The agency takes over your browser history in this creative campaign for the International Rescue Committee.

BBDO New York has created a powerful web browser experience in a bid to change the course of history this World Refugee Day.

The agency teamed up with the International Rescue Committee and Getty Images for the moving campaign that takes the form of a timeline.

Changethecourseofhistory.com tallies the number of people who have been made homeless by major events from the start of Operation Linebacker in Vietnam to the Yemen civil war. The timeline ends with a live count of refugees around the world.

"The word ‘crisis’ gets used a lot, but often when you look closer you see that the problem is actually getting better over time -- but the staggering thing about the global refugee situation right now is that it keeps getting worse," explained Tom Markham, ECD at BBDO.

"Surely it was worse after the Rwandan genocide? No. Surely it was worse after the Vietnam war? No. It’s worse now. It really is a crisis. I personally didn’t know that and I don’t think many people do. So we wanted to get that message out there. This is happening on our watch, and is going to be one of those issues that our grandkids are going to judge us on. And when they ask us about it, what will we say we did?"

Words in the campaign lead you to your browser history to find the message, "We face the largest refugee crisis the world has ever known. But today you can choose to make a difference. Will you let history continue to run its course? Or will you help change it?" 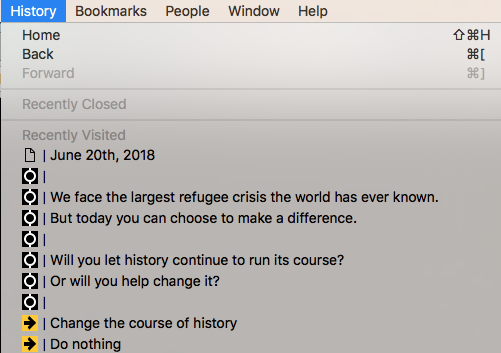 Two choices appear: "Change the course of history," and, "do nothing." Unless you have no conscience whatsoever, you’ll click on the former, which takes you to the International Rescue Committee’s website where you can pledge and donate to the cause.

Markham said the team didn’t have the money for a video shoot and edit, but did have the idea of using the history menu to leverage the impact of this crisis.

Getty generously donated all the historical images, and BBDO animated them. As it moves from one slide to the next, it invisibly loads another web page. And each time it does, it adds a line into your history menu.

"We’re hoping that this technique will make the message more compelling and memorable," he added.

"It’s hard to compete for attention with no media money, but each person who takes a moment to think about this issue in a different way makes our effort worthwhile."

Q&A: BBDO NY chief on the agency's past, present and future

Why working moms shouldn't play by the rules