The next broadcast cycle could be a defining moment.

Many aspects of the initial vision for the Uefa Champions League (conceived by Klaus Hempel and Jürgen Lenz, and championed by Gerhard Aigner) have remained intact since the original rebranding of the tournament from the European Cup in 1992.

The key idea was to have total uniformity in terms of the look and feel of the competition, from the broadcast platform to the stadium, whether the match being played was in Moscow, Munich or Manchester.

This created a premium position and commercial control that rapidly attracted an exclusive set of brand partners, many of which remain today. That is the ultimate endorsement of any commercial programme. The concept of uniformity and rigorous attention to a premium positioning arguably makes the Champions League the world’s most prestigious sports property and, based on this season, definitively its most dramatic and exciting.

The one aspect that has evolved significantly over the past 27 years is the Champions League final and, more specifically, the way it has been used by brands as a marketing platform. Here, we have attempted to identify stages of this evolution and what we believe is the next stage of development for this showpiece event.

The central feature of the Champions League final in its initial phase was that it was played on a Wednesday night and almost exclusively broadcast on free-to-air channels with little exposure outside of Europe. This meant there was limited brand activity at the final match's venue and commercial value was primarily derived from the enormous terrestrial audiences it delivered in the major European markets. 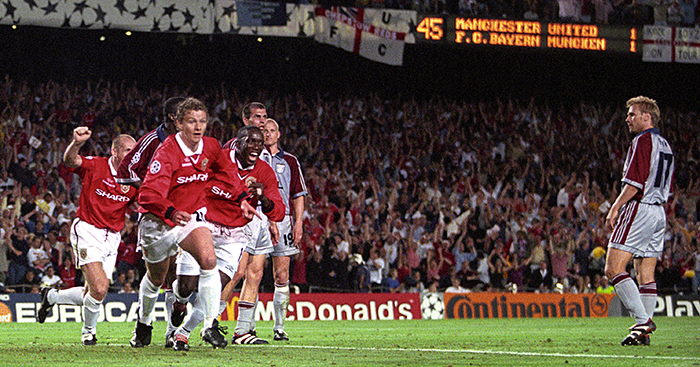 The most sought-after assets were the fixed board perimeters and, above all, the broadcast sponsorship break bumpers. Brand activation at this stage was limited to reasonably rudimentary execution of media assets, such as clear brand exposure from signage and break bumpers around the broadcast.

Although the final was still on a Wednesday night, Uefa had begun to build broadcast platforms in markets outside Europe as the power of elite European teams began to assert itself to a worldwide audience of football fans.

Media value continued to be the dominant metric for evaluation as a worldwide audience began to develop especially for the final. Nevertheless, the Champions League's exclusive assets began to become a more important element within contract negotiations and served as a basis for brand activations.

Brands involved began to identify the final as an important platform for high-end hospitality and increasingly as a platform for direct consumer promotions.

The past 10 years have seen an enormous change in the positioning of the final as an integrated marketing event with global significance.

The key change was the reallocation of the final to a weekend slot; this started in Madrid in 2010. This allowed the development of a weekend "festival of football", with the final as its centrepiece.

In parallel, Uefa evolved the concept of "fan festivals", first trialled at the 2004 European Championships and came of age in the 2006 German World Cup. Finally, brands had both the showcase and the means to build high-profile and exciting activations that could engage audiences and consumers well beyond the 60,000-80,000 lucky enough to have tickets for the game.

These fan festivals now run from Thursday to Sunday, providing a significant window for brand activations and becoming centrepieces to standalone campaigns in support of the final itself.

In each successive year, Uefa and its partners have taken the hospitality village to new levels of sophistication. It is now one of the highlights of the sporting calendar and, if this year is anything to go by, the hottest ticket in elite sport.

Paradoxically, as brand activations and the importance of the final as an engagement platform has grown, the importance of media value has stagnated as Uefa has opted for money over audiences in its choice of broadcast partner. This has been partially offset by making the final available on live stream in certain markets (eg the UK).

The Champions League final has entered an era of maturity, with elite sports now the most prized marketing platforms for brands seeking a global audience. This includes creating standalone content campaigns for the final, as perfected by Heineken…

…through to integrated experience campaigns such as Hotels.com’s "Champions retreat", which is debuting in Madrid this year.

And, of course, there's Pepsi, which has brought some Super Bowl big-event experience to the final with the introduction of the pre-match show since its involvement as a sponsor began in 2015/16.

The example of Pepsi’s approach alludes to the next stage of the Champions League final’s evolution – a genuine competitor to the Super Bowl as the biggest global sports marketing platform available to brands.

In terms of audience, the Champions League final is the bigger draw globally: Saturday’s game between Liverpool and Tottenham Hotspur is expected to deliver a larger global audience than the Super Bowl. While the US TV audience for the Champions League remains modest (around two million viewers), the global TV audience for last year’s final between Liverpool and Real Madrid was placed at 160 million. By contrast, the largest-ever global Super Bowl audience was 114 million.

From a brand activation point of view, we have yet to see brands create specific Champions League final above-the-line campaigns or a scenario where the commercial activations rival the action on the pitch for talkability and digital traffic.

This element of uniqueness as an advertising "moment" is something that the Champions League cannot yet replicate and therefore, at this stage, it cannot be considered to be quite at the level of the Super Bowl as a brand activation platform (brands that advertised during Super Bowl 2019 include Budweiser, pictured top).

Part of this is driven by the fact that the Champions League final is behind paywalls across many key markets for major global brands. Despite greater overall global broadcast numbers (driven by Latin America and south-east Asia), the final does not deliver the same guaranteed in-the-moment above-the-line scale that the Super Bowl half-time slot does.

The next Champions League broadcast cycle (post-2021) could therefore be a defining moment in the further evolution of the final as a global marketing event.

There is no question surveying the 27-year history of the Champions League final that it has developed in a hugely impressive manner and can still improve as a spectacle for its billions of fans and commercial partners. Nevertheless, maintaining a balance between the authenticity of the football, the need for spectacle and the demands of sponsors will require careful judgment.

Joel Seymour-Hyde is head of UK and Phil Carling is managing director, football, at Octagon

The past and future of sports fan engagement

Let's cheer on the Lionesses and smash the grass ceiling