Marketers are investing in digital channels, adding online and social elements to their existing programs

Major brands are making big investments in their cause marketing and digital and social media for their holiday season campaigns, with companies from Toys R Us and RadioShack to Build-A-Bear Workshop and TJ Maxx boosting their spending in one or both areas.

The spending bump is taking place as an ever-increasing percentage of holiday shopping is happening online — eMarketer predicts it will hit 9% of total retail sales this year or $79.4 billion, up from 8.3% last year — and from both multichannel retailers and online-only shops.

The tools used to track spending have evolved, too. EBay has produced an interactive holiday "heat map" using its data to show the season’s most in-demand items. Last year, the color-coded map only tracked toys, but the 2015 edition covers categories such as fashion and electronics.

The map will be hosted on eBay’s holiday hub, set to launch next week, and on its social media properties.

Kari Ramirez, comms manager for North America at eBay, says that one goal for the map is to drive listings from sellers and, in turn, attract buyers.

"We are making sure our sellers see the map. We want it to become a resource for them as they post things and to help them market some of the items that are trending," she says.

The project, which brings together data insights, marketing, social and PR, has long legs from a marcomms perspective, Ramirez adds.

"What will make this fun is that it isn’t a one-time [media] hit. The story will become about what’s trending from week to week and why," she explains. 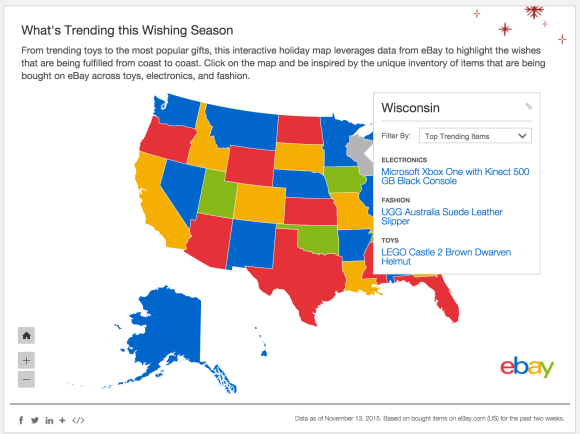 RadioShack is spending nearly all of its holiday marketing budget on digital comms and PR, says Michael Tatelman, CMO for the electronics chain. General Wireless, an affiliate of hedge fund Standard General, acquired the RadioShack brand and 1,733 of its stores this spring in partnership with Sprint. RadioShack had been in bankruptcy protection at the time of the deal.

"When a company goes through a challenge like RadioShack, the stores get pretty barren," Tatelman says. "We’ve spent the last six months getting back in stock position."

The chain is basing its holiday strategy on the fact its Black Friday deals start on Wednesday and that stores open 8 a.m. to 1 p.m. on Thanksgiving. The Speakeasy Agency, which handles PR and social media for RadioShack, brokered a media exclusive on the early sales start with USA Today.

"We also hit the phones to make sure local broadcasters, newspapers, and digital and social outlets got the news," says James Curich, cofounder of the Speakeasy Agency.

RadioShack is also frequently posting on its social media channels, including rolling out a digital ad on Thursday. Apart from some print ads in publications targeting Hispanic consumers, "We really have a digital-only platform," says Tatelman. "There are a novel products and platforms to deploy our message that offer great analytics. We will continue to use them throughout the holidays."

Cheryl O’Brien, PR manager at Toys 'R' US, says the retailer is focused on having a greater presence on digital channels this year, such as Facebook, Instagram, Snapchat and YouTube.

Called AWWWESOME, the holiday campaign imagines what goes on in toy stores after hours and heartfelt moments between loved ones. Toys 'R' Us has also partnered again with The Mommyhood Chronicles for a Twitter party scheduled for Tuesday.

"The holiday season is a very important time for our company and it’s a very crowded space competitively speaking," O’Brien says. "It’s important that we find ways to break through the noise and truly connect our brand with gift-givers in a way that encourages them to shop with us."

Twitter is also the platform of choice for a holiday campaign uniting TJX Companies’ retail brands: TJ Maxx, Marshalls, and HomeGoods. The Bring Back the Holidays campaign "is different than what we’ve done in the past because this is largely a social media campaign using Twitter as the main launch platform — something we haven’t done before," says Gina Bollus, PR manager at TJX.

The campaign invites shoppers to share on Twitter using the hashtags #BringBackHolidays and #contest how one of the brands can help them or a loved one during the holidays. Winners will be rewarded with travel gift cards, having their homes decorated for the holidays, or with a special delivery of gits.

"Twitter seemed like the right place to host this conversation because it allowed real-time engagement and an easy platform for people to share," says Bollus. "In the end, what matters most during the holidays is spending time with friends and family. This year we really wanted people walking away knowing that we share that same value."

Edelman, TJX’s AOR, is providing support for the campaign.

A bigger focus on cause marketing
Toys R US and TJX’s holiday campaigns both include holiday giving pushes, the former with the Marine Corps’ Toys for Tots Foundation and the latter with 130 food banks across the US.

At Ketchum, retail clients such as Wendy’s and Build-A-Bear Workshop have integrated strong charitable components into their holiday efforts, says Bill Reihl, the agency’s partner and managing director for the global brand marketing practice.

"Cause has always played a role, but is becoming more and more important and more strategic," he says. "Marketers are certainly attuned to the fact that it is the feel-good time of the year and have created cause programs that are very aligned with their brand ethos."

Reihl notes such programs can offset pessimism about the commercialization of the holiday season, particularly given that brands are trying to get out earlier on the calendar to be heard. Yet he says those worries are overamplified.

"You do hear the lament that ‘Oh gosh, it’s Halloween night and Christmas trees go up.’ On the same hand, I see so many posts online like, ‘I am so excited to see the scaffolding go up for the tree in Rockefeller Center,’" he says. "Also, in the rest of the world where they don’t celebrate Thanksgiving, you see Christmas start in early November."

Reihl adds: "There will always be a camp of people who will talk about the over commercialization of the holidays, but in general, they are a welcome experience for most."

Stuffed animal retailer Build-A-Bear Workshop has partnered with nonprofit organizations in its three geographic markets. In the US, it is working with the Marine Toys for Tots Foundation for the eighth year, in Canada with amateur hockey leagues on a "Teddy Bear Toss" to benefit local children’s charities, and the UK with Barnardo’s and its young careers program.

The partnerships in Canada and the UK are new.

Beth Kerley, senior manager of marcomms for Build-A-Bear Workshop, says "it’s important for us to strike a balance between running a business and finding ways to better serve our communities."

She adds that a "straightforward, easy-to-activate giving element helps lend substance to PR and marketing programs, especially for retailers trying to capture the attention of consumers and media during the holidays."

Its PR effort for the holidays started with kick-off events, and it also includes paid partnerships to supplement traditional media and influencer outreach.

"For example, we’re working with a toy industry influencer to showcase our line-up to broadcast media, and participating in an exclusive gift-preview event with celebrities in early December," Kerley notes.

Given all the opportunities for shoppers to give back outlets, nonprofits are also strategizing to be heard during the Thanksgiving-Christmas period. Jennifer Byrd, national communications director at the Salvation Army, says, "It’s our most critical fundraising period."

And like for-profit brands, they are turning to social and digital channels.

For the past 125 years, the Salvation Army has relied on its Red Kettle campaign, which included the #RedKettleReason Twitter component last year to encourage Americans to share their reasons for giving. This year, consumers are being invited to answer that question with a video for the chance to win a contest.

Today will follow the contest winner as he or she shops for toys and necessities in New York befitting a local Salvation Army. The winner will be accompanied by singer-actor Nick Cannon, who is serving as a brand ambassador for the nonprofit this year.

"We’re always looking for new ways to reach the next generation of donors, and Nick stood out as the perfect fit to help us tell the Army’s story," says Byrd.

Richards Partners is the PR AOR for The Salvation Army's national headquarters, including the annual Red Kettle campaign.

When did Agency of Record become a dirty word?

Why every day is #WorldToiletDay at American Standard

Why I left the nonprofit world for brand citizenship