When EE wanted to drive awareness of its flagship Wembley Stadium sponsorship and align it with a BT Sport launch among the hard-to-reach millennial audience, it turned to YouTube to bring all those strands together. By Sam Mikkelsen, industry manager, Google

Since its launch, mobile operator and internet provider EE has focused on being the preferred choice for young, active, 4G-hungry consumers in the UK. One of its key demographics is under-25s who love football.

In 2014, EE completed a six-year deal with the Football Association to become Wembley Stadium’s lead partner. This was intended to help drive awareness of the new EE brand and allow it to demonstrate the power of its network.

EE is a division of BT Group and thanks to a recent partnership to offer consumers a free promotional period with BT Sport on the EE network, EE has been able to dramatically enhance its sports content for subscribers.

EE’s core audience of 18- to 30-year-olds presents a problem. Millennials spend far more time glued to their smartphones than to the TV, so they are hard to reach via traditional media.

In 2016, EE’s goal was to improve its emotional connection with its entire customer base, but particularly with this younger audience. Digital has always been important to EE, but whatever the company did in this space had to be relevant, authentic and, most importantly, innovative.

The company also wanted to cement its position as a leading distributor of mobile entertainment, particularly music and sport, the latter through its exclusive agreement with BT Sport.

Any campaign had to build awareness for BT Sport, highlight EE’s Wembley relationship and drive brand consideration – all across a hard-to-reach audience.

YouTube has a particular affinity with EE’s campaign target age group of 16 to 24-year-olds (within its wider target group of 18 to 30-year-olds).

Critical to the channel’s success is the relatability of the influencers who regularly broadcast on it and the sense of audience participation.

YouTubers create content for people just like them and it is often a collaborative process. The influencers often invite viewers to join them by posting vlogs and conducting live chat in the comments below the video. Viewer suggestions frequently make it into the videos. This format appeals strongly to millennials, of whom the 16- to 24-year-old age group is a significant segment. This cohort values authenticity, peer networks and control.

The Wembley Cup was conceived in 2014 just as YouTube was coming into its own as an influencer channel.

The decision to hold a match in late summer 2015 featuring celebrity influencers meant EE’s recently signed sponsorship of Wembley Stadium dovetailed with one of the top obsessions on YouTube – football.

In 2015, EE partnered leading football YouTuber Spencer FC (1.8m subscribers). The campaign revolved around 10 teaser videos detailing "the road to Wembley", in which Spencer could be seen getting other YouTubers on board (notably Joe Weller, who has 4.2m subscribers and would go on to lead the opposing squad in series two).

These ten videos garnered significant viewing figures in the lead-up to the first Wembley Cup, achieving the goal of becoming the biggest football match in YouTube history.

Success for EE was not far behind. The campaign generated more than 650,000 video "likes" and 35 million views, of which 11 million were of the final alone. Results from the first Wembley Cup were hugely encouraging, but, if anything, they demonstrated that there was a lot more opportunity to connect with football fans, influencer audiences and EE customers, present and potential.

Learnings from series one

Feedback from fans highlighted two things. First was that viewers wanted to keep the YouTube spirit of co-creation going and be able to influence what was going on during the run-up to the cup. EE learned that brands using YouTube have to appreciate that it is much more than a broadcast channel on desktop or mobile – it is a conversation.

Second, with 11 million watching the videos but no viewers actually able to watch the game at Wembley, there were an awful lot of disappointed fans who wanted to be part of the big match.

As a result, EE integrated fan action into the campaign, getting them to help pick the teams, vote on content and ultimately help decide who would be playing at Wembley. Indeed, the motto for the 2016 Wembley Cup event itself was: "The game is in your hands."

The road to Wembley

Once again, EE partnered Spencer FC’s channel and fellow YouTuber Weller got back on board, this time to lead the opposition.

• Two trailers (one each for the series and final)

• Base communications email and 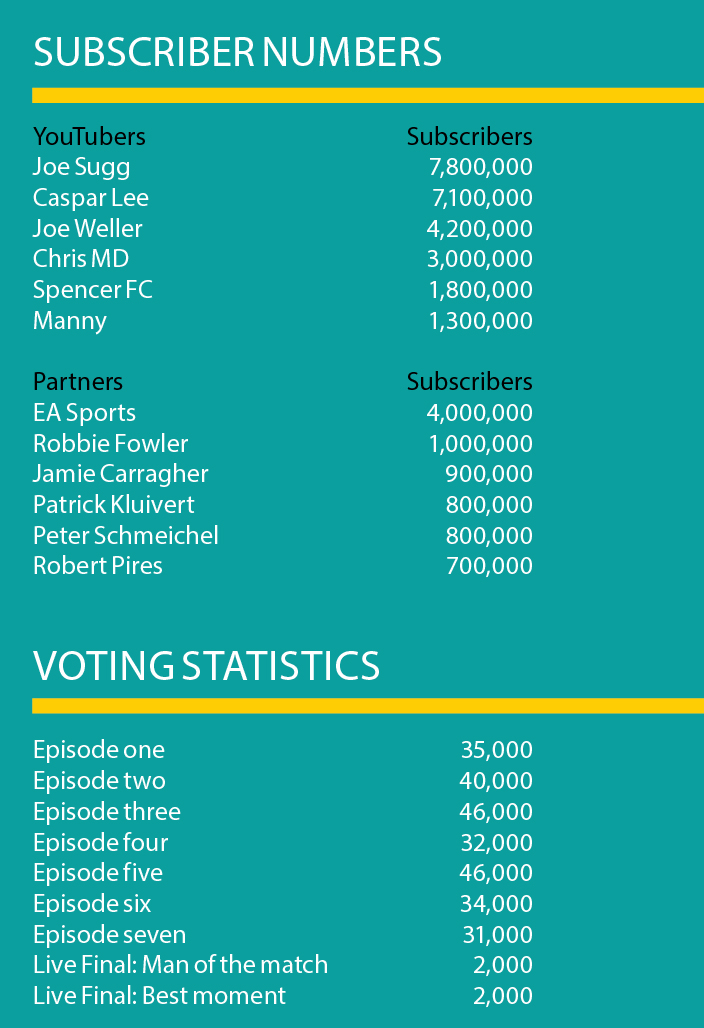 In 2016, EE managed to widen its reach through groundbreaking partnerships with EA Sports and Xbox, tying the Wembley Cup to the launch of the much anticipated FIFA 17 video game.

A final coup de grace was to bring together not just the legends of YouTube but bona fide football legends as well to face off against each other at Wembley in front of a crowd of 22,000.

While the stars of football seasons past may not mean as much to the new millennial audience, they proved a draw to those looking to catch up with former top players Robert Pires, Robbie Fowler and Peter Schmeichel.

The campaign was fully interactive with Spencer FC participating in polls through his Twitter feed to help pick teams as well as five polls run during the live final itself.

All this activity ultimately led up to the two-and-a-half hour live-streamed final from Wembley Stadium as the Wembley Cup played out in front of 1.5 million viewers alongside the 22,000 ticket-holders in the stadium.

Nick Farnhill, chief executive of EE’s digital agency, Poke, said the YouTube campaign created an atmosphere that felt like "a genuine build-up to a cup final". EE UK brand director Pete Jeavons added: "It has genuinely deepened the emotional connection with our customers."

EE launched the second series of the Wembley Cup to raise brand consideration among a hard-to-reach millennial audience, raise awareness of its ongoing relationship with Wembley Stadium and highlight its commitment as the consumer’s sport and entertainment partner through its BT Sport partnership.

YouTube exceeded its audience target by 25%, gaining 40 million views, eight million above the 32 million target. In total, 65% of the viewers were in EE’s target audience demographic.

In paid media, the share was bigger still, at 81% of viewers. Cementing EE’s position as a provider of sport and entertainment on the go, the majority of views, 41%, were via mobile, with a further 26% on tablet. Brand recall and brand favourability are up 7.8% and 6.3% respectively for the EE brand.

The EE/YouTuber collaboration proves customers will engage with content – even if, like the Wembley Cup content, it is brand-led and longer than the standard length for the channel – as long as it is relevant and involving.

EE focuses on targeting as it unveils personalised ads

EE has red-carpet moment at the Baftas

EE "The Wembley Cup" by Poke