Winston Binch, chief digital officer and partner of Deutsch North America, is considered one of advertising’s most innovative creative technologists. But don’t call him a digital expert. "I'm an explorer, not an expert," he says. "I continue to learn."

Exploration is a thread that runs throughout his career. After starting out in the ‘90s as guitarist in an indie band called Stereobate (they didn’t get signed), Binch became director of production at SonyClassical.com. Then, after digital services like Napster disrupted the music industry, he joined R/GA as a senior producer. From there his path led him to Crispin Porter + Bogusky in 2005 with the brief to help "turn this great idea company into a technology innovator." In 2011, he moved to Deutsch, with the goal to make innovation the core of everything the agency did.

Since joining, Binch says the agency’s digital revenue has increased from 3% to 40%.  Now, they are building up their in-house production capabilities to match their in-house technology resources, all with the goal of creating a high-tech, high-concept creator culture. "A lot of people talk about this notion of an integrated agency," he says. "We just like to think of ourselves as a maker agency, an agency that doesn’t just come up with ideas, but also loves to make shit and has the passion for it."

Here are the five executions that Binch says define him: 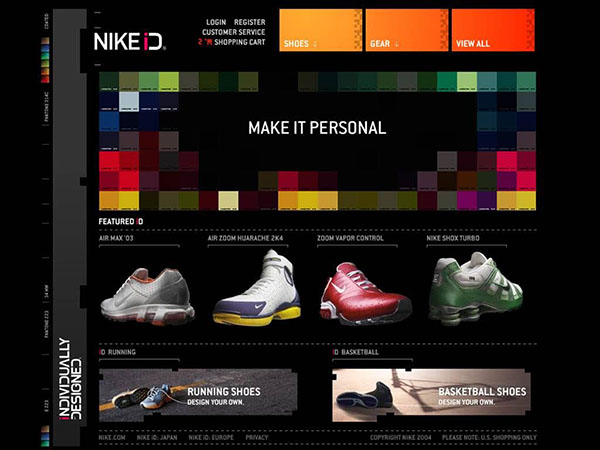 As director of production at SonyClassical.com from 2000 to 2003, Binch received a crash course in web development and digital marketing, designing and producing web sites for classical musicians. But it was at R/GA that Binch says he got his "master’s degree in web design and development." Case in point: as a senior producer at the Interpublic Group shop from 2003 to 2005, Binch led the design and technological development of the award-winning NIKEiD.com site — which at the time represented a new frontier in product customization.

NIKEiD was the project that "most changed my career at that point, or best epitomized what I learned" at R/GA, he said. The site won the 2005 Industrial Design Excellence Award and a Gold Cyber Lion in Cannes in 2004, among its honors.

The Nike experience also gave him a skill and appreciation for what it takes to create a great online consumer shopping experience that he carries with him until this day. "I fell in love with e-commerce, because to me, e-commerce is creativity with consequences," he explains, noting that NIKEiD was one of the company’s first e-commerce groups to become its own business unit. "You can have big ideas, but at the end of the day, if you're not driving conversion, you're failing. I love that kind of high-stakes type of creativity that we now call systems thinking or platform design."

"The real magic behind the pizza tracker was that it originally was a backend tool that the IT group had used to really track feedback and efficiency within their point of sale system," Binch notes.

Tasked with relaunching Dominos.com, Binch discovered a piece of technology in the brand’s arsenal that had the potential to do much more. "The first thing you want to do when you get in and work on a platform is do technology archeology," Binch says. "You dig around and figure out what you have available within your technology stack." What he found was an internal tool for tracking orders and rooting out inefficiencies "that was something that we found pretty remarkable, and something they had also expressed interest in finding ways to use for their marketing."

Binch and the agency team transformed the internal tool into the Pizza Tracker, a feature that allowed customers to follow the progress of their order as their pizza went from order placed, to prep, bake, box and delivery. "It was a great marriage of marketing and technology," he said.

Domino’s went from being third in online pizza ordering to first. In the first 16 months after the launch, site visitors increased 70%, online orders increased 165%, the conversion rate increased 57% and more than 10 million new users registered to the site. And in 2010, it also became the fourth largest e-commerce site based on transactional volume, behind Amazon, Staples and Office Depot. "For an ad agency and a consumer food brand to ascend the ecommerce ranks so significantly was pretty amazing," says Binch.

What did Binch take away from the experience? "The best ads aren’t always ads," he says. "That was a great case of that piece of technology and that experience not only serving as great advertising for the brand but also something that generated millions and millions of dollars in sales. The kind of creativity that has real impact, both from a PR perspective but also from a conversion and sales perspective."

It was the early days of social networking, and the race was on to turn sites like Facebook into marketing platforms. "At that time, we were all trying to figure out, what is a digital friend?" says Binch. One day, fellow Crispin creative Jeff Benjamin looked at the thousand friends he had amassed on Facebook, and confided in Binch: "This is really strange because I only have, like, one friend in real life."

"I was like, ‘Wait, what do we do with all these people?’" recalls Binch.

The result was Whopper Sacrifice, an app that rewarded Facebook users with a free Whopper for every 10 friends they deleted. The app was installed more than 600,000 times; more than 200,000 friends were deleted; and more than 20,000 coupons were given away in just over a week.  "We hit a cultural nerve around friending and unfriending," Binch says.

The promotion also hit a nerve at Facebook, which didn’t appreciate the app sending notifications to users who had been unfriended. "We had a cat and mouse kind of thing going on," remembers Binch. "They started hobbling the app." The pushback was soon turned into a press-generating ending to the campaign, when the agency put up a page saying that the Whopper Sacrifice had been sacrificed.

The campaign "won every award under the sun," including a Titanium and Integrated Lion at Cannes in 2009. And "unfriend" became Oxford’s 2009 word of the year. "We like to believe we helped make that happen," Binch says. 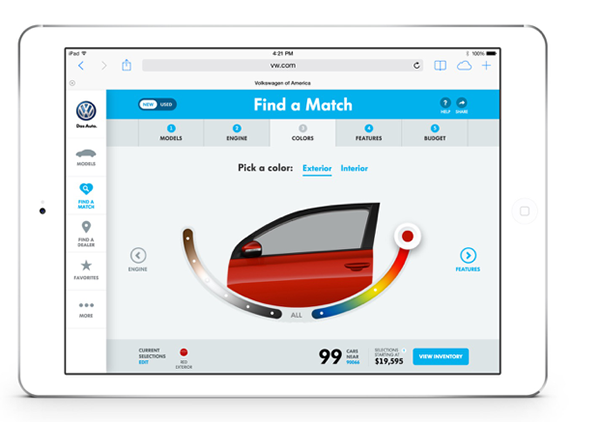 It’s not often that you see a car company take its lead from dating sites, but that’s exactly what Deutsch — which Binch joined as chief digital officer in 2011 — did when it re-launched Volkswagen’s website two years ago.  The agency introduced the "Matchmaker," a site that promises to find a person’s "perfect VW" by pairing car preferences to available new or used vehicles in their area.

The idea came out of one of the main insights uncovered during the agency’s research. While car sites have configurators allowing people to pick the features they want in a car, potential buyers often couldn’t actually find that car when they went into dealerships and were instead offered similar options. "We felt that that was kind of messed up, and out of step with what people really want," says Binch.

The agency wanted to create a site experience that actually delivered on its promise and designed it much like a dating site. "We found this interesting analogy, that buying a car is a little bit like finding your mate, like dating, because it involves both rational and emotional decisions," explains Binch. The standard configurator was transformed into a "Find a Match" tool and after users identified their preferences they were given a selection of their best matches using geo-location and real inventory.

The revamp was successful. Sales leads went up 60% and the web site won a Silver Effie. "We turned this website into what I call an ad and an ad that worked," Binch says. 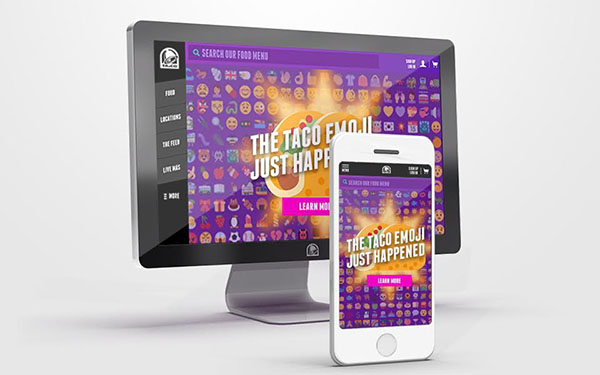 "Taco Bell’s mission is about ‘Live Mas,’ which is really about shaking out the ordinary and igniting the unexpected," Binch says. "They do that so well with their food invention and innovation. We wanted to apply that same type of thinking to their web platform."

The problem was, Taco Bell consumers weren’t used to ordering their food online and a lot of them didn’t want to. The agency’s research showed that 57%  of people said they would never visit a quick service restaurant’s website. "We found that kind of alarming," said Binch. "The mission was finding a creative way to essentially rebrand the fast food web site and get people there by creating new value and meaning for it."

They did that partially by embracing the aesthetic of photo-centric platforms like Instagram and Pintrest that are redefining the social space. The agency turned the word taco into a URL and created an online experience for the brand that felt vibrant and fresh, as if its own fan community had built it. The site Ta.co gave users the ability to customize their orders and pay online using their desktops or tablets, adding to the smartphone-ordering capability the fast food chain already had in place with its Live Mas app.

The site uses the type of photography seen on most social media feeds; the pictures show the tacos and burritos in the hands of consumers and were shot on iPhones, and are organized in grids that look like they could have come off Pintrest. The site also includes a blog page called "The Feed" that shares news and showcases curated content related to the brand. "It’s really pushing this notion of a social experience throughout," says Binch. The site received 3.8 million unique visits in the first month after its launch and average orders that were twice as much as the average in-store order.

"It’s a nice punctuation" in his career because it "really is a marriage of creative and technology," he says. "When you look at the level of creativity from a design perspective and user experience, it’s a rare and remarkable platform. This comes back to this notion of us believing the best ads aren’t always ads, they are a platform, product or a piece of packaging, it’s not new math in marketing, but it’s hard to do. And for me this is the kind of work that we want to be doing more of."

My career in 5 executions: Margaret Johnson

Why it's time to ditch your five-year agency plan

Three years in, one CEO's lessons

DDB's Sonal Dabral on starting your career, choosing an agency and staying curious

5 Super Bowl ads that were worth the wait