Name: Tham Khai Meng
Title: Worldwide Chief Creative Officer and Co-Chairman, Ogilvy & Mather
Years in industry: "Close to 30"
First job in industry: While a student in London, worked as a writer at Integral Advertising, a now-defunct four-person agency above a truck garage in London.

Tham Khai Meng oversees the creative work of more than 500 Ogilvy & Mather offices around the world. Under his leadership, the company has been named Network of the Year at Cannes each of the last four years.

"You’ve got to stop someone in their tracks, otherwise it’s a waste of money," he says, summing up his creative philosophy. "I call it 'the three-second test.' You’ve got to prevent someone from turning the page too quickly, so you have to arrest the audiences’ attention. That’s when you charm them, or make them laugh. But it has to be a very single-minded emotion."

Here are the 5 executions that Tham says sum up his illustrious (and much awarded) career so far.

These "single-minded short narratives" represent what can be done on a "tiny budget," says Tham. "It goes to show that all you need is an idea."

"When you are working on a really tight budget, every cent counts, every frame counts," he says. "The low budget forced us to take a creative leap. I always believed that you need constraints to do great work. Given too much freedom, it’s dangerous – it’s true. More of us should do low-budget work, because it teaches us discipline. That’s the power of the idea."

Tham got used to seeing buses "filled to the brim" with passengers while hitchhiking around India as a student. Years later, he wrote the script for this wordless, yet universally understandable spot on the back of a napkin.

"This is a local product, and you’re selling to Indians," he says. "From the deserts of Rajasthan to urban Mumbai and Dehli, Kolkata or Cochin or Kerala – everyone just understands this ad. And the great thing is there’s no narrative, no words spoken, so everyone from a grandmother to a 7-year-old kid can understand this, not just in India, but in New York. The idea is just timeless." 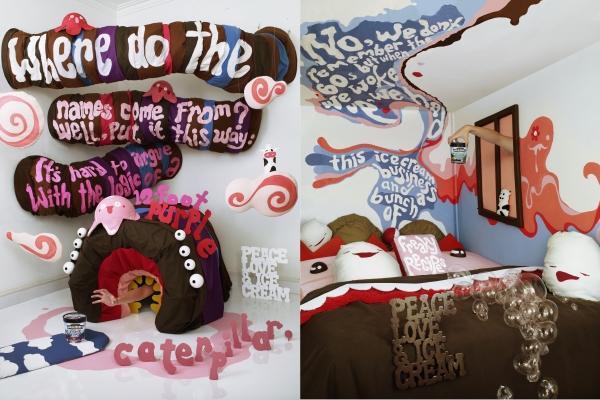 Tham was eating a pint of Cherry Garcia when the idea for this psychedelic print campaign came to him. "Everything was so slick at the time," he recalls. "If it’s too slick, it’s not Ben and Jerry’s. And we thought, why don’t we do this for real? Forget about illustration, that’s too easy. We built it by hand."

"Each set was built in our art director’s apartment," he explains. "His girlfriend was going ballistic."

What lesson did he take from this? "To do great work, we not only have to believe in the product, but be steeped in it," he says. "We have to interrogate it until it surrenders its strengths. Only with this deep belief will you then have the vitality that you put into the work."

The Australian Coke promotion that became a global phenomenon worked because it tapped into the universal desire to be famous, says Tham. "People love to hear their name, let alone have it written. Something magical happens, because that’s your brand, and you’re associating it with Coke." Now people in more than 70 countries can get their names custom-printed on the bottle.

"We are all salesmen here," he says. "Let’s not forget our role – deploying art, music, writing in the service of our brands." This promotion "put Coca-Cola sales back on track for the first time in over 10 years. Today, we’re still running this. I think it’s going to stick around for a long time."

"We started the Campaign for Real Beauty in 2004," he recalls. "Unilever found the startling truth, that only 4% of women use the word ‘beautiful’ to describe themselves. What started as an insight — we called it insight then, today we call it data — has given us great leverage, and who knows where this will take us. Because this is transformative. This brand platform is huge. It’s big enough for humanity to sit on."

My career in 5 executions: Vann Graves

My career in 5 executions: Margaret Johnson

Show me your shittiest work

My career in 5 executions: Winston Binch

Tham Khai Meng: 'Data is not new. We are just seeing it in a very new way'