From cable czar to Dockers dads, RTO+P's founder and CCO keeps pushing forward to the next idea

Steve Red had a circuitous path to advertising. He began as a journalism major before dropping out to pursue painting. Four years later, he ended up in art school and segued to illustration, which he hoped would be more lucrative. A professor hinted that ideas were his strong suit and suggested he try advertising.

After graduating, he landed a gig at Walnut Equipment Leasing Company, which led to stints at small ad agencies. Eventually, Red made his way to Earle Palmer Brown, a now-defunct DC-based agency that at one time had offices across the country.

There, Red met Ed Tettemer, who worked as his writing partner. Five years later, in 1996, the pair left to form Red Tettemer in Philadelphia. In 2013, the agency opened an office in California and put ECD Steve O’Connell’s name on the door, rebranding as Red Tettemer O’Connell + Partners.

A creative needs to keep looking for the next idea, Red says. "Push to find ideas that have a place in the world. And once you’ve found them, believe and commit."

Here are the 5 executions Red says define his career. 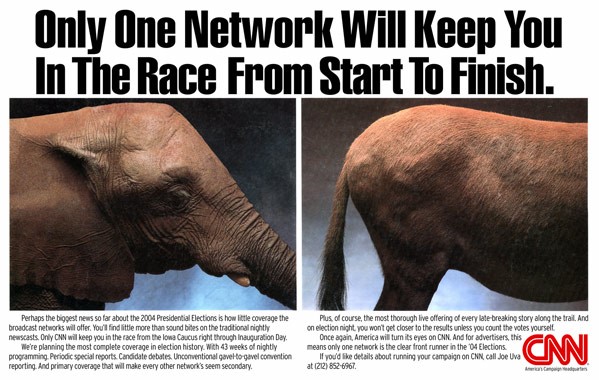 Earle Palmer Brown worked with all the networks owned by Turner Broadcasting Company. It wasn’t seen as a desirable account for a creative to work on. "For ad agencies, cable was sort of a bullshit business at the time," Red says, "and the ads ran in things like Multichannel News and CableWorld."

But when Red and Tettemer began planning their own agency, they built it on the backs of those cable relationships. "That’s what we parlayed into our first pieces of business," he says, and some of the fledgling agency’s earliest work was made for ESPN and Cartoon Network.

At the time, cable company ads were, for the most part, transactional, describing how a technician would come connect the service for a particular price. Even four years into the client relationship, "we weren’t allowed to say the word ‘brand’ in a Comcast meeting," Red says. "They didn’t really understand brand building or want to talk about storytelling. It was a constant effort on our side to up the game and inspire them around advertising that wasn’t so retail."

In the first eight years of the agency, the business grew as the cable category exploded. Red Tettemer was agency of record for Comcast, Time Warner Cable, Cablevision and Insight Communications, all at the same time. This was before they had become the national behemoths they are today. "There was no competitive overlap," Red says. "It was an odd time, because agencies weren’t looking to those companies for business, so we were kind of the only game in town."

Years before "I Will What I Want," before Gisele or Misty, Under Armour was struggling to break into the women’s market. "They really didn’t have a women’s brand to speak of," Red says. This social campaign enlisted women to help Under Armour define what that women’s brand was going to be about, and "it convinced them that it was a viable business for them to be in.

The campaign led directly to RTO+P landing the Planet Fitness account. It also impressed potential clients outside the category, like investment management firm T. Rowe Price, which hired the agency to help it sell 529 college savings funds. "They saw the power of building a community and uniting people around a central inspirational notion," Red says.

Planet Fitness was "almost the polar opposite" of Under Armour, Red says. The campaign targeted people who weren’t motivated to join a gym. Spots were inspired by the creative team’s own experiences with fitness—a drill sergeant was modeled off Red’s own personal trainer.

"I would walk in and he would say, "’Today, I’m going make you puke!’" Other people had tried hot yoga, which made an appearance in the campaign. Focusing on recognizable, trendy fitness fads helped Planet Fitness grow into one of the largest gym brands in the country.

Dockers wasn’t cool, and the brand knew it. RTO+P’s challenge was to bring in new customers without alienating the ones who still liked the brand. "We hit upon this common villain in ‘dad pants,’" Red says.

The agency recognized that many of the buying decisions they were trying to motivate would be made by women, so they brought in Sarah Harbaugh. "It resonated with a lot of people, especially women in San Francisco," where Jim Harbaugh was coach at the time, Red says.

The spot was the most watched video on YouTube the month it premiered, and RTO+P followed up the following year with another, more musical spot for Dockers.