From Nike to Google, Red & Co's founder creates work that inspires, for brands that make a difference.

Mira Kaddoura was born in Egypt and raised in Lebanon and Toronto, speaking Arabic and French—she didn’t begin formally studying English until college. In design school, she wanted to push her conceptual work and hadn’t considered advertising until a professor mentioned the new VCU Brandcenter.

Richmond was her first time living in the U.S., and coming from Beirut, she was shocked that everyone seemed to believe what they saw in the media. Nobody in Lebanon believed anything without scouring every source they could find first.

That realization led to an art project, an installation comprised of media images and a suggestion box that emptied directly into a paper shredder. Somehow, word of it reached Dan Wieden, and Kaddoura was offered an intership at Wieden+Kennedy in Portland, where she stayed for 10 years before striking out as a freelancer.

In 2013, she founded Red & Co., and two weeks later, Google came knocking. "Being both Middle Eastern and a creative woman in advertising is somewhat of an anomaly," Kaddoura says. "I've always seen this as such a huge advantage because it made me open, compassionate and hungry to bring my way of seeing the world to everything I do. Somewhere along the way, it became necessary for me to not only be creative at work, but create an entire life that inspires me."

Here are the 5 executions Kaddoura says define her career.

This spot was one of about 20 scripts Kaddoura helped write in just a few days, during her internship at Wieden+Kennedy. "You get thrown a brief, and suddenly you’re shooting a TV spot," she says. "It was my crash course in learning how to brainstorm and craft 60 seconds of film."

After her internship ended, she had decided to find a job in the industry, and was eyeing positions closer to her family. But W+K made her an offer, cementing Portland as her home base. 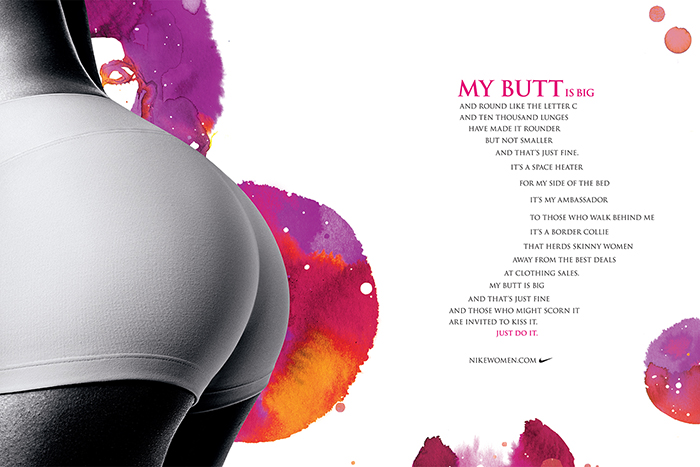 During her first few years in advertising, Kaddoura was focused on exploring the limits of what she could create, the "kookiest, craziest things." But around 2005, her perspective began to shift. "It took a little bit more maturity," she admits, but she realized "advertising can be a tool to make things better and to connect to people on a really deep level."

To this point, Nike’s advertising has been geared toward men and superstar athletes. "I learned the power of a big idea," Kaddoura says. "Despite a tiny budget and not buying media outside the U.S., this campaign sparked a national and international conversation." It also marked the first time she felt empowered to create work she believed in.

Even with the success of the Nike Women’s campaigns, the main brand had never run a TV spot highlighting the prowess of a female athlete. "We were completely aware that it had never happened before," Kaddoura says, "so we wanted to create something super. It was a chance to prove to the client that you can do something just as impressive."

At the time, Maria Sharapova was herself struggling to be judged by her accomplishments rather than her appearance, an insight the spot tapped into. "She needs to get the respect she deserves," Kaddoura says. "Yes she’s pretty, but she’s so badass."

The success of the campaign was a harsh contrast to Kaddoura’s personal life. "While I was making this film, some of my friends and family were living through a war every day," she says. "It was a huge test on how to stay focused on making great work—the things I could control—while trying to let go of the things I couldn't control.

Much of Kaddoura’s work to this point had involved sports. She’d grown up as an athlete—track and field, swimming, baseball, basketball, dance. But this was a chance for her to work on a brand dedicated to social good.

"In the non-profit world, we were used to seeing kids in developing countries with flies in their eyes and general sights people are easily turned off by," she says. "Our challenge was to highlight the problem but also offer up a solution in a fresh new way." The resulting film has been viewed more than 2 million times, and the format and look has become a staple in non-profit communication.

After 10 years at W+K, Kaddoura wanted to take more risks and create more conceptual art. "Working 80- to 90-hour weeks, it’s hard to do that," she says. So in 2011, she left the agency to work as a freelancer in Portland. Two years later, her business outgrew her small apartment, and she opened Red & Co.

Just two weeks later, Google hired the agency. A Google VP had noticed that Kaddoura had been responsible for some of his favorite work, including "I Feel Pretty" and "The Girl Effect." The brief was challenging—inspire a million girls to learn to code.

In addition to the anthem film, the agency made 12 short documentaries and 13 curriculum-based coding projects. "The amount of work that was greenlit would have been a daunting task for even a large-sized agency," Kaddoura says. "Rather than pass off the idea for someone else to execute, I saw an opportunity to road test the new agency model I had in mind."

My career in 5 executions: David Baldwin