From Truth to Tommy John, collaboration is key to storytelling for Preacher CCO.

After cutting his teeth at BBH, Arnold Worldwide, and Fallon, Rob Baird spent nearly 10 years at Mother in New York and London, working with clients like Stella Artois and Coca-Cola.

In 2014, Baird left both Mother and New York, packed his bags and headed to Austin to found Preacher, along with two colleagues from Mother. Krystal Loyland became CEO, Seth Gaffney become CSO and Baird stepped up as CCO.

In just three years, the agency has built a client roster that includes tech innovators like Squarespace and Venmo and brand behemoths like Crate & Barrel and Beam-Suntory. Baird attributes much of that success to working closely with clients. "We've gotten to help build brands and business working closely with companies, as if we were an extension of their team," he says.

Here are the 5 executions Baird says have meant the most to him and his career. 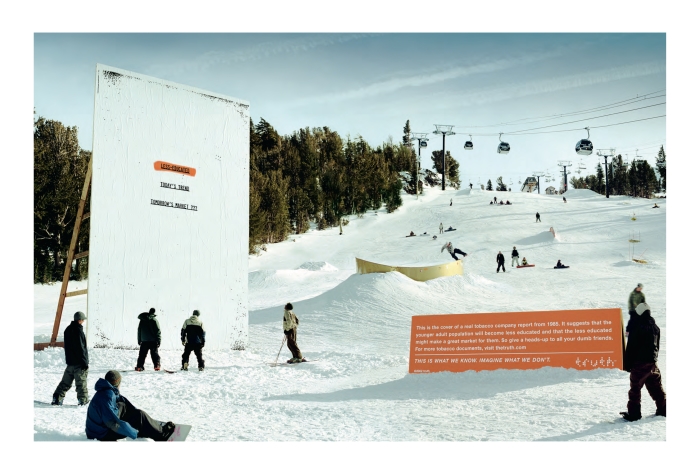 As an art director at Arnold Worldwide in Boston, Baird worked with the anti-smoking Truth Campaign, where he received a "secondary advertising education," he says. "They were doing such innovative, non-traditional marketing and guerilla design before those were awards show categories."

Arnold collaborated with Crispin Porter + Bogusky on the account, so Baird benefited from mentorship by not only then-Arnold CCO Pete Favat, but also Alex Bogusky, and got to see the benefits of working with a would-be competitor firsthand.

Baird helped to launch the now ubiquitous canned espresso drinks, working with longtime partner Allon Tatarka to dream up this absurd musical series. "The brief was pretty simple—let people know it’ll get them going on the morning," he says. "We thought up hundreds of visually interesting ways to show people getting charged up for work."

Other Everyman protagonists and classic tunes appeared in later spots, but this script allowed Baird to meet his junior high heroes, Survivor.

Baird worked off and on for nearly a decade on the Virgin Mobile account at Mother. "It never got boring," he says. "Having Richard Branson as a pillar of the brand definitely pushed us to try to make sure everything was entertaining."

Near the end of his time at the agency, he helped create this interactive YouTube series. It began as a "brochure brief, intended to hammer an apathetic audience with reasons to switch," he says. Rather than a single commercial, the agency created 25 videos that users switched between by blinking in front of their webcam. Average viewing time: 90 seconds.

After Baird moved to Austin to help found Preacher, Tommy John was one of the fledgling agency’s first AOR clients. This spot was also Preacher’s first work for the brand, and since then the agency has developed a close working relationship with both the founder and the CMO.

"Tommy John holds a special place in my heart," Baird says. "And its underwear is actually life-changing, so we feel confident spreading the good word every day."

Austin’s vibrant music scene presents agencies with opportunities to scout up-and-coming talent, but sometimes, serendipity strikes. Baird had gone to a small soul club with other people from Preacher the night Leon Bridges was playing. "We were all blown away, and even remarked that someday Preacher needed to do something together with him," Baird says.

So when Squarespace requested a musical influencer for a campaign, the agency looked him up. "It turned out Leon was a real Squarespace customer, and the next thing we knew we were shooting him with the legendary Danny Clinch for a Grammys spot," Baird said. Preacher also created a 20-minute documentary film and made Squarespace websites for both Bridges and Clinch.

"Getting to work with that many talented people we love and believe in felt like a once in a lifetime thing," Baird says. "Though I sure hope not."

'Stuck' for Tommy John by Preacher