From advertising to TV and back, McCann's North American CCO relies on a rebellious streak for inspiration

Eric Silver began his career as a young copywriter in the early ‘90s, then promptly left the industry for television. After a stint as a writer for "Late Night with David Letterman," he returned to advertising, working at Cliff Freeman & Partners, BBDO, DDB and eventually as head of his own agency, Silver + Partners.

In 2015, Silver joined McCann as Chief Creative Officer for North America. "Good creative tends to focus on utility, pragmatism and strategy," he says. But "the true measure of success in advertising is watching young teams underneath you morph into creative directors you respect and admire."

That can be a delicate process. Hearing "no" all the time can be frustrating for creatives who are just starting out in the industry, Silver says. "I think a good creative director is helping set the table for them to keep coming back."

Here are the executions Silver says have meant the most to him and his career.

When Silver first joined Wieden + Kennedy, he was given a retail project for Nike that "no one wanted." He spent months filming kids’ football games around the country, creating spots that spoofed sports documentaries. It taught him to "play humor straight, without winking."

Four of the spots ended up playing during the Super Bowl, one in each quarter. "I think they all finished at the bottom of the USA Today poll," Silver says. "And the reason I will always love Dan Wieden is simple: He sincerely didn’t give a shit about that."

Growing up, Silver was a huge fan of "Late Night with David Letterman" on NBC. Then he took a job writing for the show after it had moved to CBS. He felt it had "changed drastically, and the humor became very safe."

When Silver returned to advertising, he "had all this pent-up energy" that he channeled into his work at Cliff Freeman & Partners. "That really was the outlet for me," says Silver, describing that period as a time of rebellion and a rejection of rules. "We literally knew no boundaries, most likely to our detriment," he says.

Out of that creative frenzy came work that skated along the edge of good taste, like "Cannon."

"I don’t think any of those campaigns would get on the air today," Silver says. "I can’t think of any clients who would bless that work today. There’s just too much fear amongst marketers now." 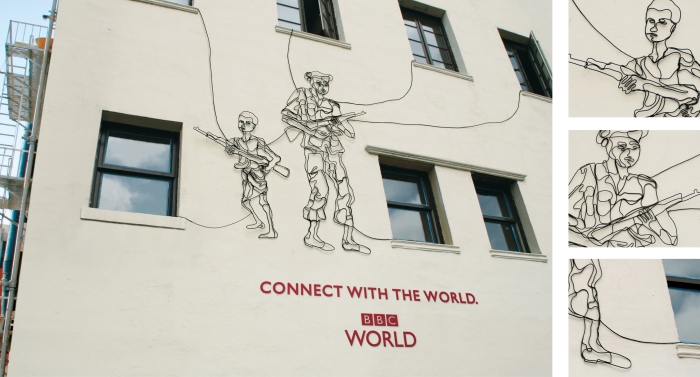 After his experimentation years at Cliff Freeman, Silver sought stability. He took a position at BBDO to work on Fortune 500 accounts and "try to be more of a grown-up."

When BBC World wanted to break into the American market, Silver helped create an out-of-home campaign based on capturing earned media. ""What is self evident now wasn’t necessarily obvious in 2008," he says. "So we had to convince the client that it didn’t matter if two people walked by their installations or 2,000." As long as media outlets talked about the work, it would do its job.

The media liked the visually interesting campaign about the news, and the work won multiple awards, including a Cannes Gold Lion, Best in Show at the Obie Awards and a Grand Prize at the London International Advertising Awards.

By the time Silver was running his own agency, he had grown tired of creating funny work. "Most of our time was spent experimenting with our social efforts," he says. This ingenious plug-in that automatically edited Twitter messages for a Ben & Jerry’s campaign was made and promoted for only $29,000, without any paid media. "It got incredible pickup from the first hour it was released."

The straightforward idea won a Webby Award, and it proved to Silver that the work only needs to be "smart and simple." No matter the medium, he says, "simple tends to win the day."

The idea that would become this popular, award-winning virtual reality activation was one of the first that Silver noticed after he joined McCann. "I grabbed this one and held onto it," he says. Still, it went through plenty of iterations. "Originally the idea was for a train. Then a bus.  Back to a train. Then, finally, a school bus. It took over a year to sell in."

Silver gives credit to the extensive team that worked on the campaign. "There are 23 people from McCann listed on the credits," he says, "and every single one of them is responsible for this one."

Unlike a lot of virtual reality work, which relies on flashy visuals, "Field Trip to Mars" was an "elegant solution" that "happened to be a great solve to a present problem," Silver says. "The best creative always emanates from a business problem."

My career in 5 executions: Jay Benjamin

My career in 5 executions: Vann Graves

My career in 5 executions: Chloe Gottlieb