Jason Gaboriau began his career in the mid ‘90s as an art director at Goldsmith/Jeffrey, working for clients like ESPN. After a stint at Lowe & Partners, he joined the creative hotbed of Cliff Freeman & Partners as an ACD, where he created award-winning work for Budget and Staples.

In 2003, along with fellow Freeman alums Douglas Cameron and Charles Rosen, Gaboriau founded Amalgamated. The agency flourished with clients like Ben & Jerry’s, Big Lots, Coca-Cola, Smartwater and Vitamin Water, and helped Svedka Vodka break into the US market.

In 2011, Gaboriau moved to Los Angeles to become ECD at Crispin Porter + Bogusky’s LA office, where his Grey Poupon work won two Cannes Lions. In 2015, he joined Doner LA as ECD, before being promoted to CCO in early 2017.

"I fundamentally believe that creativity has the power to create and change culture," Gaboriau says. "My job is to create an environment where people feel they can do their best work. Where they are encouraged to dream big. Where ideas are king."

Here are the 5 executions Gaboriau says have mattered the most to him and his career.

In it’s heyday, Cliff Freeman & Partners boasted some of the best rising talent in the industry. It "was like being in the Justice League of Advertising," Gaboriau says. "Everyone who worked there is now a who’s who of today’s great creative leaders."

Gaboriau worked with writer Steve Doppelt on this campaign, which won a Gold Lion at Cannes. It put the two of them on the map and "earned us the respect of peers who we were in awe of," Gaboriau says. "What I really loved was that it was voted the fifth most copied campaign ever. Imitation is the highest form of flattery." 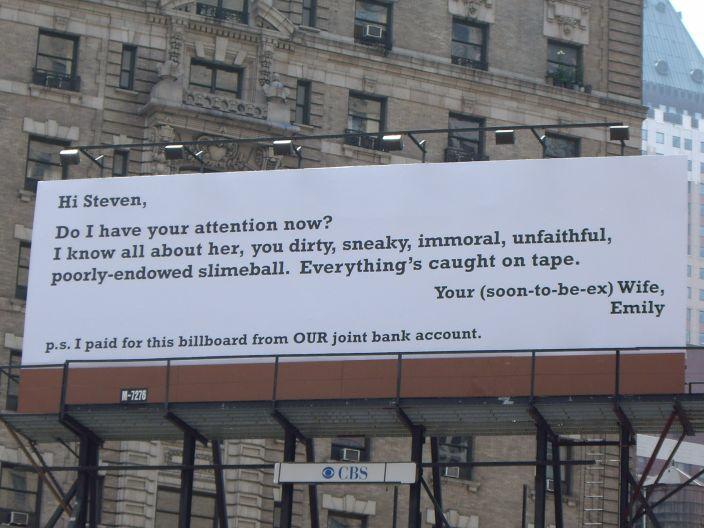 This integrated campaign began as a mysterious blog, written by "Emily," a New Jersey real estate agent. Emily soon learned that her husband had been cheating on her, thanks to the work of a private investigator. The campaign culminated with billboards in New York City, Chicago and Los Angeles. "What I loved most about this idea was how simple it was and how raw and real it felt," Gaboriau says. Viewers agreed, and the campaign even spawned its own Snopes debunking.

"It was that creative sweet spot, with everyone working together to create something that I knew in my gut was going to get tons of press," he says. "If only we could have used that creative genius to make the show better."

Once a sleepy little brewery in Fort Collins, Colorado, New Belgium is now the eighth largest brewery on the country. In 2008, it was just starting to gain recognition and wanted to increase its national profile. "It was loved by the locals but unknown in most of the country," Gaboriau says. "We realized that the appeal of New Belgium was more than just the beer, it was the lifestyle of living your passion, or ‘following your folly,’ as we coined it.

To make sure the video rang true, New Belgium showed it to the entire company before release, and a few local bike shops, too. "By the end of it, not only did we know that we had something special, but also that we didn’t suck at selling work."

Like many of us, Gaboriau watched too much TV as a kid. "I think I can recite every jingle ever written. I know that I am never fully clean unless I am ‘Zestfully clean,’" he says. So of course he was familiar with the original Grey Poupon commercial.

"I always thought it was odd the way it ended," he says. "The guy hands him a jar and then they pause the film for logo and super. Did he find it most enjoyable? Did it pair magnificently with his pork loin? We will never know." At least, not until Gaboriau had the opportunity to finish the story. A 30-second trailer for the full car chase ran during the Academy Awards, directing viewers to the 2-minute online spot.

Normally, Inauguration Day wouldn’t be the best time to announce the fifth season of a show set to debut in May. But 2017 was different.

The creative for this somber, quiet spot was done entirely in-house at Doner LA. "Netflix has always been about leveraging culture, not media," Gaboriau says. "It leans into marketing ideas that create their own distribution without needing a large budget to create a large impact. This idea did all of that."