From The One Club to beer with a purpose, Baldwin&'s founder David Baldwin connects brands with customers that share their values.

David Baldwin began his long career as a copywriter, working his way through a series of highly regarded agencies like Deutsch New York, Hal Riney & Partners and Cole & Weber. In 1994, he joined Leonard/Monahan in Providence as a creative director and partner.

Four years later, he took a break from Madison Avenue, joining McKinney in North Carolina (then McKinney & Silver) as an ECD, refreshing brands like Audi and Royal Caribbean. In his first year, the agency won business with Aetna/U.S. Healthcare, DiSaronno and Carrabba’s Italian Grill.

While at McKinney, he became the president of the One Club, and later its chairman, a position he held until 2009. That same year, he left McKinney to strike out on his own, founding Baldwin& in Raleigh, North Carolina in 2009.

After 32 years, Baldwin is still in advertising because he can help "brands we believe in connect with people through shared values."

Here are the 5 executions Baldwin says define his career. 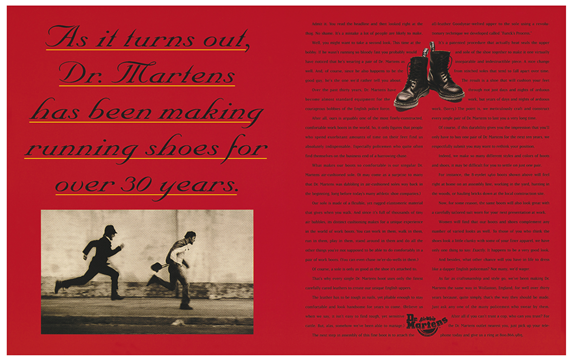 By the mid-‘90s, Baldwin had made a name for himself as a talented copywriter with experience at several well-known agencies. His latest position, Cole & Weber, had taken him to Portland—a pattern of bouncing from coast to coast he would continue for a few more years.

This tongue-in-cheek print spot played on the popularity of sports-focused show brands. "Even though it’s a long copy campaign, and even though the call to action is at the very end of the copy," Baldwin says, "the ads were generating over 50,000 phone calls a month" to London Underground, then the U.S. distributor for the brand. "This proves Howard Gossage’s assertion, once and for all, that people don’t read ads, they read things they’re interested in."

"I love the idea of a CEO so committed to his products that he challenged all of his competitors to a duel on their choice of vehicle," Baldwin says. That was the idea behind this ad campaign that took full advantage of the rise of new avenues for online interaction.

The team at McKinney had their client’s CEO call out his top rivals and invite them to a series of matches in Las Vegas. Viewers voted on the types of contests the executives would partake in, drumming up enough interest and support for the event that most of the other would-be contestants had to issue statements refusing to participate.

"It’s amazing to see it now in the era of Facebook and Twitter," Baldwin says, "because we didn’t have those tools to rely on yet."

In 2004, Baldwin was elected president of the One Club, then called The One Club for Art and Copy, and in 2006, he was promoted to Chairman of The One Club Board of Directors. Over the course of several years of Baldwin’s tenure, The One Club worked with director Doug Pray on a documentary featuring luminaries from the ad industry like Lee Clow, Phyllis Robinson, Hal Riney, Dan Wieden and Jeff Goodby.

Funding was provided by The One Club and Baldwin served as an executive producer for the film, which was screened at Sundance in 2009 and later ran on PBS, winning an Emmy in 2011. "Sometimes in advertising, you really get the opportunity to affect culture," Baldwin says. "This was our attempt to tell the true story of the people behind great advertising, probably the most prevalent art form of the 20th century."

The ubiquity of branded coupons dampens their effectiveness. So to keep viewers’ attention from wandering away from a new coupon for Krispy Kreme, Baldwin and his team focused on the best part of the doughnut—the glaze. "This work is everything I love about the way we approach problem solving, Baldwin says. "Instead of just creating a social-media post, it’s a video that’s a social media experience that’s a useful tool for customers that also just happens to be an ad."

While customers just needed to scan the YouTube video in-store to get another dozen doughnuts for free, the video was a mesmerizing three minutes of steadily dripping glaze. Viewers were so enamored that it ended up being the second most shared Instagram post worldwide in December of 2015.

In 2013, Baldwin co-founded Ponysaurus Brewing Co. in nearby Durham, North Carolina. After the state legislature passed HB2, the infamous "bathroom bill" that let business owners discriminate against transgender patrons, Baldwin leveraged both his businesses to help fight it.

"The brewery decided not to sit idly by and instead created a collaboration brew with Mystery Brewing and over 40 other North Carolina breweries to spread a message of inclusion and to raise money for LGBTQ causes and to fight back with love instead of hate," Baldwin says. The result was a new beer, Don’t Be Mean to People: A Golden Rule Saison, a high-alcohol pale ale "brewed with North Carolina grain, yeast and sorghum molasses."

Proceeds totaling more than $50,000 went directly to LGBT advocacy organizations, and the beer is still selling to this day.