From a Flash rock star to fake guitar, Big Spaceship's first CCO likes to rock the boat, and the vote.

On the way to his office at TribalDDB, Cedric Devitt used to pass by a quote on the wall from agency founder Bill Bernbach. "An idea can turn to dust or magic, depending on the talent that rubs against it." Even seven years after leaving DDB, Devitt says he still thinks about that quote. "It’s had a long-lasting influence on how I think great work gets produced today," he says.

After DDB, Devitt moved to LBi and then MRY, before becoming the first chief creative officer at Brooklyn-based Big Spaceship in 2015. In the meantime, he spent 14 years as the CFO of the U.S. Air Guitar Championships, even producing a cult documentary about the hobby.

"As our world becomes more and more complicated, with more need for specialization and disciplines," he says, "how you build a team is the most important thing you can do to arrive at the best work."

Here are the 5 executions Devitt says have meant the most to him and his career. 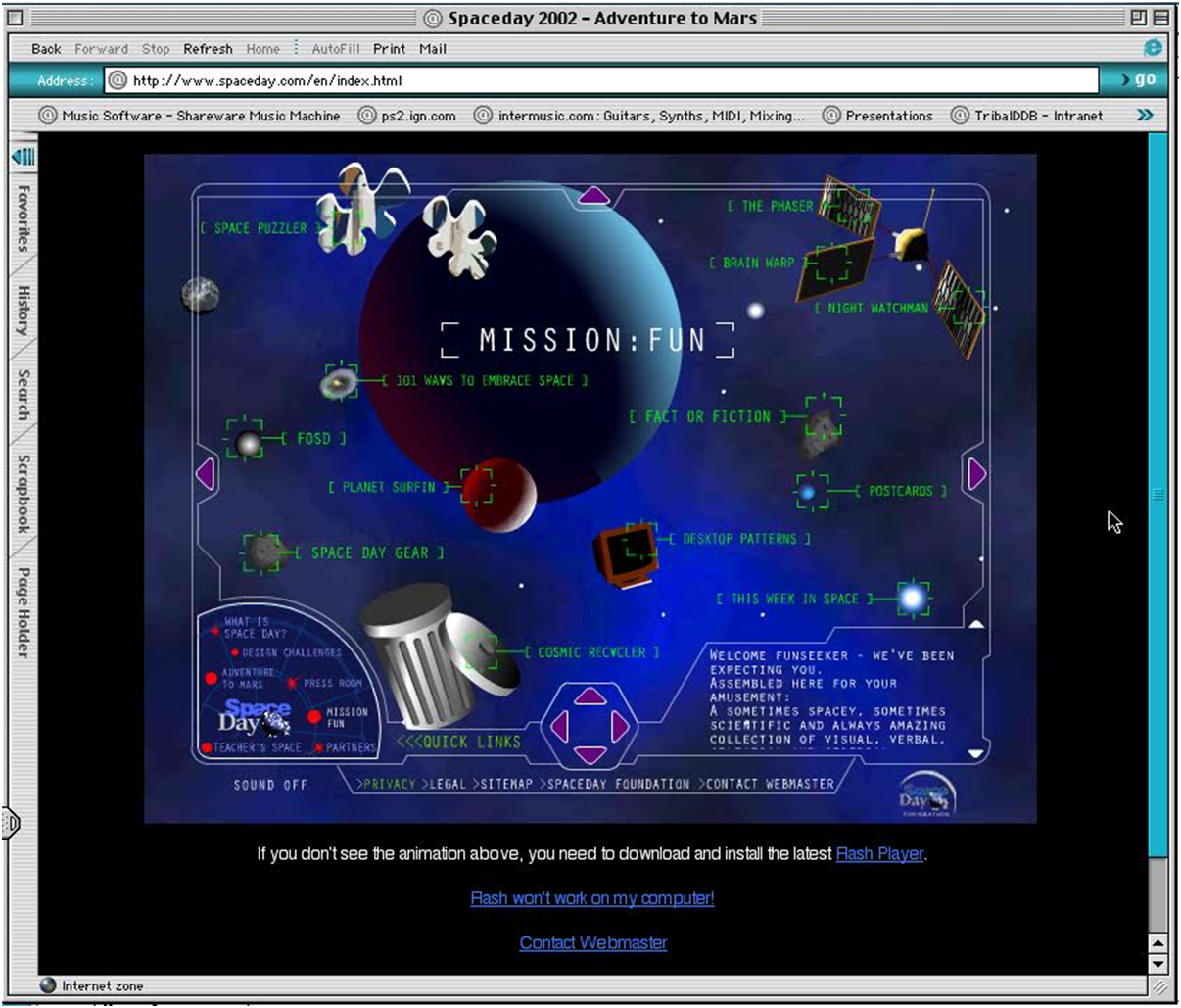 Early websites were static experiences, occasionally punctuated with dubious innovations like "frames." Then came Flash, which enabled sites to become interactive and responsive. The SpaceDay site allowed users to dive into the content, clicking through on a "z-axis" like they were moving through space, rather than just from one page to the next. "It was the first time I realized that you could tell very sophisticated stories through deep, engaging experiences and keep people’s attention beyond a 30-second TV spot," Devitt says.

"It was an amazing time, one that made rock stars of Flash developers," and for the rest of his time at TribalDDB, Devitt focused on creating immersive worlds for clients.

Devitt led the effort to create a platform that would allow 20 million Americans to nominate a presidential candidate online. "People were looking for change," he says. "The idea that you didn’t leave it up to the parties to pick who is president was interesting." It also meshed with Devitt’s own interests. A native of Ireland, he wasn’t a U.S. citizen at the time and couldn’t vote, but the American system baffled him (and still does). "It’s beyond me that we still cannot vote online. If we are really interested in ensuring everyone has a voice, then online voting has to be worth revisiting."

But while the site came together, the campaign didn’t. "It failed because not enough people were willing to endure the scrutiny of running for president," Devitt says. "By July of 2012, we couldn’t find a candidate that would meet the requirements of the bylaws."

The failure was still useful, though. "It was the first full-on start up experience that I was involved in where we had to build something very ambitious from scratch with a small team," he says. "This campaign feels relevant not for its success but more for the foreshadowing of things to come. It was perhaps just one election cycle ahead of its time."

MRY was tasked with creating an Olympics campaign for Coca-Cola, one that would be relevant and applicable globally. "Often Coca-Cola delivers an idea on the bed of music, which translates across many countries and all languages," Devitt says.

But coming up with the creative was the easy part. "It was a major lesson in sabotage control. Coca-Cola is a massive organization where everybody wanted to leave their mark on the campaign," Devitt says. He recalls one of the people on the client team telling him "Your job is not just to bring me great ideas but to shepherd them through the organization while maintaining their integrity," a realization he took to heart.

"It’s solid advice that I try to remember every day."

ATT It Can Wait #X from Leo Leone on Vimeo.

This wasn’t the first entry in AT&T’s "It Can Wait" campaign, but it was one of the most effective, says Devitt. He approached the task of getting teenagers to put their phones away like he was trying to break an addiction. "For them, missing out on being a part of the conversation would always outweigh the fear of dying," he says.

That insight led to the #X campaign. "To break this addictive behavior, we gave them something simple to ease the social pressure to respond," Devitt says. The text shorthand, which let teens pause the conversation while they were driving, worked.

"Once the campaign was out there and on-air, it did manifest itself as fewer traffic accidents on the road," he says, and it won the client and agency several corporate social responsibility awards.

Four years after the ill-fated AmericansElect campaign, Devitt, now leading creative at a different agency, dove into politics again. "There was more realism on my part about how tough it is to get people to vote and get out there and make a difference," he says. "Research told us that apathy was still a huge barrier and millennials were the least likely demographic to vote in real life."

Devitt got the opposite response at Big Spaceship. "Anytime an agency gets an opportunity to something like this, everybody wants to be a part of it," he says. It probably helped that the campaign involved YouTube celebrities, as well as President Obama.

"It was really easy to motivate people in the agency to work on this," Devitt says, "certainly more so than working on a cleansing product."