From herding cats to 9/11, this Fallon graduate craves the assignments that scare him

Greg Hahn spent nearly a decade at Fallon Worldwide in Minneapolis working with clients like CitiBank, Subway and Miller. It was there that he forged his long-standing relationship with David Lubars, now chairman and chief creative officer at BBDO Worldwide. In 2005, Hahn moved to New York to join Lubars at the Omnicom Group agency. Today, he is CCO of the agency’s New York office.

"My philosophy in one word is ‘yes,’" Hahn says. "Say ‘yes’ a lot and take on the things that scare you." Taking assignments that no one wants and staying optimistic about them keeps possibilities open. "Don’t be your own worst client."

Here are the 5 executions Hahn says have meant the most to him and his career.

This was the first big campaign Hahn worked on after joining Fallon (then Fallon McElligott). "The assignment was to make Lee Jeans cool among high school kids," he says. What better way to do that than to resurrect a 50-year-old doll?

Spike Jonze – then still known mostly for music videos – directed the 6-minute mockumentary that kicked off the campaign. "This was a couple of years before broadband and YouTube, so the only way we could get people to see the film was to run it on TV," Hahn says. Comedy Central ran it, advertising it as an actual film. "It was the early days of content before it became ‘Content.’" 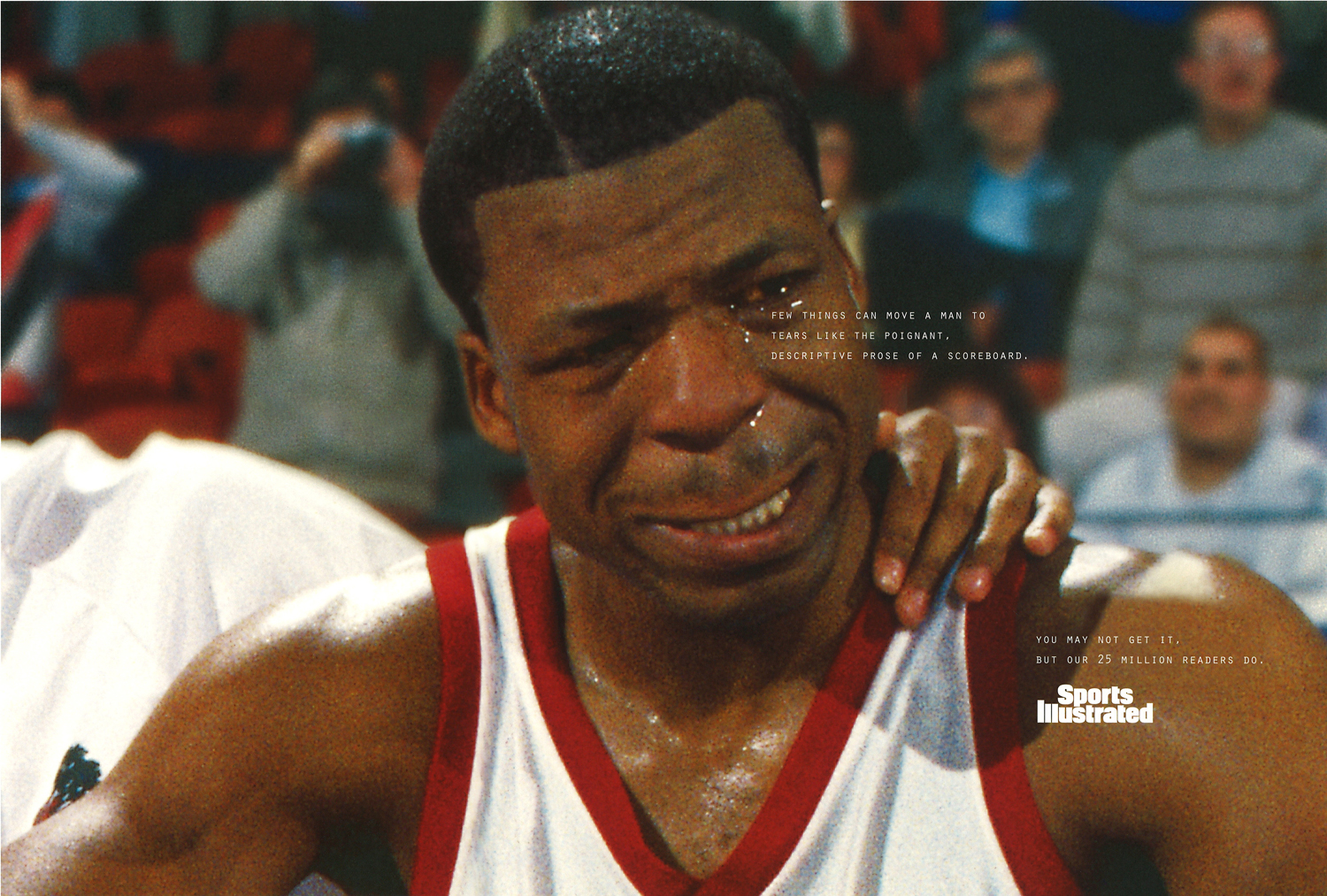 Hahn admits he knows nothing about sports. But shortly after Lubars joined Fallon McElligot, he asked Hahn to work on this print campaign for Sports Illustrated. "He teamed me with Art Director Steve Driggs, whom I had never worked with before, and told us, ‘It needs to be great, and it needs to be presented tomorrow,’" Hahn recalls.

His first assignment from Lubars, it felt like a test. "He was new and evaluating the creative department," Hahn says. "It was a bit of a trial by many fires."

It turned out that Hahn and Driggs worked well together, and they produced about 30 of these print executions over several years. Not only did it force him to work outside his comfort zone, "it saved my job."

A Super Bowl spot is "when the world gets to grade your paper," Hahn says. When the CEO of EDS wanted a Super Bowl commercial that would crack the USA Today Admeter’s Top 10, Hahn had to figure out a way for this relatively unknown B-to-B company to stand out next to household names. The result was this Emmy-nominated spot that presaged the coming ubiquity of cat memes.

"As a writer, metaphor felt like a good way to approach this," Hahn says. "I know very little about what EDS actually does, but I know a lot about cats." 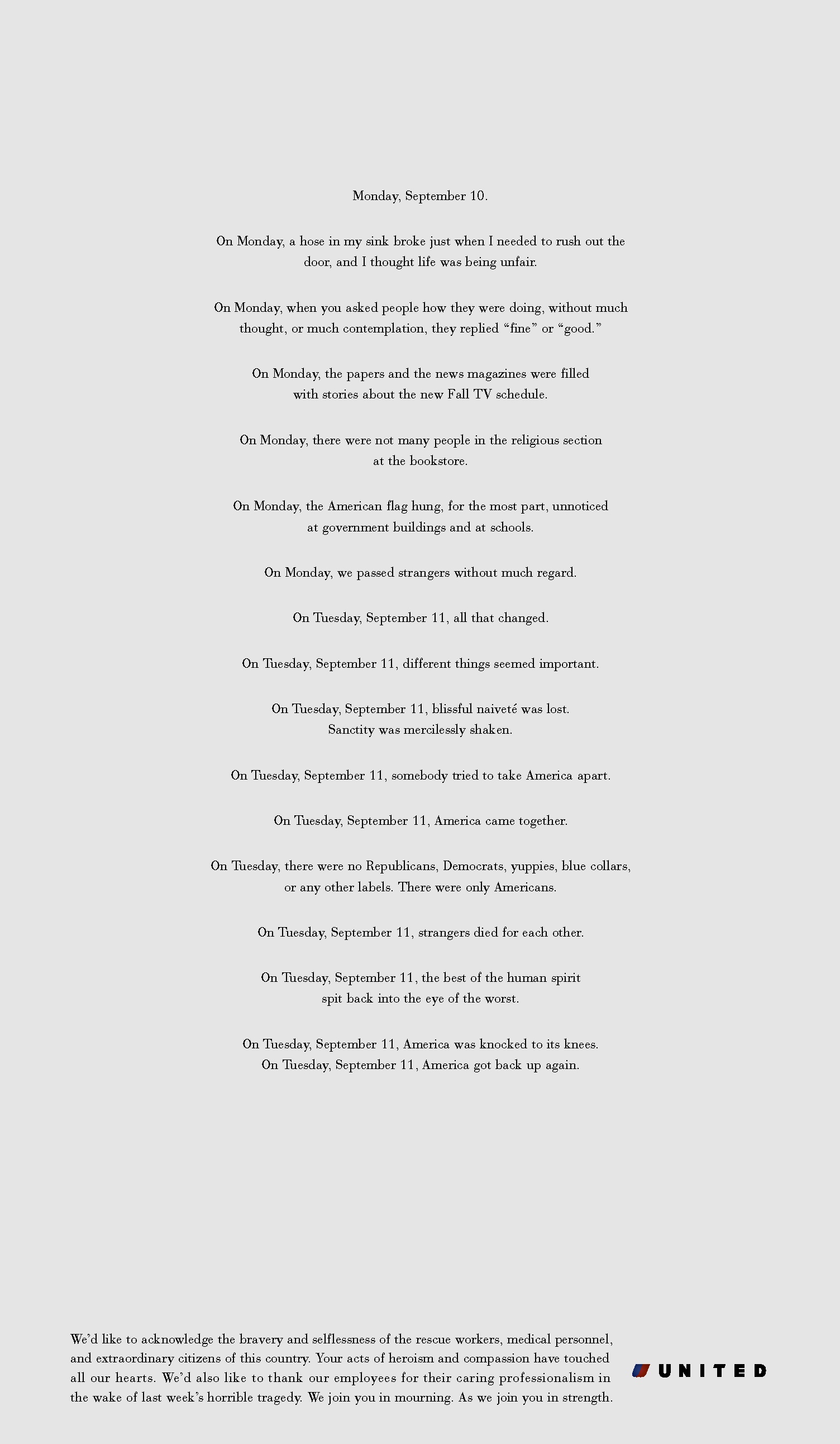 This full-page print ad, which appeared in the Wall Street Journal and the New York Times, was United Airlines’ first public response to the September 11 attacks. Initially, Hahn was tasked with rewriting a letter from the airlines’ CEO. "I did that, but something about it didn’t feel right. It felt very official," he says. So he wrote this, too.

"It’s definitely the most personal piece of advertising I’ve produced," he says, "just thoughts that were swirling around my head as I tried to process the times."

"The Sopranos" had just ended its acclaimed eight-year run, and digital networks were ramping up the quality of their offerings, so HBO was looking to reassert itself as a destination for storytelling.

"We quickly decided you couldn’t say you’re a great storyteller," Hahn says. "You have to show it." Rather than trying to create a video or film that would compete with the client, Hahn decided to try a different medium entirely.

"We learned a lot just by jumping in first and figuring out how we’re going to land after," he says. The activation ended up winning the Grand Prix in two categories at Cannes, as well as five Golds, a Silver and a Bronze.