"This past weekend I went to New Hampshire and went canvassing. I went door to door to get out the vote for my favorite candidate. I never did anything like this before."

My Mom and Dad have always volunteered to work the polls. They drive people to vote and check them in; they’ve done it for years. My Mom is 83 and my Dad is 88, and they’re real powers of example. As usual, they plan to help people vote during the upcoming New York primary and the Presidential election.

They’ve also made sure community shelters are set up when the power goes out or it gets too hot, they regularly visit sick older people in hospitals, and they’ve marched at many demonstrations and even blocked traffic, mostly for Israeli causes. They’re the kind of people who help make our communities communities. All I’ve done is written checks and bought benefit tickets. Don’t get me wrong, fundraising is important, but it’s different than what my parents do.

This year, I wanted to get more involved. I started going to political fundraisers (remember, I like writing checks) and even got my picture taken with Mayor Pete Buttigieg. This past weekend I went to New Hampshire and went canvassing. I went door to door to get out the vote for my favorite candidate. I never did anything like this before.

A group I met at a fundraiser rented a bus and went to New Hampshire. We got there in time to see the debate. I never really went to a watch party but I can imagine this was like one of those get-togethers. While I appreciated all the commentary and enthusiasm, I tend to reach my limit quickly on too many emphatic discussions. A lot of the people I traveled with are motivated by a lot of things and aware of many of the issues, more so than me. 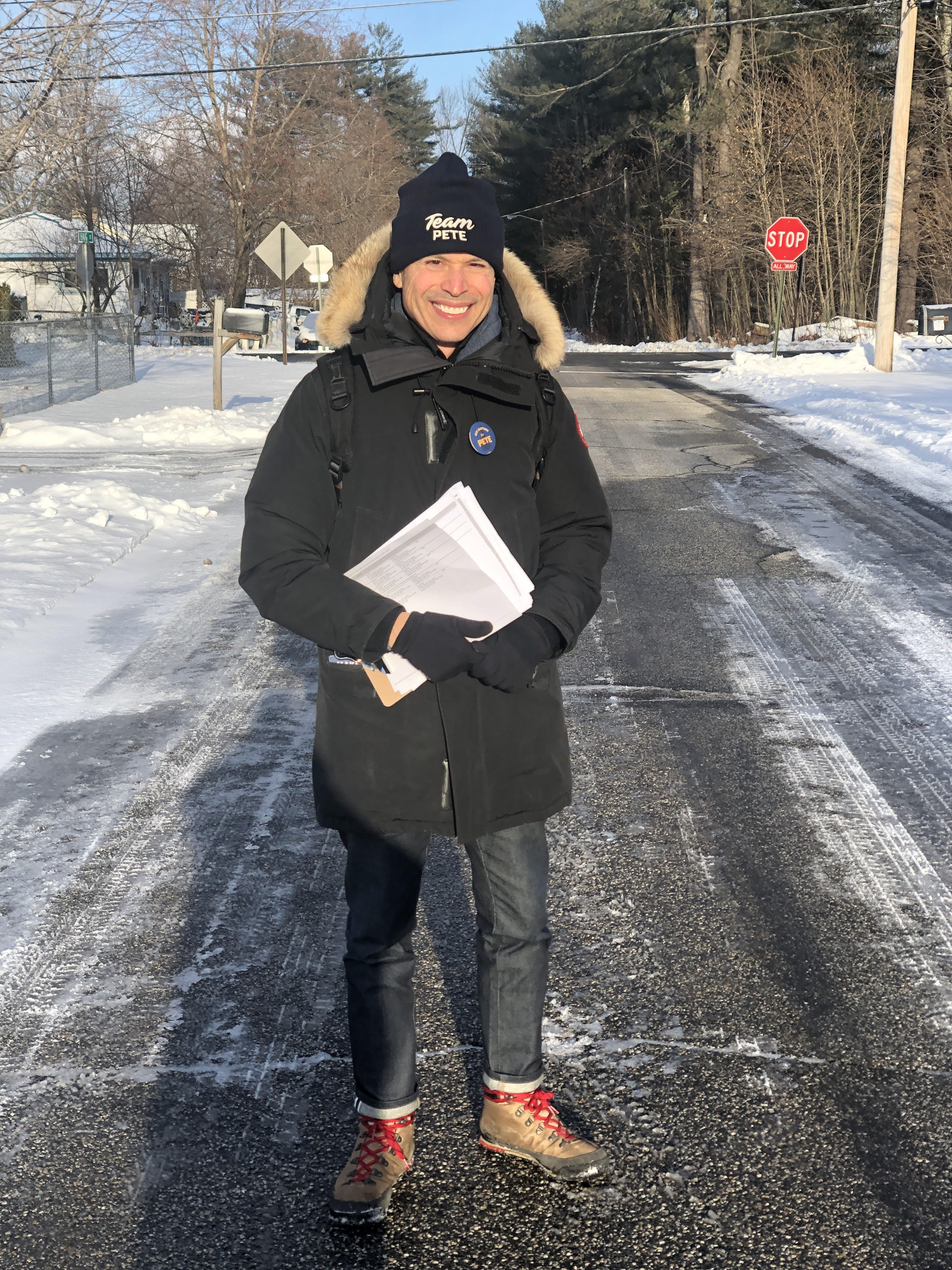 What motivated me to join the trip was a genuine deep, deep feeling of hope about the future that I haven’t felt in many years. I worry about the weather and national debt and the strength of our democracy; most of all, I worry about all the hate I see around me, which I really don’t understand. I don’t know why people hate so much. When I started to feel hope again, I didn’t want to let that feeling go.

So after listening to my fellow canvassers comment on the debate, I went to bed. We woke early and went to Concord NH to get a list of doors to knock on. The list was comprised of Democrats, which made me feel less anxious to knock because I didn’t want to get into policy arguments that I probably couldn’t manage. We met people supporting all the different candidates and also people who voted for President Trump.

Everyone we met seemed really proud of their voting responsibility in New Hampshire, the nation’s first primary. Most of them thanked us for canvassing. I think the person that touched me the most was the older woman who said she was either voting for Amy or Pete because she liked their character. I understood what she meant because character matters to me too. I asked her if she wanted any literature and I told her I was glad she was voting on Tuesday.

We probably knocked on 100 doors. I never met so many people who were so eager to vote.  Typically I don’t talk about politics to people, especially people I don’t know, so talking to all these people was new for me.

Everyone I spoke to was so proud to be American and just wanted a better democracy, and that gave me even more hope. It was true regardless of who they voted for and who they wanted to win. I hope I don't forget that feeling.

After we got done canvassing, we went to the democratic dinner in Manchester where all the candidates spoke. They were all great. We were sitting right up close so I got to see everyone.  It was amazing to watch the performances, especially the candidates that didn’t use notes.

The second day we also canvassed, but this time the campaign sent us to Manchester. We knocked on as many doors but we got more "not home" — a combination of people not being home or just not wanting to answer the door. There were lots of Warren, Yang, and Bernie stickers on the front doors.

This is not meant to be an endorsement of any party or a particular candidate. Instead, it’s about a new experience that made me feel excited and hopeful. I think that everyone should take the opportunity to knock on doors on behalf of any candidate they support, and any party. It was an amazing experience to talk to so many strangers in cities I’ve never been to about a very special privilege that we all have, and that’s our ability to vote.

Barry Lowenthal is the CEO of The Media Kitchen.

The business you love: How Me Too and Time's Up reshaped my future

Aruba campaign reminds you why winter is the worst

Meet the company making a difference with voters

Black Twitter: How to embrace culture and avoid pitfalls