How the tricolor confection came to rule Halloween without much promotion

Some products just sell themselves. Each year, candy makers produce 35 million pounds of candy corn, but the little bags of striped sugar drops never get advertised. Or at least, that’s the popular myth.

In honor of National Candy Corn day tomorrow, we decided to do a little investigating.

The "no ads" rumor probably began in 2004, with a bit by stand-up comedian and cranky pundit Lewis Black (NSFW language, obviously). "The worst thing about Halloween is, of course, candy corn," he rants. "Candy corn is the only candy in the history of America that’s never been advertised."

Listen to the full audio clip, and it’s obvious that Black isn’t being totally serious. But the claim is demonstrably false. Here’s a candy corn-loving chicken from the 1950s. And here’s a 2011 Brach’s candy corn ad by Blue Chip Marketing Worldwide, an agency focused on consumer packaged goods.

Still, there’s a kernel of truth in the joke. Candy corn ads are a lot harder to find these days than pitches for other candies.

According to the lore, a Philadelphia candy maker named George Renninger created candy corn in the 1880s, part of a trend of modeling sweets after familiar farm staples like pumpkins and turnips. At the time, corn was mainly used as animal feed, since sweeter varieties weren’t developed until after World War II. So candy corn isn’t supposed to taste anything like corn, in the same way that a chocolate snowman isn’t meant to taste like dirty ice.

For decades, many small shops made their own varieties and advertised them like any other candy. It was even marketed as a summertime treat, like in this ad from Life Magazine in 1957. 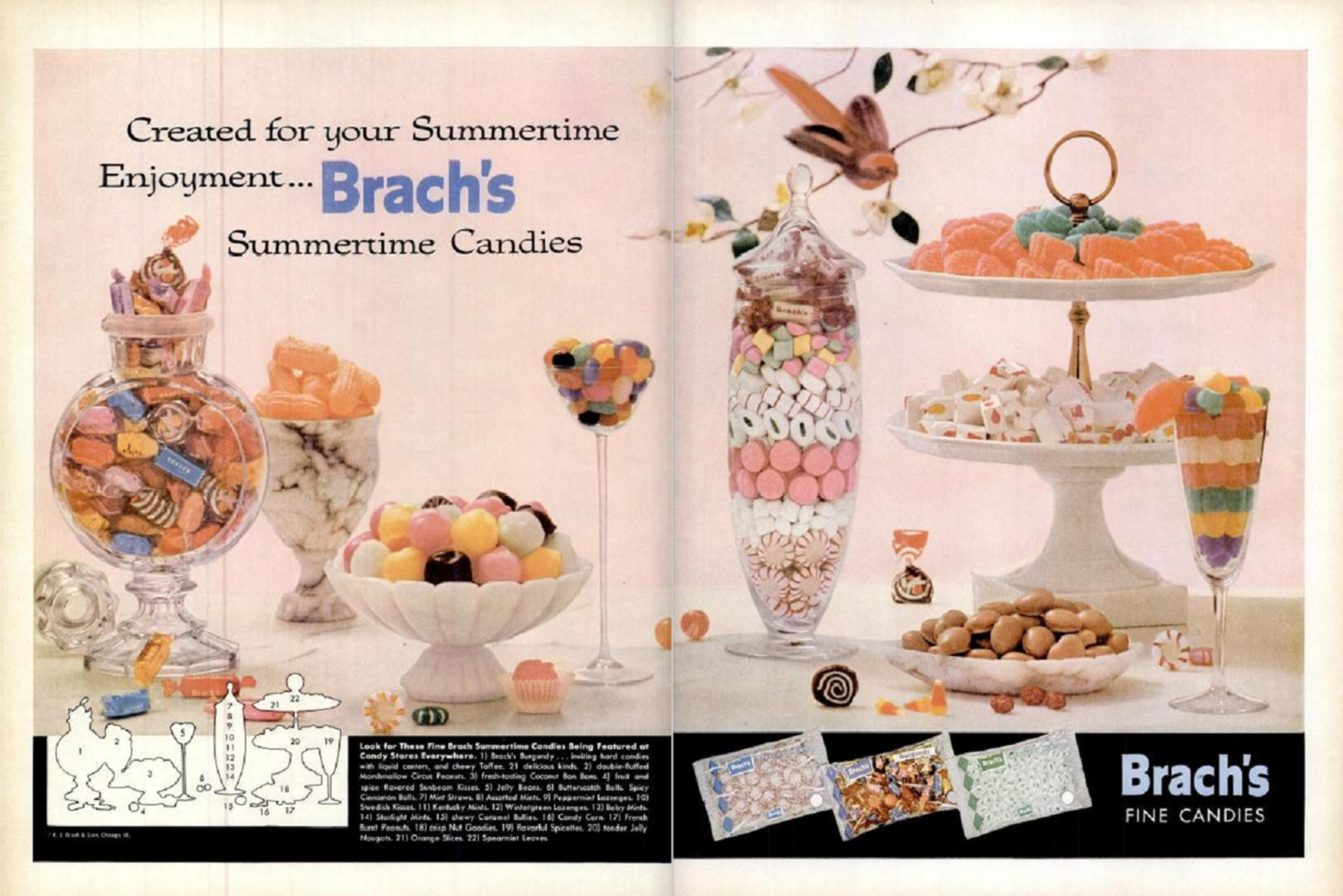 But the exploding popularity of Halloween in the post-World War II era sealed its fate. The move to an industrial society spawned nostalgia for reminders of America’s agrarian roots, like corn. And its traditional shades happened to match the ubiquitous color scheme of the candy-soaked holiday. The confection was swept along in the craze and became a standard-bearing holiday icon, like bunnies and Easter. People argue over the best way to eat it (some Philistines eat it whole). And like Christmas fruitcake, people buy it even if they don’t eat it.

In 2014, Brach’s unveiled a redesigned website from agency Periscope that showcases all its candy products, but candy corn takes a starring role. The message is clear: Brach’s is candy corn. 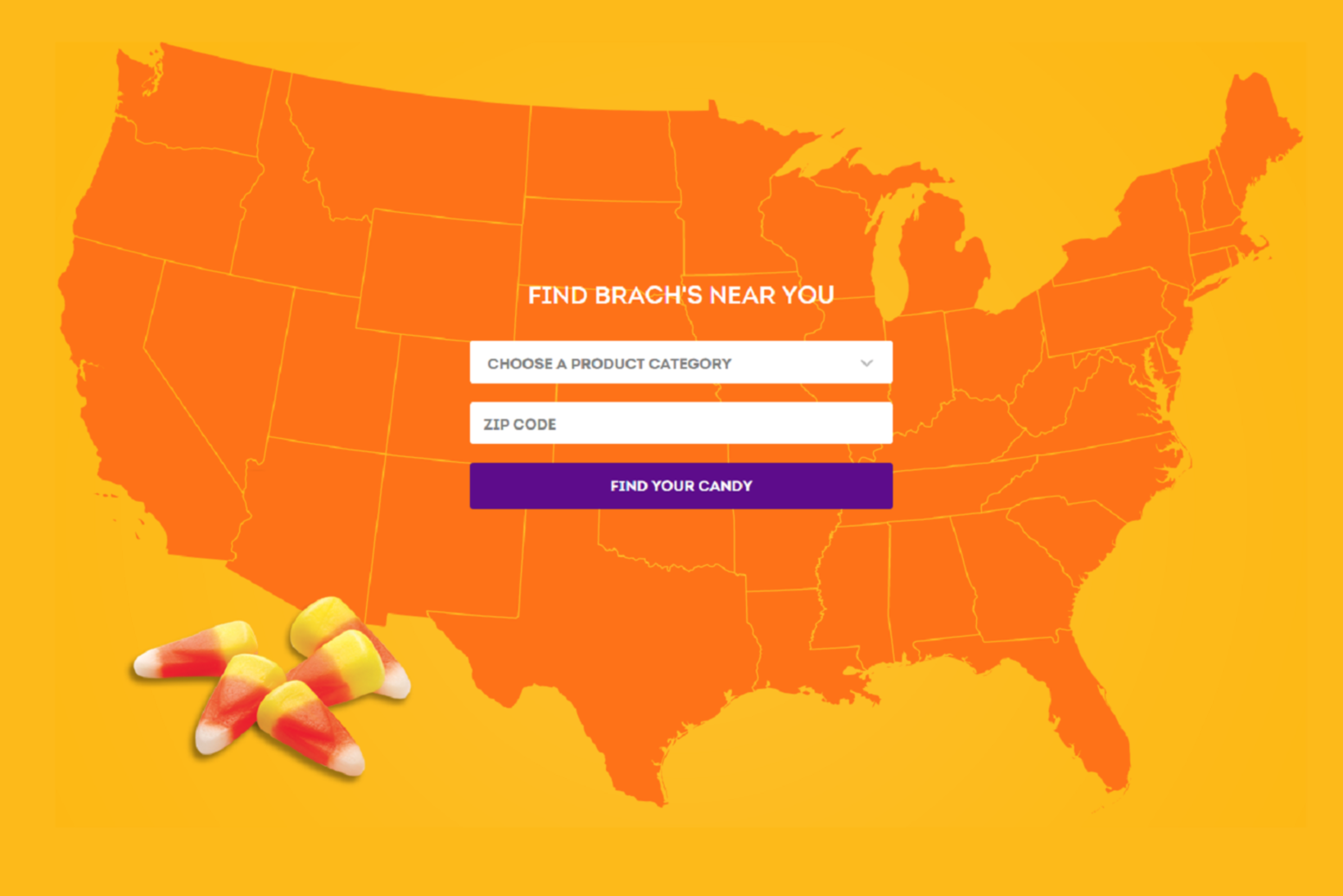 Candy corn cross-promotions with more recognizable brand names are common, from M&Ms to Hershey’s Kisses and kids’ cereal. And they are also benefitting from the cultural phenomenon; DIY candy corn recipes, Pinterest pages solely devoted to the product, and bloggers who scramble to review new flavors. Even people who hate candy corn talk about it.

So anyone who still thinks there aren’t any candy corn ads just isn’t paying attention. Consumers, not the brands, are the ones doing most of the selling:

Play: It's not just for toys anymore

The 13 most-shared scary ads of all time

Eight commercials that are accidentally horrifying

Comic Con: The new measure of success for TV