Agency Amplify devised a campaign for drinks brand Innocent to brighten up the days of Londoners through a series of random acts of kindness. The Chains of Good campaign featured free smoothies, bike servicing and bespoke magazines to highlight how the brand's actions are all about doing good for the world.

Aligning with Innocent’s 2014 'Tastes Good Does Good' above the line strategy, agency Amplify was briefed to execute a series of 'Chains of Good' events in London. A first for Innocent, the campaign linked together TV, poster, experiential and sampling.

Through pouring rain and London Underground strikes, Amplify worked with Innocent to brighten up Londoners mornings. Alongside the brand's 'Tastes Good, Does Good' TV and poster campaign, Amplify kick-started over 50,000 separate chains of good in London, surprising commuters with smoothies, compliments and good deeds, and then encouraged them to pass it on creating a chain a good, which was recognised on social media under the hashtag #chainofgood. 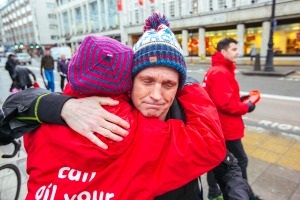 Forty thousand 'gifting' smoothies were placed in the hands of London commuters, encouraging each person to take one, personalise it and pass one on to a friend who needs or deserves a bit of goodness.

Read me and pass me on magazines were handed out for free during the early morning rush, along with bike seat covers to keep cyclists bums dry. Innocent’s bike-servicing crew were on-hand to pump up people's tyres and oil their chains, and Mayor of London Boris Johnson stopped by to have his bike serviced during the tube strike misery.

All consumer touchpoints directed people to an online compliment generator, which enabled bespoke compliments to be sent out on social media, to continue the chain of good. 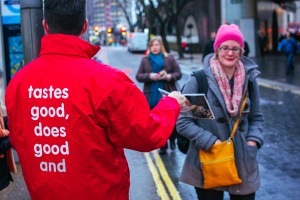 Commenting on the activity, Jamie Sterry, brand activation manager at Innocent Drinks, said: "The integrated approach allowed the experiential activation to focus on delivering depth of engagement to the campaign, landing the brand ideal of tasting good and doing good."

Do you have a brand campaign, which we could feature online as part of our Campaign channel? Email news editor Samantha Edwards to get involved.