Wunderman jazzes up its traps; Aldi print ad in 'homage'; and do you think you work for the fittest agency in town? Find out and maybe win a trip Rwanda.

Quite what goes on in some agency toilets after hours is the subject of much conjecture, but at least Wunderman has provided its staff with an environment in which to be able to truly party. The shower rooms have been revamped to include disco balls and neon signs and launched with an in-shower DJ. Whether this goes any way to dispel old and unhelpful stereotypes of advertising Diary isn’t sure, but at least going to the traps in Wunderman’s new "Studio 54" set-up has got a little bit more interesting.

Has Aldi (or its social agency Shiny Red) been trawling old Twitter feeds to find inspiration for some of its latest print ads? Or is it hoping that people have short memories?

Either way, one Aldi print ad, using Bon Jovi wordplay to promote its lemons and pears, bears a remarkable similarity to a string of posts by the prodigious social media comedian and writer Periwinkle Jones (@peachesanscream) from a couple of years back. Her thread started with the line "Wo-oah, we’re halfway there, whoah…." followed by a picture of a lizard on a chair. Amazingly one contributor Jim Sullivan (@BettysDad) even came up with this exact same execution.

Mens sana in corpore sana. And you can’t say fairer than that. To prove just how healthy you lot are, one implementation company – Freedman International – is attempting to discover the fittest London-based media and creative agency, with the prize of a trip to northern Rwanda where they can, errr, also help build a classroom for rural primary schools in association with ActionAid. The tournament kicks off on 1 June and every participant will receive a Fitbit tracker. Both agency and individual performance will be monitored in real time and posted on an active online leaderboard. For more details visit witnessthefitness.live.

Labour MP Chuka Umunna has been regarded as potential party leadership material but pulled out of the race in 2015 because of questions about his personal life. Speaking on-stage at the PPA Festival in Tobacco Dock, he explained he drew the line when his future father-in-law, whom he had never met at that point, was besieged by paparazzi. Umunna didn't entirely rule out a future leadership bid, although he does seem to have a knack of fuelling speculation about his past. "There will always be this, 'did I do loads of line of coke when I was a student or have all these different lovers of different sexuality?" he told the PPA crowd. If you say so, Chuka!

ITV chairman Sir Peter Bazalgette and new chief executive Dame Carolyn McCall didn't face hard questions at the annual shareholder meeting, which was mainly attended by small shareholders who asked about such pressing issues as football and sewage. One investor noted Bazalgette's family history keeping London clean – ancestor Joseph Bazalagette set up the capital's sewage system in the 1800s – and hoped he would uphold those standards at the broadcaster. Baz replied grandly: "I'm not intimately involved in sewage provision."

Everything must go: this is your chance to secure a bit of advertising history as Droga5 packs up its Victoria home and moves to east London. Fancy a signed photo of Chesney Hawkes or stockpiles of Rustlers microwaveable burgers? What about weird Sri Lankan voodoo dolls or a turquoise couch once defecated on by Sol Campbell’s cat? All these treasures will be up for grabs at Droga5 London’s yard sale on 30 May, and a percentage of proceeds will be donated to BAD, an initiative to connect the ad industry to young talent. Chief creative officer David Kolbusz said of the event: "As a lifelong hoarder, this yard sale goes against my every instinct, but as a lifelong shopping addict, I wouldn’t miss it for the world. I will be first in line to buy back my Saint Laurent shoes that I’ve never worn." RSVP at d5ale@droga5.co.uk 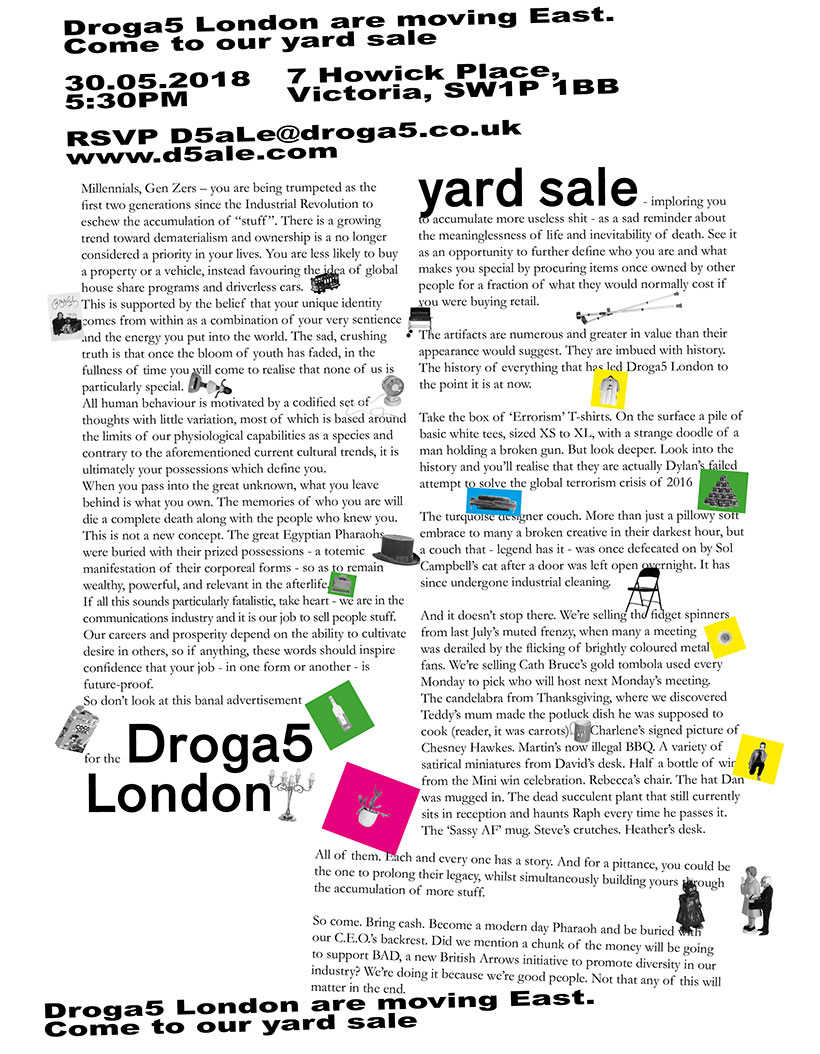