Burger King's US 'Scary Places' campaign is insensitive and vulgar at a time when many restaurants are struggling to survive.

In its new US Halloween campaign, Burger King has taken aim once again and fired a shot at its rivals in what has become an annual tradition, à la John Lewis' Christmas campaign in the UK. Only this time, its sights were misaligned and it will likely backfire. As it should.

The ‘Scary Places’ campaign is being rolled out across selected US towns and cities; users of the Burger King app will receive a push notification when they are close to one of its ‘scariest locations’. In return, customers will be entitled to a free Whopper.

All of which sounds like a good promotional campaign and worth the drive, yes?

Err no – not when one considers that said ‘scary’ locations are in fact shuttered McDonald’s and Wendy’s restaurants that have gone to the wall – some in recent months, others before the coronavirus pandemic.

Rather than come out in support of its beleaguered colleagues whose livelihoods have been claimed, the world’s second-largest fast-food chain is p**sing all over them in an act of vulgarity, insensitivity and gobshitedness. 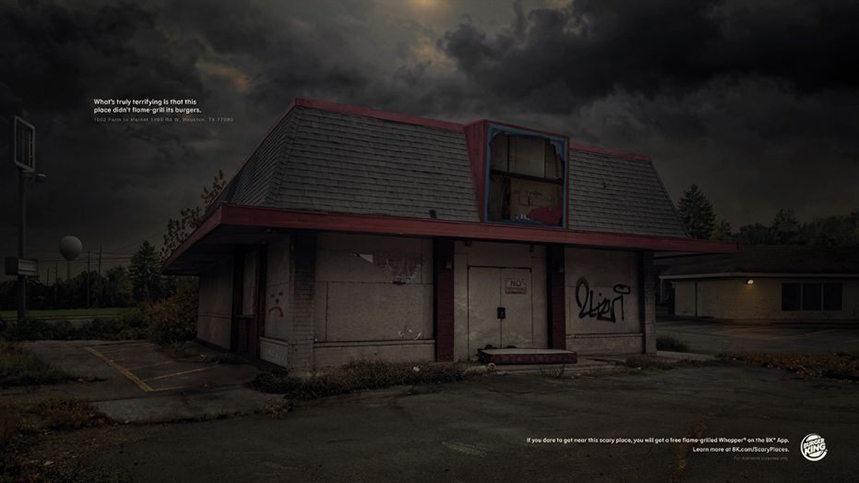 At any other time over the past few years, Burger King might have been forgiven for running such a campaign. But not now, not with all we have gone through and are still experiencing. The hospitality and retail sectors are on their knees, infection rates are rising once again, and jobs are being lost at a rate of knots.

Taken in isolation, to exploit any one of these factors would be insensitive, but to take the collective and ram it down people’s throats is wrong and unforgiveable.

Consumers have turned away from the mindless fare propagated by social media influencers in their droves because they showed just how disconnected they were from the realities of the here and now. Some will reinvent themselves to prove their value, but others will, and already have, disappeared into the ether. Brands such as Burger King should take note and heed the warnings.

Until now, this campaign has received little, if any, negative media commentary. Maybe that's because many have long admired previous Burger King Hallowe’en promotions; or perhaps its playful spat with McDonald's over the years has earned their silence.

These campaigns have always provided a brilliant mix of entertainment and cheekiness – tinged with the hope that Burger King’s arch-rival would surprise us with an equally engaging counter-campaign. But it never does. Instead, McDonald’s refuses to rise to the challenge and rather boringly opts to remain hunkered down under the safety of its golden arches.

Such campaigns build brand affinity, and observers might be tempted to overlook Burger King’s recent faux pas because all previous campaigns have been so compelling. But we cannot overlook the fact that Burger King has demonstrated ignorance as to what ‘context PR’ is. It didn’t ‘think’ about how its messaging could be interpreted, and for that Burger King has been extremely naïve. This is basic stuff – chapter one of the 'How to Run a Successful PR Campaign' handbook.

Poking fun at competitors is harmless in the main, but when it graduates from treading to stampeding over local sensitivities, it crosses a line. It will be interesting to gauge the reaction within each of the local communities involved. Will there be a buzz or backlash, especially if the jobs lost at these ‘scary places’ have not been replaced?

Burger King has failed to read the room. It has shown itself to be occupying a very different echo chamber to the rest of us. The Burger King brand is unlikely to suffer too much damage, but this campaign should serve as a stark reminder to all brands that if they fail to contextualise their PR, they risk losing the trust and respect of those who matter most.