For the first time, consumers will be able to purchase its autumn-winter collection directly through a campaign gallery and short films on Burberry.com.

The news follows the launch of the brand's 'Runway to Reality' strategy, which allows VIP consumers to buy items from its runway collections immediately, via an iPad app.

The campaign, which will go live across all platforms on 1 June, will also focus on Burberry's British heritage, in an effort to capitalise on the Queen’s Diamond Jubilee celebrations and the build-up to the London 2012 Olympics.

Shot in Greenwich, London, at the site of the Games’ equestrian competition, Burberry claims it is the brand’s biggest ad production yet.

The ads will star British actress Gabriella Wilde and British musician Roo Paines, who has written an exclusive track 'Indigo Home' for the campaign.

Christopher Bailey, chief creative officer at Burberry, said that the campaign "celebrates our brand and London through imagery, film, music, weather and our iconic outerwear in a very British way". 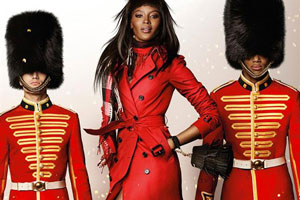 In danger of being consigned to history a decade ago, Burberry has undergone a creative and digital revolution under the direction of chief creative officer Christopher Bailey, who joined the company in 2001.

He believes the company is now "as much a media-content company as a design company". Recent digital innovations have included: