Booze sales are rising in the run-up to Christmas, data shows, as inflation in grocery prices hits its highest level since 2013.

Fraser McKevitt, head of retail and consumer insight at the data company, said that while volume sales had increased, the growth was mostly down to consumers choosing more expensive drinks. Gin, whisky and sparkling wine saw sales grow 26%, 10% and 7% in the period.

But an increased interest in moderation can also be seen in the data, McKevitt added: "Still small but growing rapidly, non-alcoholic beer is the new kid on the block this Christmas – growing sales by 27% during the past 12 weeks."

Budweiser became the latest major beer brand to launch a non-alcoholic variant last month, with the historically-themed Prohibition. Heineken has also entered the market in the past year.

Fighting over a smaller pie

Across the grocery sector, sales grew 3.1% – but with inflation at 3.6%, it means supermarkets are declining in real terms. Overall sales were buoyed by the discounters, Aldi and Lidl, which saw growth of 15.1% and 14.5% respectively.

There was little to choose between the big four supermarkets, meanwhile, each of which recorded sales growth above 1%, but below the market average of 3.1%.

The strongest performer was Tesco (+2.5%), with Asda (+1.2%) still in last place, but having closed the gap. The big four – also including Sainsbury’s and Morrisons – saw their combined market share fall 0.8 points year-on-year to 70.1%.

"Unusually, the four of them are on quite reasonable form, if you assume that Asda is getting its mojo back," Mason said. "When you look at where there’s been winners and losers in the big four, it’s usually been because one or two have been off their game, as much as because the others have been on it." 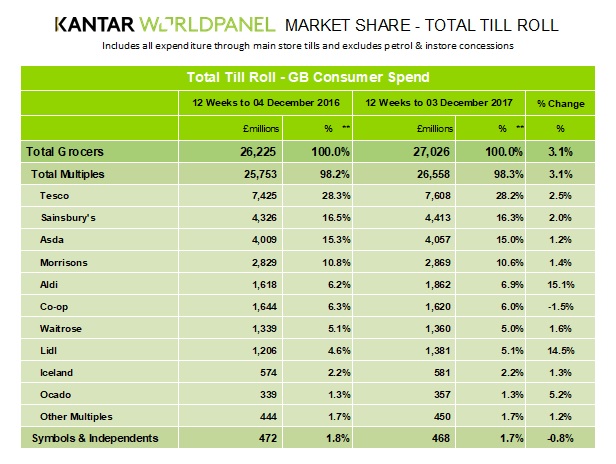 Sainsbury's is in danger of spreading itself too thin

Why retailers must smarten up