In other news: Cannes-worthy APAC ads ... Blocking Kardashians ... 7Up in Beirut ... Daily Mail hooks up with Snapchat.

Heineken evokes Prohibition with Blind Pig. (Marketing) The Dutch brewer has launched a new cider brand blended with spirits aimed at young digital natives who "don't follow the crowd." Blind Pig is inspired by the underground drinking scene of the 1920s. Unlike Heineken's other portfolio of brands, including giants Kronenbourg and Bulmers, it has been seeded in just 27 bars. By the summer distribution will reach 3,000. But there won't be any above the line, big bucks marketing spend from the world's third largest brewer. Heineken marketing director Jacco van der Linden wants people to "discover" it.

Snickers uses stickers in flub-themed campaign. (Marketing) Snickers has rolled out a campaign using stickers reminding passers-by that mistakes happen when people are hungry. The campaign, by BBDO New York, saw stickers with the tagline "you're make mistakes when you're hungry" plastered next to mistakes around the city. 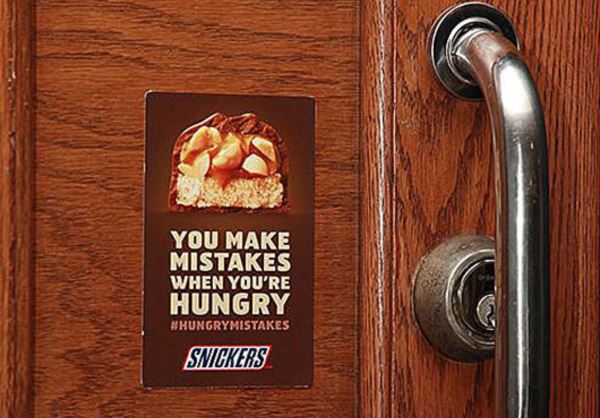 Tham Khai Meng forecasts APAC work at Cannes. (Campaign Asia-Pacific) The worldwide chief creative officer for Ogilvy & Mather shares his predictions for APAC work likely to be lauded at this year's festival, including creative for Ikea, MetLife and Suntory whisky.

7Up hits Beirut with "Feels Good to Be You" campaign. (Campaign Middle East) 7Up has joined forces with Beirut art collective The Dihzahyners to highlight the work of this group of young artists and designers. The video, created by Vice, is part of a global 7Up campaign to celebrate the new positioning of PepsiCo’s second-biggest beverage.

Snapchat prices Discover ads at two cents. (Ad Age) Snapchat will now charge advertisers two cents per view for the 10-second ads that run in between articles and videos on its Discover platform, Snapchat's Nick Bell announced Thursday at a NewFront presentation for both DailyMail.com and EliteDaily.com. The product is aptly called Two Pennies. "It's a really, really simple product," he said. "It's a 10-second ad, two cents per view to reach a really engaged audience."

Keeping away from the Kardashians. (The Daily Beast) A new app called #KardBlock aims to banish all mentions of the Kardashian Klan. Its inventor tells The Daily Beast why he did it, and why he’s under attack for it. "Basically, what was happening was that there were Kardashians everywhere, and I wanted to do something about that," says 21-year-old viral marketer James Shamsi. "This is not going sit well with a lot of people. We are living in a time when important news is being squashed down by either adverts telling you that you need Viagra or Kendall Jenner getting into some sort of a scrap. Ultimately, we are hoping to change that by making something that can really help people."

Daily Mail hooks up with Snapchat. (Mumbrella) The Daily Mail has singled out Snapchat as its social media partner of choice as it looks to engage with younger readers. The British publisher used its first presentation at the Digital Newfronts in New York to tout the success of its partnership with Snapchat in reaching the younger 18-24-year-old audience. Jon Steinberg, CEO of the Daily Mail US, told a room full of 30-something media buyer: "Our number two focus after our own owned and operated property is Snapchat. Why is Snapchat important? Because it is so big and so important, and you guys don’t know that because you are all too old to be on it."