Apple eclipses Samsung with $13.6 billion Q1 profit. (Marketing) Apple has revealed it sold 40% more iPhones in the first three months of 2015 than it did in the previous year, helping it to beat analysts' expectations with a quarterly net profit of $13.6 billion. Rival Samsung will Wednesday reveal early sales figures for its latest challenger to Apple’s dominance in mobile, the Galaxy S6. Analysts expect that the Korean firm’s net profit will decline around 30% year on year to 5.3 trillion won ($4.98 billion).

Irish bookmaker bets on gay marriage vote. (Campaign UK) Paddy Power has launched a tongue-in-cheek campaign to promote its odds on the outcome of Ireland's gay marriage referendum. The campaign, featuring a balaclava-clad newlywed male couple, launched in Dublin Monday and was produced by BMB. It features the headline "Tiocfaidh Ár Lá," which translates as "Our day will come." The phrase is associated with Irish republicans and often used to express their belief that, one day, Ireland will be unified. (Paddy Power says the "Yes" vote is likely to win in next month’s Marriage Equality Rerendum. It is giving odds of 1/10 for a Yes win and 5/1 for a No win.) 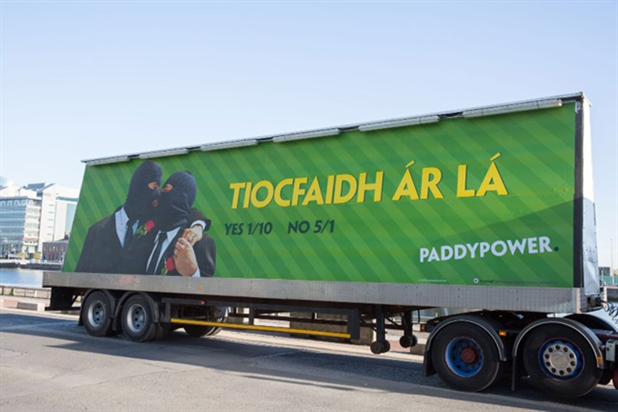 London Tube campaign combats unwanted sexual behavior. (Campaign UK) Transport for London and the police have launched an interactive video campaign encouraging people to report unwanted sexual behavior on public transport. The "Report It to Stop it" campaign by M&C Saatchi, TfL’s long-standing creative agency, is centred on a 70-second video that puts the viewer in the shoes of a victim of a sexual incident.

American Red Cross CMO talks purpose. (Direct Marketing News) Peggy Dyer says urpose is the key to a meaningful life, both for individuals and businesses. "That's the importance of purpose; it helps you stay grounded and helps guide your leadership," Dyer said to a ballroom of senior marketers during her keynote speech at the 2015 Marketing Hall of Femme hosted by Direct Marketing News in New York. "As marketers, we need to always lead with purpose."

Ad task force investigates kickbacks. (Adweek) The 4A's and the Association of National Advertisers have announced a joint task force to examine accusations of media agencies pocketing discounts on volume media buys and not sharing the "kickbacks" with clients. Members include the heads of holding company media divisions like WPP's GroupM, Omnicom's Omnicom Media Group and Publicis Groupe's Starcom MediaVest Group, along with marketing leaders from Unilever, Procter & Gamble, L'Oréal, and Subway. Rounding out the panel are 4A's President Hill, ANA CEO Bob Liodice and Horizon Media CEO Bill Koenigsberg, who's also chairman of the 4A's board.

Bud Light tagline gets pushback. (The Consumerist) The brand's #UpForWhatever hashtag has raised ire thanks to messages on bottles such as, "The perfect beer for removing ‘no’ from your vocabulary for the night." As The Consumerist notes, "Given the role that alcohol plays in many things that would have been a 'no' without a night of drinking — driving under the influence, sexual assault, vandalism, public urination, random 'woot-woot'-ing as you ping-pong down the sidewalk — it’s probably not the best idea for a multinational multibillion-dollar business like Bud Light’s parent company AB InBev to publicly acknowledge that its product can lead users down a path to stupid consequences."

Twitter Ventures invests in indoor beacon ad startup. (Beta Boston) Swirl Networks, a Boston-based advertising software startup, says today that it’s raised a new $18 million investment round. One of the investors is Twitter Ventures, a venture-capital arm that the social media service quietly debuted about a month ago. The money will help Swirl grow quickly and add software features that its customers want, including possible integrations with Apple Pay and the wearable devices like the new Apple Watch, chief executive Hilmi Ozguc said.