What happens to a controversial $250 million vaccine awareness campaign when a new administration takes over? PRWeek speaks to HHS veteran Mark Weber for the inside story and historical context.

If Mark Weber was searching for a comms challenge last year, 2020 was only too happy to oblige.

By early fall, the career of the deputy assistant secretary for public affairs at the Department of Health and Human Services straddled two of the three watermarks of an unprecedented year: the COVID-19 pandemic and former President Donald Trump (the third being the U.S.’ racial reckoning).

Public health is not strictly in Weber’s remit, but his boss at the time — and Trump political appointee — assistant secretary for public affairs Michael Caputo, asked him to develop and lead the communications campaign to convince reluctant Americans to take COVID-19 vaccines.

As Weber shepherded his plan through the halls of HHS and federal procurement, news of the proposed campaign leaked and the gaze of the national political media focused intently on the initiative.

The Defeat Despair activation, as it was called, was critiqued in the media as a loosely disguised pre-election PR effort for Trump. At the same time, HHS was also accused of subordinating public health information to promote Trump’s political self interest.

The added scrutiny, including from high-ranking House Democrats, forced then HHS Secretary Alex Azar to pause the activity and convene a committee to review the plan.

Eventually Azar’s panel decided the campaign would work — with major alterations. As 2020 headed into late fall and the FDA approved the Pfizer/BioNTech and Moderna vaccines, it looked as if the vaccination effort and Weber’s comms campaign were back on track.

But Trump’s election loss in November meant a new administration would ultimately control HHS as well as the vaccination rollout, including Weber’s campaign to convince people to take the shots.

As of mid-January, the transition to the Biden administration still had a ways to go. Though Biden had an HHS Secretary designate, California attorney general Xavier Becerra, it would be some time before he would be confirmed.

The fate of the many Biden HHS political appointee picks, which required Senate approval, was still undecided. “We were at the ‘sitting and waiting for the new boss to arrive’ stage,” Weber says.

The new administration did make some changes. Biden invited former FDA Commissioner David Kessler to be the science lead for the vaccination effort and asked U.S. Surgeon General Dr. Jerome Adams to step down. He also signed a series of pandemic-related executive orders.

Weber has been in “constant contact with the incoming team” during the changes. 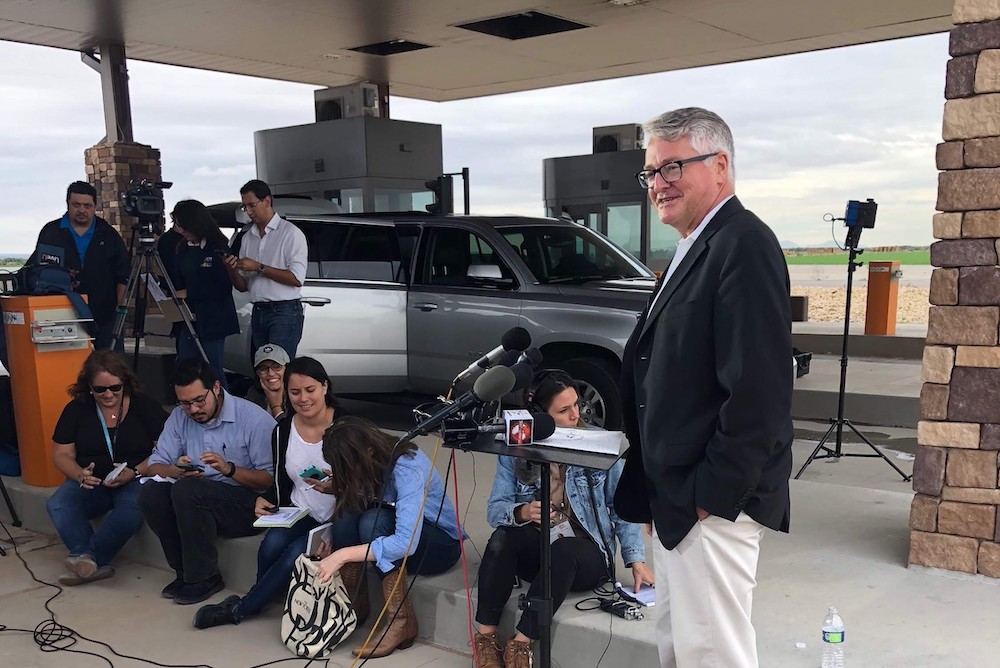 But when it comes to the future of the COVID-19 comms campaign, Weber is less equivocal.

In a document outlining his strategy to fight the pandemic released a few days after he took office, Biden said “a targeted, stakeholder- and data-informed vaccination communication campaign will be launched to encourage vaccination in all communities.”

It wasn’t clear if HHS would use any of the work Weber had already done, although he says initial discussions with the Biden team had been promising.

“I have presented what the campaign is, where it is or where it's been and the scientific basis for the work, what has been accomplished,” Weber says. “They will make a decision about how it all moves forward.”

“The term we're using is integrating, so taking the foundational work that has been put into place and integrating it with what the Biden administration intends to do,” Weber adds.

For now, Weber is serving as acting assistant secretary for public affairs — Caputo's old job — until the Biden team fills the role.

Weber’s $250 million plan got the final official OK last September and the effort to inoculate the public began in December, but there has still been no large-scale media push to convince the general public to get vaccinated because of the slow nature of the vaccination effort.

Weber agrees: “The plan is not working and because there are people who want to get vaccinated [and can’t]. The reliability is just not there yet.”

Once it is and vaccines become widely available to most Americans, Weber expects the big advertising push to kick in.

“The challenges … in terms of distribution are very real, and advertising to the public to get vaccinated would be a disservice at this point because the distribution mechanisms are still being worked out,” he explains.

Weber says Biden’s people are “absolutely” on the same page about delaying the campaign until vaccinations are available to far more people.

In the meantime, the new administration has embarked on fresh vaccine acceptance communications efforts, predominantly focused on minorities, rural communities and military families.

Weber says these are educational and partnership efforts on behalf of individual departments were not part of the activation he was overseeing.

An HHS official says: "We are continuing to develop and will roll out new elements of our vaccine campaigns, with more to come in the weeks ahead, as more members of the public get access to the vaccine and it becomes even more important to be messaging to the public about the safety and importance of utilization."

And an administration official recently told NBC: “The last thing we want to do is say, ‘Go out and get your shot,’ if there’s no supply.” 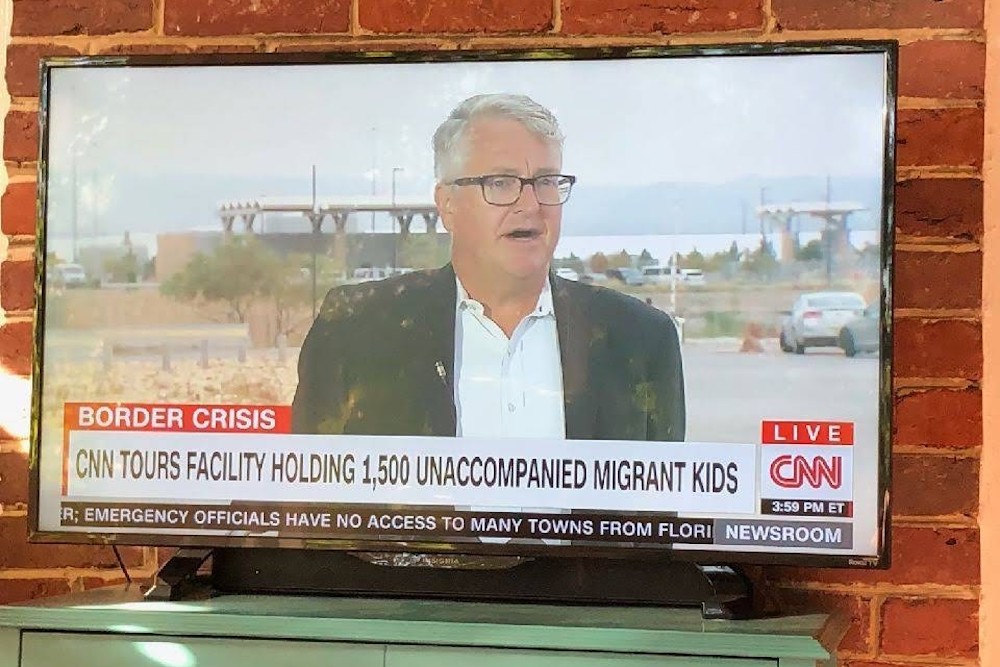 HHS is charged with caring for unaccompanied minor illegal migrants while their fate is being determined and a sponsor in the U.S. can be found to care for them. Weber first became familiar with the issue working for the Obama administration as a surge of unaccompanied minors came across the Mexican border in 2014.

“It was 60,000 kids, and it totally overwhelmed the capacity of HHS shelters,” he says. “Not only did the system run out of capacity that year, but the program also placed kids with human traffickers … 2014 was a really bad year for the program.”

But in the first two years of the Trump administration, the comms challenge only got tougher. Weber’s work explaining how HHS cared for immigrant kids foreshadowed his experiences defending the vaccination comms campaign because people assumed the efforts were a cover for, and defense of, Trump’s policies.

“A lot of people perceived that’s what I was doing and they would directly confront me with it,” he says. “But I was not part of that [zero tolerance] policy. My role was to help people understand the HHS component of it. And we put together a very aggressive program of inviting reporters in to see the facilities.”

According to Weber, the tactics worked: “I could point you to a number of stories where we went from being called concentration camps and juvenile prisons to even The New York Times shifting to calling them facilities that help kids.”

So Weber is no stranger to problematic briefs. But despite the consternation generated by Defeat Despair, that initiative crossed none of his political or ethical borders. He takes pride in it and the work it took to get it where it ended up today.

Weber first learned about the effort in early July when his political bosses told him HHS would allocate roughly $300 million for a comms campaign using celebrity influencers to create vaccine acceptance.

One of the first challenges was the timeframe. Choosing the agencies had to be competitive, but Weber notes the federal procurement process “normally takes 12 to 18 months at HHS for the amount of resources we are talking about. We were able to compress that to a six-week process,” he adds.

The campaign was initially conceived in two parts. The first was a traditional $250 million health education campaign ultimately awarded to consultancy Fors Marsh Group, which subcontracted work to agencies including WPP's VMLY&R and Wavemaker.

The second was a much smaller $15 million splashy comms effort involving celebrities. Public health officials, including Dr. Anthony Fauci (named PRWeek’s top health influencer of 2020), were to team up with celebrities and influencers to tout vaccinations in PSAs. That contract was awarded to consulting firm Atlas Research.

But when Politico broke the news about the campaign before those agencies had been chosen, the idea of using celebrity endorsements became especially problematic.

Some 270-plus celebrities were initially considered for the campaign. But only 10 were approved after the rest were dropped, Politico reported, for a perceived leftist or anti-Trump bias. And those decisions only buttressed accusations that the whole campaign was basically Trump propaganda.

“The media enquiries were relentless,” Weber says. “Then the Congressional oversight started and that was relentless. In each case I would explain, ‘Here's the campaign. And here's how it was awarded.’ That's when Secretary Azar said he needed a panel of public health experts and communications experts to review this project.”

The panel — Fauci; Adams; Dr. Anne Schuchat, principal deputy director of the Centers for Disease Control and Prevention; and other leaders and communicators from the National Institutes of Health, Office of Minority Health and Indian Health Service — met on October 9 and reviewed both versions of the campaign twice before recommending a new direction.

“We determined that the celebrity component would not continue and we would go forward with the science-based approach built into the Fors Marsh Group contract from the beginning,” Weber says.

Fors Marsh referred enquiries about the current state of the campaign and when the big public push will start to HHS.

When it does eventually begin, the campaign will target the “moveable middle,” Weber says: people who are open to being convinced about the safety of COVID-19 vaccines but who have concerns.

“Those folks are like, ‘I don't know. And I'm not sure.’ That's who the advertising will target,” he explains.

Even in that moveable middle, the comms campaign will take varying approaches, Weber says: “It's multiple audiences with multiple needs and we must ensure that not only is the message credible, but also the messenger.”

“Other people say, ‘I want to know what my friends and family think,’” Weber adds. “Most of the people I work with are already in the yes category. But we're not advertising to ourselves.”

Biden’s team is targeting these skeptics while vaccines remain limited, ahead of a broader activation when supplies are more plentiful.

“Certainly part of our commitment is to launch a massive public affairs campaign,” said White House press secretary Jen Psaki recently. “It takes a little time to get all your ducks in a row and get that going, but part of what we're also trying to do is utilize our experts to be out there publicly.”

Time will tell whether that push encompasses elements of Weber’s carefully laid plans, but it's fair to say the phrase Defeat Despair has been retired in the transposition to a new administration. As he himself states: “It’s what I signed up for.”

This article first appeared on PRWeek US.