In honour of International Women's Day, YouGov has released its BrandIndex 2020 Women’s Rankings, based on its impression score which monitors whether brands have a positive or negative impression with women. Such scores are critical for brands looking to increase market share, particularly in regions like Asia where women's income levels are rising fast.

According to the index over the past year, women around the world are registering strong affinity with many social media and Internet brands. YouTube dominated the 2020 global Women's Impression Rankings with top 10 showings in 19 markets around the world, while parent company Google placed top 10 in 15 markets, followed by WhatsApp in 14.

As it turns out, it is hard to make sweeping statements about women and brands in Asia. According to YouGov's findings, women in some markets recognise global brands such as Google, Facebook and WhatsApp strongly, while in others local entities shine. 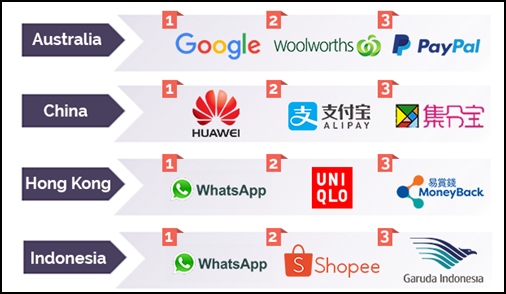 However in Japan, the top 10 is dominated by local names, with Rakuten in third, Uniqlo in fourth, Panasonic in fifth, Muji in sixth, and ANA in seventh. Travel attractions Tokyo Disneyland, Tokyo DisneySEA, and Universal Studios Japan, which entered the BrandIndex tracking list last year, are in first, second and eighth places this year. 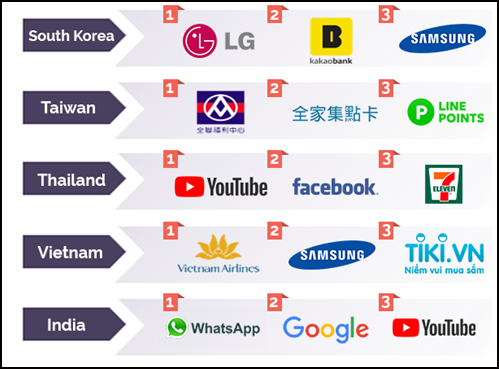 In India, Indonesia, Hong Kong and Malaysia, women recognise WhatsApp as their top brand. but below that chat app, there is a strong diversity in the top 10. For instance, in India, Google and YouTube round off the top three, in Hong Kong it is Uniqlo and Money Back and in Indonesia it is Shopee and Garuda Indonesia. WhatsApp, Shopee, OVO and Go-Pay make into the top 10 for the first time in Indonesia, securing first, second, seventh and eighth spots respectively. 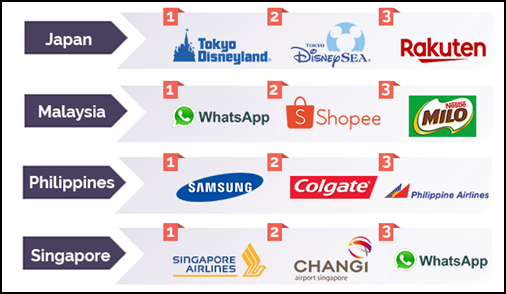 One of the markets with the biggest upheavals is the Philippines, even if the top two spots are still secured by Samsung and Colgate. Philippines Airlines jumps four places from last year to third, Cream Silk rises to fourth place from sixth last year, while YouTube rises to fifth from ninth. Local labels Rebisco, M.Y. San Grahams and Piattos enter the top 10 list for the first time, coming in eighth, ninth and tenth.

In contrast, Singaporean women seem to be measured about their brand preferences. Singapore Airlines secure first place three years in a row and Changi Airport has shown the greatest improvement and jumps two places from last year to second place. The top 10 brands are largely the same as 2018, with Channel News Asia the only one to break in, making it into the top 10 for the first time and coming in eighth.

The women’s rankings are based on impression index scores between 1 February 2019 and 31 January 2020.

If you're interested in new ideas and strategies to promote diversity and inclusion, we will be hosting Campaign Leading Change 2020 Conference & Awards (formerly Women Leading Change) on 28 May at the Raffles Hotel in Singapore.

This story was originally published on campaignasia.com

Brands and ads championing women all year round

IWD: Here are the women who inspire Campaign

Campaign podcast: Are brands getting it wrong over International Women's Day?