Café Bustelo, HBO Max and Presidente launched campaigns ahead of the movie release.

The play-turned-movie, written by Tony-award winner Lin-Manuel Miranda, tells the story of a Latin-American community in Washington Heights in New York, recently changed to Little Dominican Republic on Google Maps.

With anticipation and praise buzzing online, brands including Café Bustelo, Presidente and HBO Max launched campaigns ahead of the movie.

Campaign US has highlighted how they showed up for the release:

As a partner of “In the Heights,” Café Bustelo released a number of TV ads ahead of the World premiere that include scenes and lyrics from the movie about coffee — a cultural staple in the Latino community.

The spots, led by Publicis Groupe’s PSOne, will air on a rolling basis for one month. They are supported by banner ads on the Café Bustelo website, downloadable Zoom backgrounds for virtual viewing parties and Latin recipes.

“This partnership has been simply enjoyable,” said Jennifer Polkinghorne, senior manager of content and culture for food and beverage at The J.M. Smucker Co., which owns Café Bustelo.

The brand was also present at the World Premiere event at United Palace Theater in Washington Heights, where it rolled out a “yellow carpet” to match its brand colors, and placed backdrops of Washington Heights bodegas with Bustelo cans in the windows. Model and actress Joan Smalls took over the brand’s Instagram account from the yellow carpet.

The coffee brand also designed a custom clutch made from 4,000 Swarovski crystals in the shape of a Bustelo brick that Miranda’s wife, Vanessa Nadal, carried at the premiere, which will be auctioned for charity. Proceeds will be donated to the North Manhattan Arts Alliance, and Café Bustelo has also pledged to match the winning bid up to $10,000.

Fans can also enter a sweepstakes to win a Café Bustelo mug signed by members of the “In the Heights'' cast along with four tickets to the film. The brand additionally increased its annual scholarship fund for Hispanic college students, El Cafe del Futuro Scholarship, to $125,000 in recognition of the film’s theme of making dreams come true.

“It's the heart of our brand, and it's been really important to us that we support Latino scholars and hopefully have them give back to their communities as well,” Polkinghorne said.

Following the premiere, the brand placed a 12-foot Bustelo can for selfies, a coffee bar and cocktails at the “In the Heights” after-party.

Anheuser-Busch-owned beer Presidente, founded in the Dominican Republic, hosted a giveaway ahead of the premiere. Running until June 11, consumers ages 21 and older can enter to win $96,000, the same amount as the winning lottery ticket in the film that inspires the lyrics “what would you do with 96 G’s?.”

Fans can enter by following and tagging @presidenteusa and @Intheheightsmovie and using #contest to upload a photo to Facebook or Instagram that answers the question “How will $96,000 change your life?” Entries will be judged by a panel, including former Dominican pro-baseball player and chairman and co-owner of Presidente Alex Rodriguez. 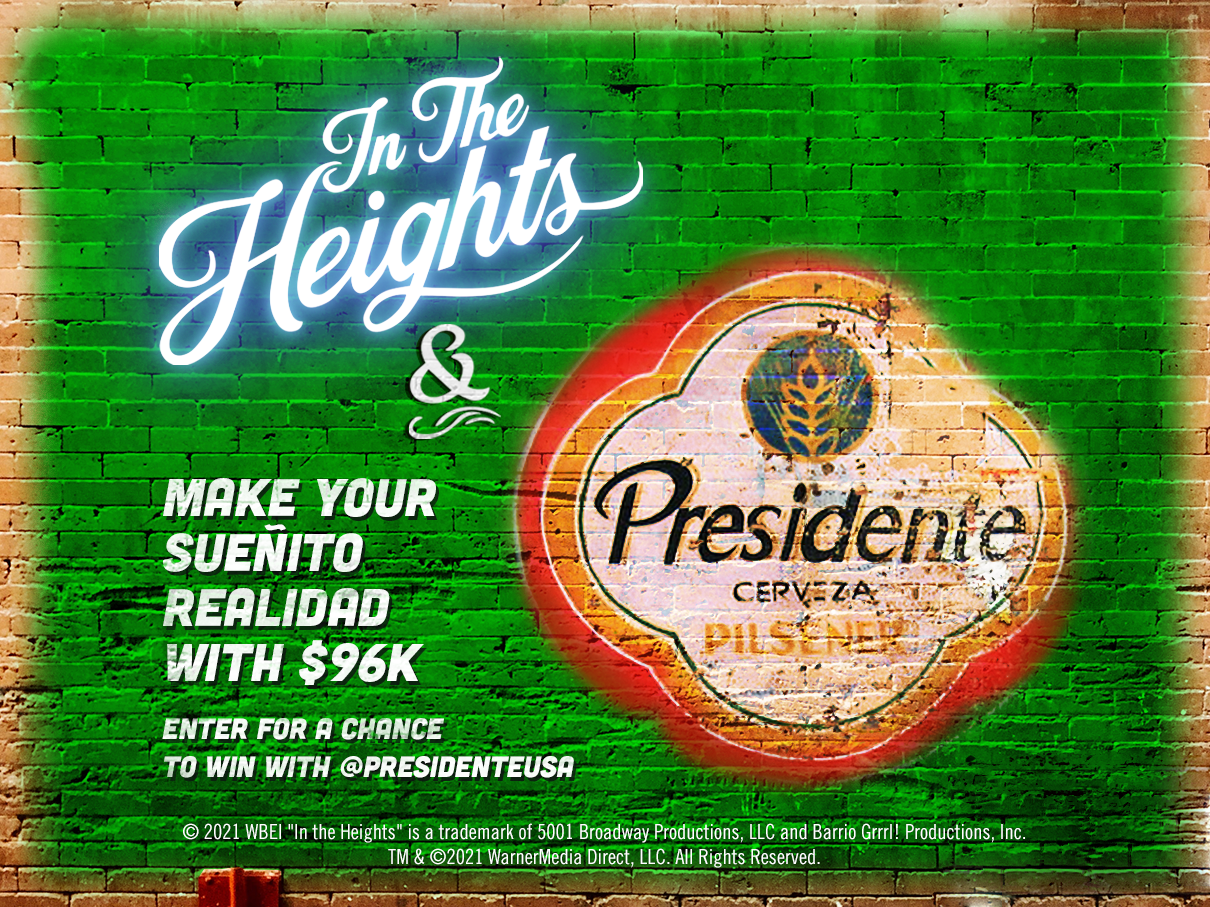 To correspond with the release of the film on HBO Max, the streaming platform will host a three-day pop-up experience from June 11 to 13 with 20 branded installations in Manhattan.

Participants can discover locations on an HBO microsite and scan a QR code that will grant them access to a scene from “In the Heights” and rewards from local businesses. People can continue to explore the map to unlock more rewards. 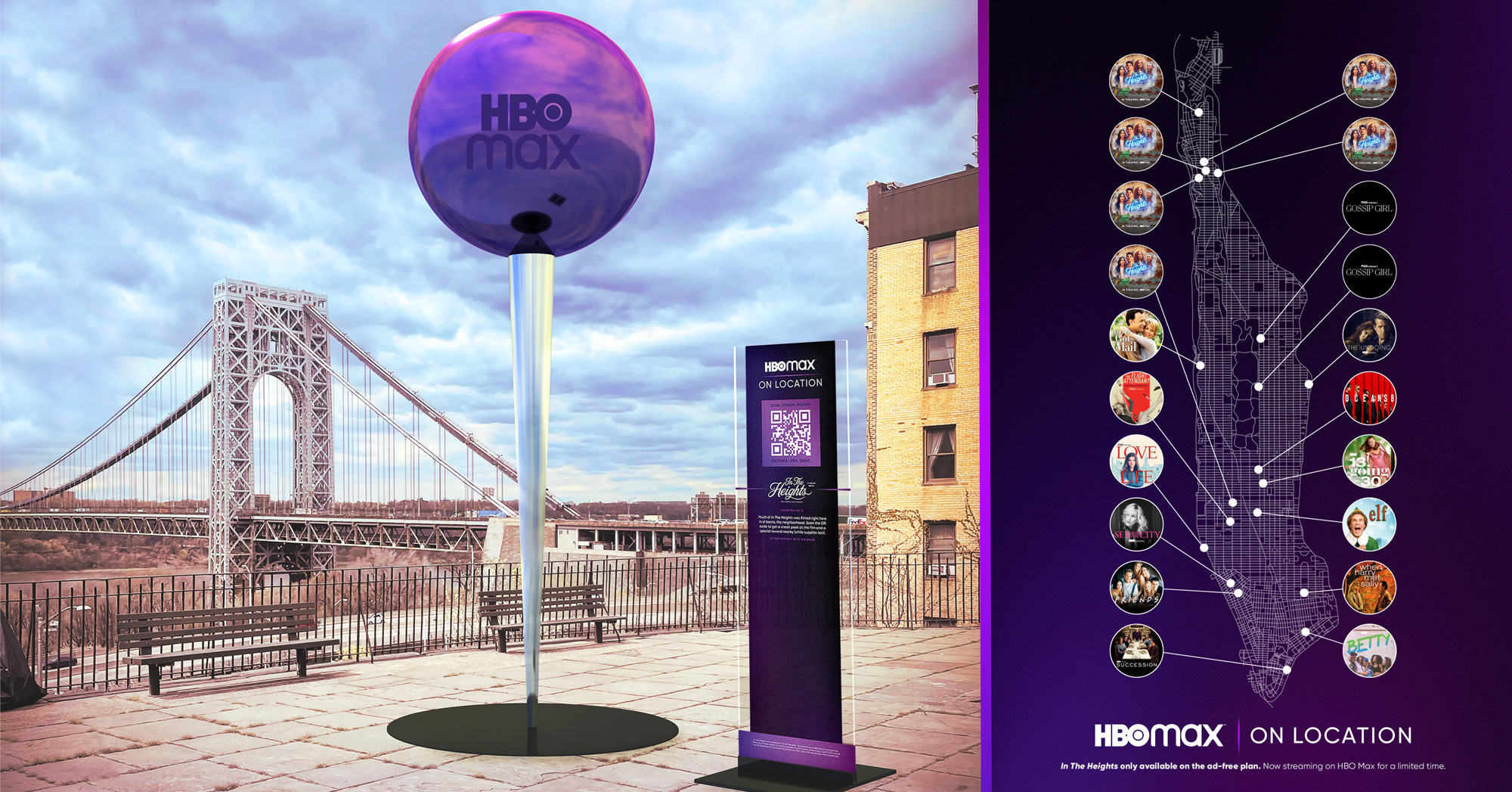 In addition, HBO Max Pa’lante will launch a social media campaign, #TellUsTuSueñito as well as an Our Rhythm, Our Dream spotlight page where it will share six curations of series and films that celebrate the intersection of music, dance, family, love and dreams.