Recent stumbles aside, Apple continues to exert a magical hold on its customers, many of whom will stand in line for hours, even days, to be the first to buy the latest iPhone. Once the coveted product is in their hands, they’ll broadcast their purchase on social media, amplifying the brand’s message more than any ad buy ever could.

"You walk past an Apple store and look at the buzz that they’ve created to just have people stand in line and wait to have their phones repaired. It’s just a phenomenon, right?" said Jeep head of advertising Kim House.

Apple is a prime example of what iris is now calling a "participatory brand." Last summer, the agency, which is based in London and has 14 offices worldwide, tasked 14,000 consumers (5,000 in the United States) with ranking 177 brands (50 from America) from favorite to least favorite. They then asked the same group of consumers detailed questions focused on six brands they would consider purchasing or using. In the end, iris coded and aggregated their replies to create its first Participation Brand Index (PBI), which measures return on involvement—not investment.

"The thing we're talking about here is, how do you get your market to do your marketing for you, and that idea of activating people to become the strongest weapons for your brand," said iris global executive planning director Ben Essen.

Many agencies have built in-house research arms to dazzle their clients with the golden insights to successful marketing campaigns. Edelman has its Trust Barometer. There’s JWT’s Innovation Lab, and Hill Holliday just launched its Brand Edge Index. Now, iris has the PBI, which orders brands not on sales or ad buys, but on five pillars of participation: passionate purpose, culture-shaping, category-innovating, people-powered and distinctive character.

"The most important is people-powered," Essen said. "That's what this whole thing is about really."

PBI’s top American brand—and top marketer overall—is Apple. Sixty-five percent of respondents felt that Apple "made them feel part of a community," while 74 percent felt that the brand "talks to me personally." Amazon, Google and Netflix round out the top four, with Netflix grading highest with millennials, 90 percent of whom feel that their friends and peers trust and enjoy it. 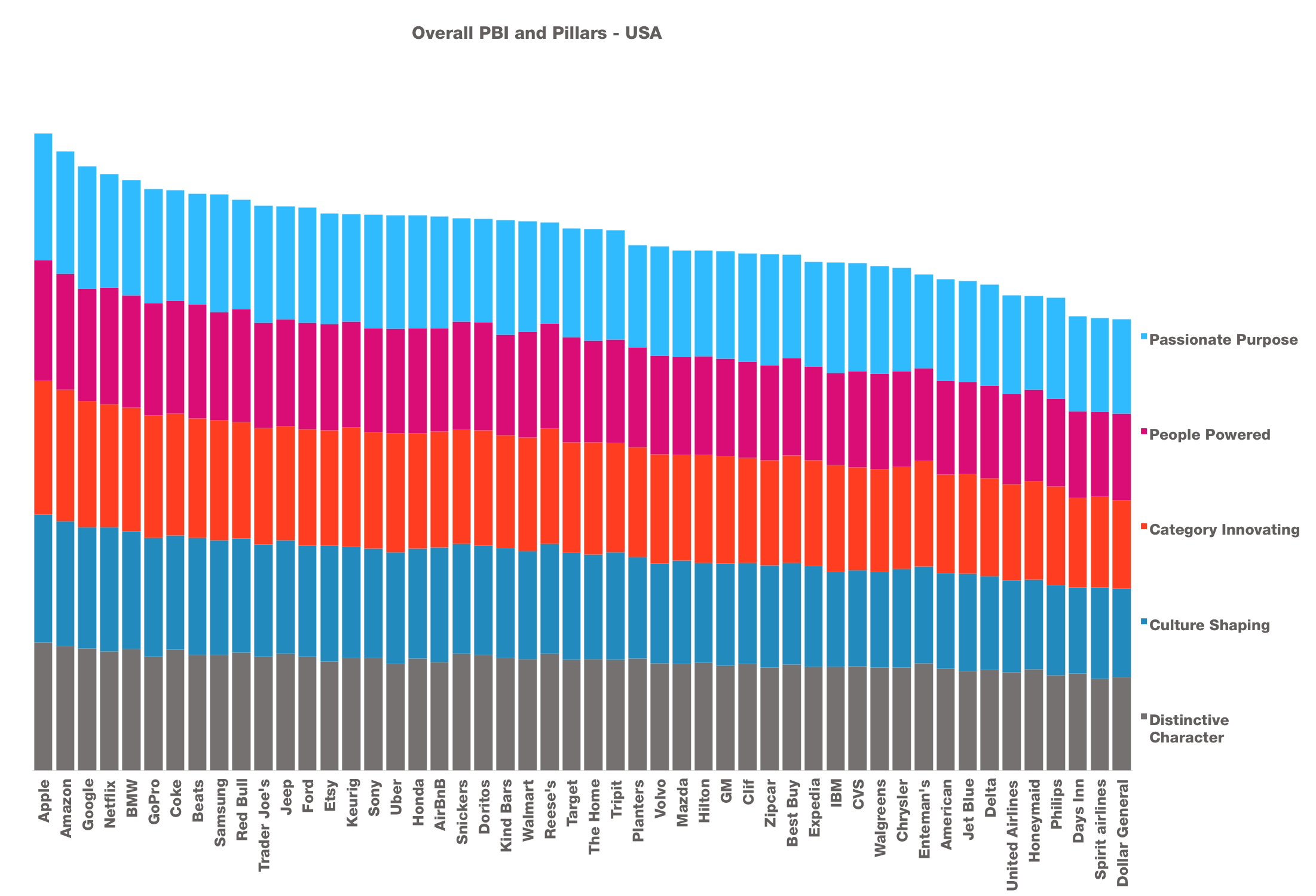 BMW ranks fifth overall in US participatory brands, but respondents dubbed it the most exciting brand in the study, calling it "a leader, not a follower" that stays "a step ahead of the competition." GoPro, Coke, Beats, Samsung, Red Bull and Trader Joe’s bring up the rear with the aforementioned Jeep coming second in the automotive category.

House admitted that Jeep "would like to akin ourselves to" a little bit of what Apple does. "We have become part of this culture of belonging," she said. "I think everybody seeks that, honestly."

That approach was brought to life last year by the "My Jeep Story" campaign to celebrate the brand’s 75th anniversary. House originally wanted to hire a professional author to write a book about the company’s history, but decided instead to let its customers do the job. "Why would we let somebody else tell our story instead of those who actually own the brand?" she said.

So Jeep made its fans part of the conversation by encouraging them to share their favorite Jeep moments on Twitter, Instagram and Facebook using the hashtag #myjeepstory. The brand compiled 75 of these tales, including a soldier who considers his Jeep his best friend and quotes from President Dwight Eisenhower describing Jeep’s entrenched role in the military, in a digital compilation. In the 2016 Super Bowl, Jeep echoed this sentiment with a spot from iris that ends with the line, "We don’t make Jeep, you do."

On the PBI, Jeep is 12th overall, beating out competitors Ford, Uber and Honda.

Important as participation may be, it’s becoming increasingly hard for any brand to connect with consumers, research suggests. Nearly 90 million Americans will use ad blockers in 2017, according to eMarketer, and less than 10 percent of brands are remembered after their media spend is turned off, iris found. The solution, according to the agency, is to become part of culture, not interrupt the flow with irritating ads.

"The participating brands are the ones that managed to infiltrate themselves within that consumer world that exists perfectly well without us marketing folk," said Essen. "Yes, it's all about experience, but most importantly, it's that sense that every decision anyone makes ever is informed by a social context, by the people around us. How do you build a brand for those networks and those conversations and that social way of operating?"

Though the study itself won’t be made public, iris has published a number of articles delving into the findings. For example, "Might Uber become the next Xerox or Kleenex?" argues that Uber is in danger of becoming a generic. Even though the brand ranked no. 4 in the automotive category, respondents didn’t find Uber to be provocative or challenging, and it scored nearly at the bottom on being personal. Thus, iris argues that the ride-sharing company feels more like a commodity than a brand, adding that this might be why Uber hired its first US agency, Deutsch Los Angeles, in August. 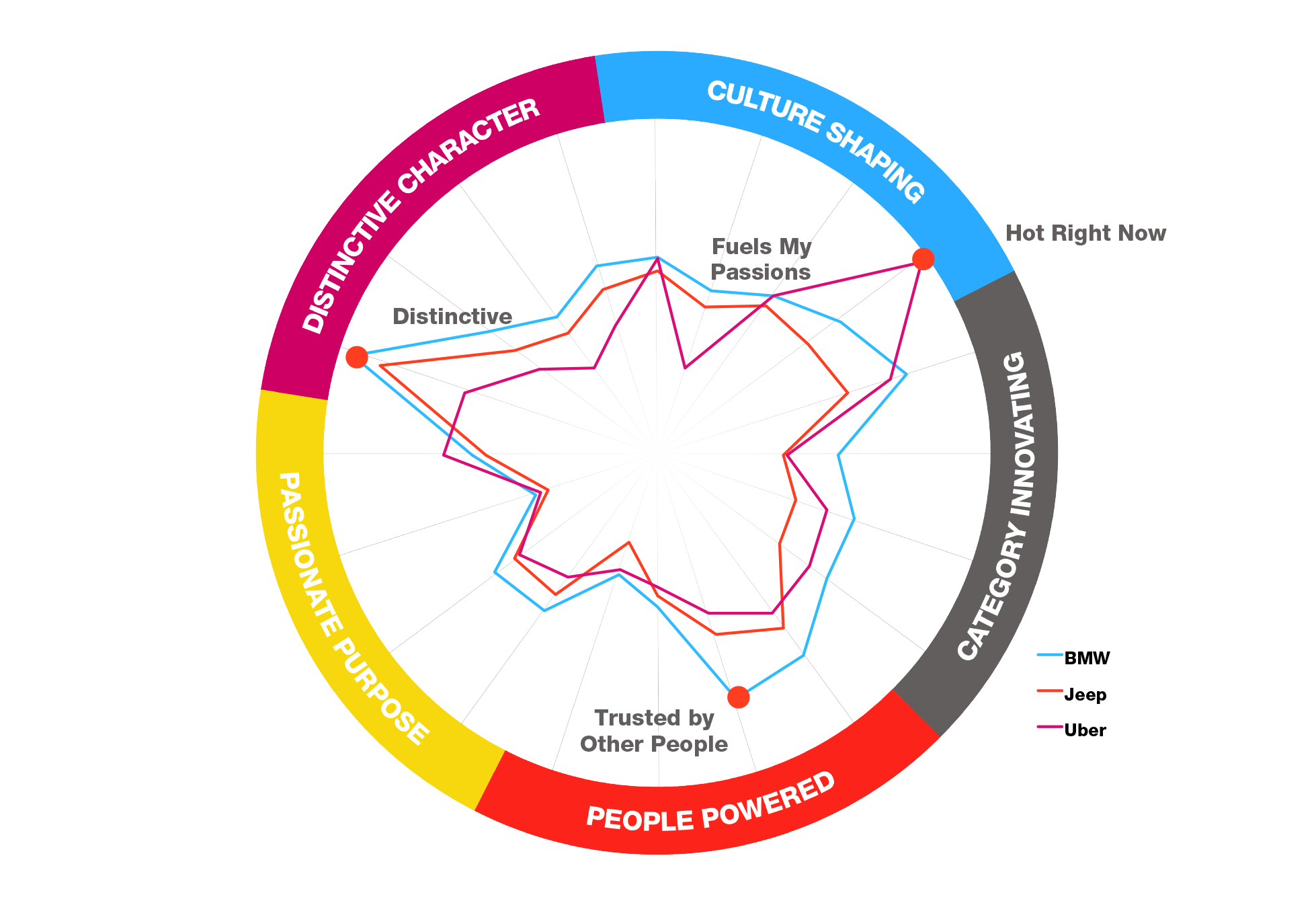 Another brand in danger of becoming a generic verb, according to the study, is Airbnb, which is no. 19 on the Participation Index overall, but Airbnb CMO Jonathan Mildenhall isn’t worried. He said the company is well aware of this potential pitfall: "The role of marketing is to become ubiquitous in pop culture, and then the role of product is to make sure that the product experience is always superlative, so we never become the generic that doesn’t benefit from the choices that consumers and travelers make."

A lack of attention to the product may explain why the travel category was the worst performing group in the index. "I think what makes travel worse is the tech expectation's so high," Essen said. "People think stuff should be fluid now, and travel is full of barriers."

But Mildenhall, who said that Airbnb wants "to become the world’s first community-driven superbrand," believes his company recently fixed this with its new app. "We observed this time last year that technology was not enabling people to have as good a travel experience both in the planning but also in the trip itself. That’s why we launched Airbnb Trips, which takes all of that friction out of the travel experience, and really uses technology as an enabler to seamlessly book different homes, different experiences and manage itineraries all in one place."

Though the Participation Index naturally favors major brands with large followings, iris lead strategist for the Americas Mike Giannone insisted there are lessons in the research for smaller brands, too. "I would never suggest to a brand you must do these five things," Giannone said. "It’s a process, and it’s not just marketing. This is brand behavior as well. Brands need to take this on as part of their mission in how they behave."

Those marketers who choose to approach business as usual face being left behind, according to iris. In 2017, three out of four brands are failing to build any emotional engagement with consumers, and consumer apathy is three times higher for brands that fail to engage them.

"We think the industry is sleepwalking itself over the precipice," Giannone said. "We want to open clients’ eyes to the problems of clinging to a model whose returns are rapidly diminishing. The brands who pivot and create conversations and content people actually want to engage in will be the only winners."

And iris has the research to back up its claims. According to the PBI, the top 20 participatory brands outperformed their competition without outspending them. In fact, during the last three years, their return on investment yielded a quadruple return, suggesting that getting your audience to do your marketing for you isn’t just a feel-good move; it impacts the bottom line.

Airbnb's Mildenhall: Listen to your mentors

How automotive brands can win over the always-on consumer

Airbnb's Mildenhall: Entertainment can be a marketing platform

Airbnb is changing its name in China

Red Bull's own goal is a cautionary tale for brands

Maker culture is critical to innovation, for more reasons than you think

Is your marketing dashboard lying to you?

Marketers admit they're clueless when it comes to digital, study finds