Many focus on giving back and celebrating being together again.

As people finally gather together again in-person for Thanksgiving this year, brands and agencies are gearing up for a festive holiday season.

Advertisers are leaning into the spirit by focusing on sharing joy with loved ones and the spirit of giving.

Campaign US has highlighted a few of our favorites:

This Thanksgiving, McCormick is honoring those who have given back to their communities. For its “Tiny Kitchens x Big Meals” campaign, the spice brand is partnering with actor Eric Stonestreet to give fully-stocked tiny kitchens to local heroes: Shirley Raines in Los Angeles, Derrick Hayes of Atlanta, and Angela Torres of New York City.

Each hero will receive a new tiny kitchen with an oven, sink and appliances, as well as a fully stocked pantry with groceries and McCormick spices, seasoning and extracts. McCormick will also provide holiday recipes, including two from Stonestreet, plus a clean up crew.

From November 16 to 30, people can nominate the next set of community advocates using the McCormick Flavor Maker app.

Kroger wants to make up for lost time this year by celebrating the 2020 and 2021 holiday seasons together. The supermarket chain released a limited-edition, custom dinnerware set, called the “Doubly Special Dinnerware Set,” in partnership with ceramist David Kim. Led by DDB New York, 360i and Dentsu, the campaign incorporates food influencers such as Dzung Lewis (@honeysuckle), Matt Robinson (@realfoodbydad) and Kolby Chandler (@chefkolbykash, as well as culinary experts from the Food Network, who will share recipes and entertainment tips.

One of the sets will land in the International Museum of Dinnerware Design. Kroger will give a second set to a family in need and donate to the Zero Hunger and Zero Waste initiative. 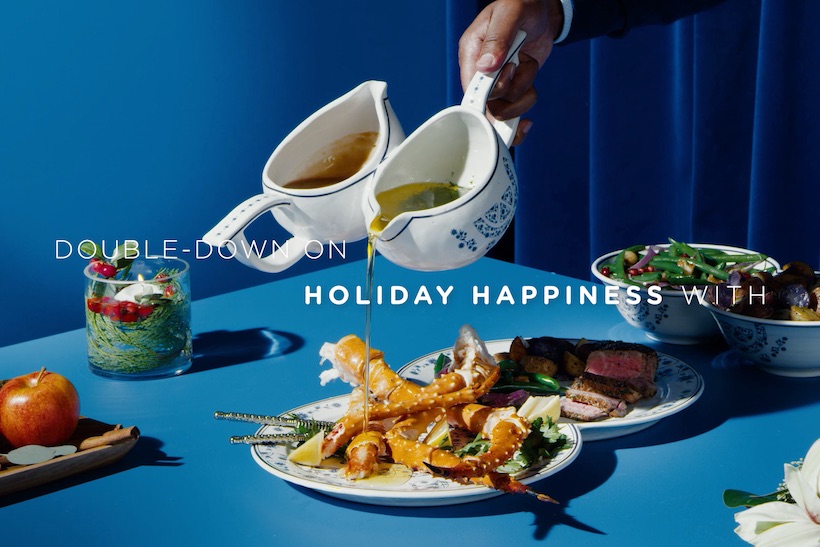 This holiday season, Frito-lay has tapped Jimmy Fallon for his own rendition of It’s The Most Wonderful Time of the Year. In an anthem spot, Fallon depicts the childlike wonder of holiday moments such as late-night gift wrapping and “snack tosses.” In addition to the spot, which will debut during the Macy’s Thanksgiving Day Parade, Frito-Lay’s Holiday Shop is back,  featuring branded merchandise such as Cheetos socks and Doritos ornaments. Each item comes with a bag of chips.

The snack brand will also donate up to $500,000 to Toys for Tots through December 31 when consumers purchase specially-marked holiday snack packages. In total, Frito-Lay and parent PepsiCo will donate $1 million to Toys for Tots this holiday season.

On Thanksgiving Eve, November 24, a notorious drinking day, Budweiser Zero and Uber will launch “Zero Hour” at select bars in 30 U.S. cities. People can try a complimentary Budweiser Zero from 12 to 1 a.m. local time and get a free ride home.

Participants must sign a pledge to drink responsibly on Budweiser’s social media page in order to unlock up to $25 off their ride home with Uber.

For Giving Tuesday, Media Matters Worldwide (MMWW) is partnering with the Alameda County Food Bank for the third year to offer pro bono media for a campaign to drive donations. Last year, MMWW exceeded the Food Bank's goals by 800%, bringing in more than $2.5 million in donations. This year the focus is on attracting much-needed volunteers.

MWW will run a second pro-bono campaign that tackles education gaps in San Francisco with Students Rising Above, a charity that supports low-income, first-generation college students. MMWW will donate and post on social media leading up to Giving Tuesday. The agency will also launch an internship program exclusively for the nonprofit, where three employees will mentor students throughout the year.