More than half of brands plan to manage more of their data in-house amid a growing reluctance to share it with agencies and digital media owners.

Taking greater control over their data is more of a priority for marketers than bringing media and creative in-house, which has not risen markedly despite interest from brands.

Marketers are also increasingly worried about media measurement, with 70% fearing it has become "too corrupted" and "inconsistent".

These are some key findings from Media 2020: Refresh, a report by consultancy MediaSense and ISBA, which surveyed 250 marketers’ current attitudes – two years after the first Media 2020 survey.

Marketers can often be critical of their agencies but this study should ring alarm bells.

Brands are "taking more control", using fewer agencies and "customising" their approach to media and marketing, according to Andy Pearch, co-founder of MediaSense.

"Rapid developments in technology and customer data" are driving "a profound and sustained shift", he said in the report.

In addition, 80% of respondents believe that organisational change is required "if they are going to develop and deliver dynamic creative".

The research warns that the "elephant in the room" is the rise of management consultants such as Accenture, Deloitte, EY and PwC, which are moving into digital marketing and challenging the role of agencies.

Data is the priority

Data analytics and insight are considered "the critical media capability" for marketers, with 78% of respondents citing it as the most important capability, up from 67% in 2015.

"Brands have decided they should in-source capabilities which are critical for delivering competitive advantage," the report says. "Most of our respondents want to own their technology stacks [that bring together data from many sources], even if they don’t ultimately want to manage them."

This explains why 54% of marketers said they will rely most on their in-house team "for strategic advice on data management" – up from 42% who said that two years ago.

One unnamed marketer is quoted as saying: "If you have a data management platform, you need a strategy and you need to own it." 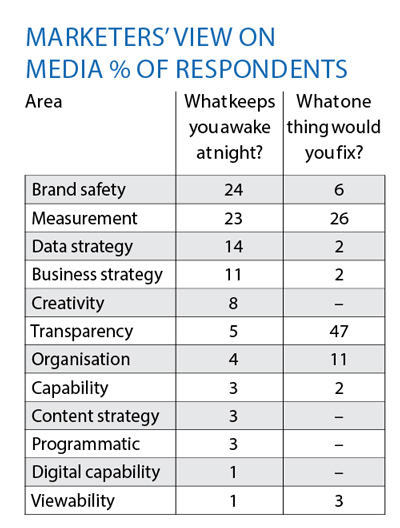 As data and customer relationship management assume greater importance, marketers are becoming more reluctant to share this information with agencies and tech platforms, particularly as the European Union General Data Protection Regulation will enforce tougher rules from next year.

"For the first time, we heard some clients openly talking about not sharing their data with their agencies," the report notes.

One marketer said: "I do not want an agency telling me what’s working and what’s not working. I want the agency providing me with insights with the small data they see and then I want to use that in conjunction with a much richer view that I have to get a sense of whether it’s been successful or not."

The study warns that the role of agencies is "becoming more exe-cutional" and risks "being gradually disintermediated".

One of the biggest forces of disintermediation has been the rise of Google and Facebook, which have been striking direct relationships with advertisers. However, the survey found that there is a growing wariness about these tech Goliaths. "We need to be very careful we don’t create a system where all the data sits within the big digital companies," one marketer said.

Marketers need to be more agile, which is why they are bringing some digital skills in-house and using fewer agencies to ensure a more integrated approach – and to save money.

The survey found that 62% of marketers plan to use fewer agencies, up from 58% in 2015. While brands are taking data in-house, they recognise that other disciplines such as content and programmatic require expertise from external agencies.

According to the study, 44% of marketers look to a creative agency for content development, up from 41% in 2015. By contrast, only 28% of marketers expect to do it in-house compared with 33% two years ago. Media agencies are seen to have little role in content creation.

Some big brands are turning to one agency holding company to provide a range of services, as WPP is doing for Walgreens Boots Alliance. One marketer joked: "Having ‘one throat to choke’ really works!"

There is also a growing trend for an "on-site" agency that can be based inside the client’s office, as Oliver and Engine’s NuFu are offering brands.

When asked what aspect of the media industry they would like to fix, transparency was the biggest issue for 47% of marketers surveyed.

However, when asked what kept them awake at night, 24% of marketers cited brand safety and 23% said measurement, while transparency barely registered.

The report suggests transparency issues are "fixable" in the wake of scrutiny by ISBA and the US Association of National Advertisers. As one marketer said: "There needs to be honesty about where the money is made on the agency side – and recognition about the importance of paying fairly by the advertisers. We have created a ghastly chicken-and-egg situation."

However, fears around brand safety and independent measurement are more systemic. Most respondents felt there has been little or no progress in industry measurement since 2015, with 70% agreeing that "media measurement currencies are increasingly becoming too corrupted and inconsistent for our purposes".

One other finding is a shift back in favour of paid media over earned and owned channels. In 2015, 71% of respondents agreed that there would be a significant shift in investment and focus from paid to earned and owned media. Now, only 44% think that is the case. Paid media is trusted, particularly in more traditional channels, at a time when doubts about the digital media supply chain have increased.

One marketer said: "From a brand side, I’m yet to see really convincing evidence that budgets should be flooding into digital at quite the rate they seem to have done."

Looking ahead to 2020, Pearch believes brands will have more varied, agile and customised relationships with their agencies. "The rate of progress and change, however, will be frustrated by legacy attitudes, systems and processes as well as, unfortunately, vested interests," he said.

WPP’s decision to merge MEC and Maxus, which was announced after the completion of this report, is proof that a lot of "legacy attitudes" could be swept away sooner than 2020.

How can agencies rediscover their swagger?

The changing role for agencies in a world of modern brands