How Covid and geopolitics forced many brands to pass on both the mass appeal of the Olympics and a very special moment within China.

The combination of Lunar New Year, China’s biggest holiday and typically the world’s largest annual human migration, together with one of the world’s largest global sporting events, the Olympic Games, is sure to be a rare and memorable moment in history for millions of Chinese people.

“It’s a very special Olympics actually,” explains Yinbo Ma, chief creative officer of McCann Worldgroup China. “It will be a ‘once in a lifetime’ event because [the two] will overlap.”

Thematically, the spring festival and the Games play well off of one another. The coming together of families for kinship, support and celebration, buoyed by the opportunities and challenges of a new year, fits very well with the Olympic spirit of bringing the world together to cheer on your country's athletes and support their hopes in friendly gamesmanship and competition.

Among the dozens of adverts featuring American-Chinese star skier Eileen Gu are some for ecommerce platform Jingdong which reference Lunar New Year. Meanwhile, reports of Gu partaking in Chinese meals has been widely seen as part of her homecoming to compete for China. 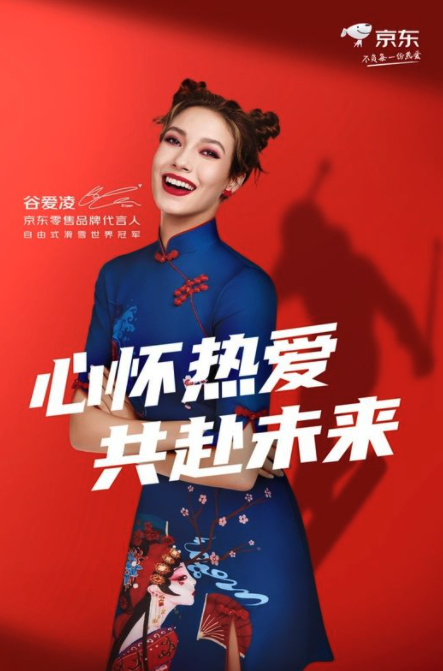 Eileen Gu in a Jingdong ad

Yet when one looks at the vast majority of marketing and branding associated with the Games, relatively few brands have fully embraced the opportunity of celebrating both together. One could consider this a metaphor for the muted global brand response to what could have been a very special Olympic opportunity if Covid and geopolitics were not part of the equation.

It wasn’t supposed to be like this. Leveraging the success of the Beijing Summer Games in 2008, China has been systematically building support for its winter sports programs for the past seven years, since winning the rights in 2015 to host these 2022 Winter Games. A recent Beijing Winter Olympic report from Fuse, OMG’s sports marketing firm, documents these changes.

Not only has the value of China’s sports industry risen from 1.71 trillion yuan (US$269 billion) in 2015 to 2.95 trillion yuan (US$464 billion) in 2019, but affinity, viewing and participation rates for winter sports have steadily grown. Infrastructure has risen in lock step, with a 36% rise in the number of ski resorts in China during that period and an estimated 70% gain in ice and snow tourism from 2017 to 2022.

In 2020, winter sports audiences managed to match the viewing rates of perennial favourites such as badminton and table tennis, with a younger female demographic heavily favouring the winter sports that have become ‘trendy’ and ‘cool’ across China, the report says. 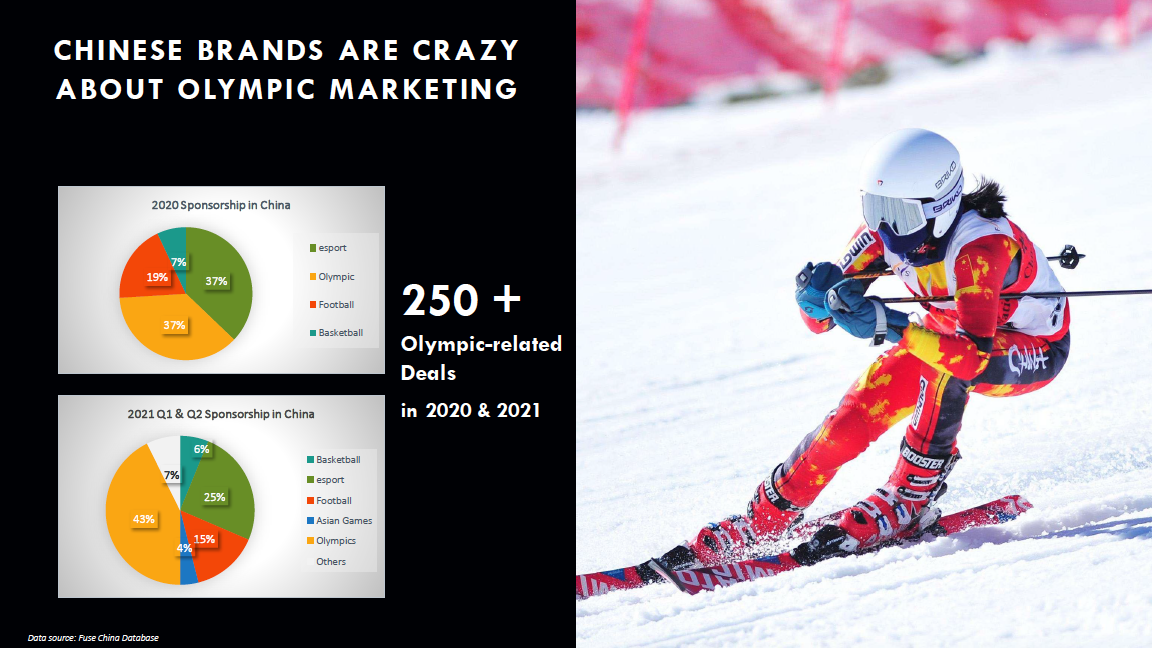 Chinese brands have certainly taken notice, growing their sponsorship spend by 8.9% annually between 2015 and 2019, with more than 250 subsequent Olympics-related deals in 2020-2021, matching and then surpassing the popularity of esports sponsorship in China. Fuse has noted more than 45 Chinese brands signed with the Beijing Winter Olympics as official partners, sponsors and suppliers. 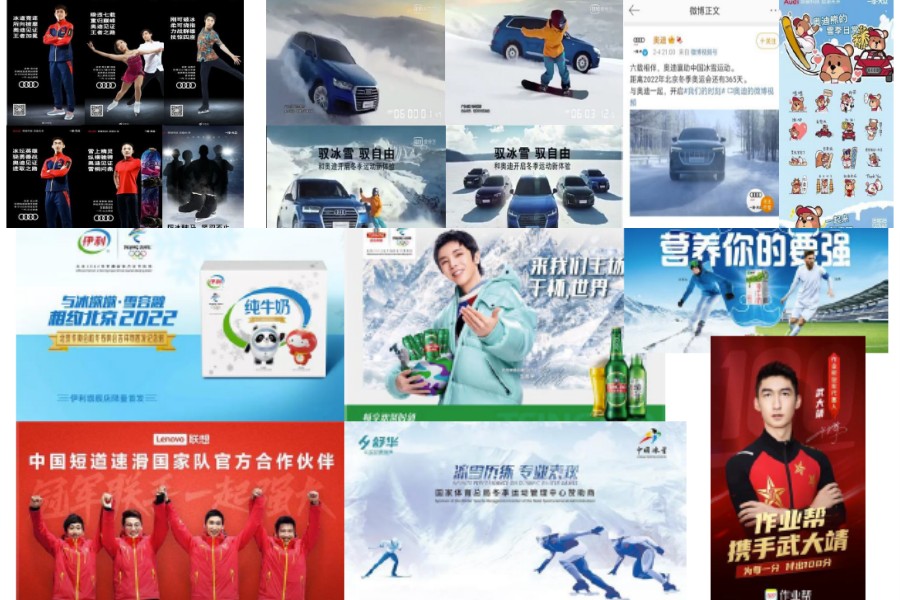 Olympic-themed campaigns in China from Audi (above) and Chinese brands (below). Source: Fuse (OMG)

Then there are sponsorships of specific teams and athletes, where global brands have been more involved, such as Audi’s partnership with China’s skating and skiing teams. Brands like Estee Lauder, Cadillac, Louis Vuitton and Tiffany have joined China Mobile, JD.com and 17 other brands in riding the popularity of Eileen Gu, for whom the Winter Games have become an unqualified marketing success.

No question, there has been Olympic brand activity within China, but it’s a vastly different scenario from the 2008 Summer Games, when sports journalist Mark Dreyer, the author of Sporting Superpower, first came to China and has remained ever since.

Remembering the 2008 Games for its local enthusiasm and party-like atmosphere at what was widely considered to be China’s coming-out party on the world stage, Dreyer says the current scenario in 2022 is completely different. Appearing on the Shanghai Zhan podcast last week, Dreyer described a spate of Covid restrictions and bubbles that athletes and media have to go through to participate in and cover the Games. He also noted the impact of diplomatic boycotts by the US, Canada, UK and other European nations which have very clearly dampened spirits.

“It's just a very, very different vibe,” Dreyer says. “The organizers’ point of view at this point is: ‘Can we just get through it safely?’ I think the International Olympic Committee (IOC) as well, with a lot of the political considerations they've had, these diplomatic boycotts and other issues... they’re just trying to get through it with as [few] incidents as possible. And so, inevitably that affects the mood.”

Marketers preparing for the Olympics may have been feeling something similar. The postponement of the Tokyo 2020 Summer Games (eventually held in 2021) and the unpredictable nature of Covid meant that considerable time was spent sorting out timelines, approvals and logistics instead of having the usual luxury of years of planning to focus on scope and message.

When McCann China first pitched in March 2021 to create a 100-day Olympic countdown film for the Beijing Olympic Committee, the brief was “really simple,” Ma tells Campaign. “There was nothing at all really.” The brief was simply to make the film, but void of instruction on theme or content.

“But that was the hard part, because it was a very uncertain time," Ma explains. "We didn’t even know if the Tokyo Olympics would happen or not. And then along the way there were a lot of tricky relationships with other nations [to consider]—which is still happening—so we had to figure out what the real message should be to tell the world.”

Ultimately, as Tokyo went ahead, the film’s message came to be that China ‘was ready’ to host the Games with facilities prepared and Covid under control, says Ma.

Yet that didn’t make the logistical challenges of shooting the film any easier. By September, Ma explains, the weather was still hot and there was no snow. Many production companies did not feel confident enough to pull the film off and turned him down. After finally securing a good director and crew, they had to set up very high in the mountains to find snow. But there the actors, director, cinematographers and creatives all came down with altitude sickness during the course of the shoot.

BBDO Shanghai relates a similar experience during the production of its Olympic campaign film for Allianz in China called ‘The Strength to Move Forward.’ Their team was almost unable to attend the shoot due to pandemic restrictions in Shanghai. When on location in the upper plateau region, the actors and crew had to overcome altitude sickness—and –26ºC weather—to get the job done.

This was fitting, however, as overcoming obstacles was a key theme of the Allianz film—as it is with many films by Olympic brand sponsors that focus on athletes and their perseverance. But stories like these also reflect how just getting campaigns done became one of the biggest advertiser objectives.

The Olympics, however, simply ooze with universally relatable themes and messages that brands can leverage (dedication, persistence, bravery, support, compassion, strength, endurance). All of these can be politically neutral and culturally inoffensive. As such, it may seem puzzling as to why Allianz has been one of the few official global Olympic sponsors to tap into this opportunity in Beijing. Yet as we've reported, the vast majority are largely staying quiet for these Games, despite investing millions in their Olympic relationships.

The reasons for this are well documented. Western opposition to China’s treatment of Uyghurs in Xinjiang, the reported muzzling of tennis star Peng Shuai and persistent suspicion of China’s anti-democratic government have put cumulative pressure on Olympic sponsors to avoid supporting Beijing itself as they support the Games. These top sponsors, who were called into US Congressional hearings to explain their stances last summer, now find themselves stuck between growing numbers of values-based customers in the West on the one hand, and the more than $110 billion of revenue they generate in China, according to Bloomberg data and US firm Strategy Risks, which measures corporate exposure to China. 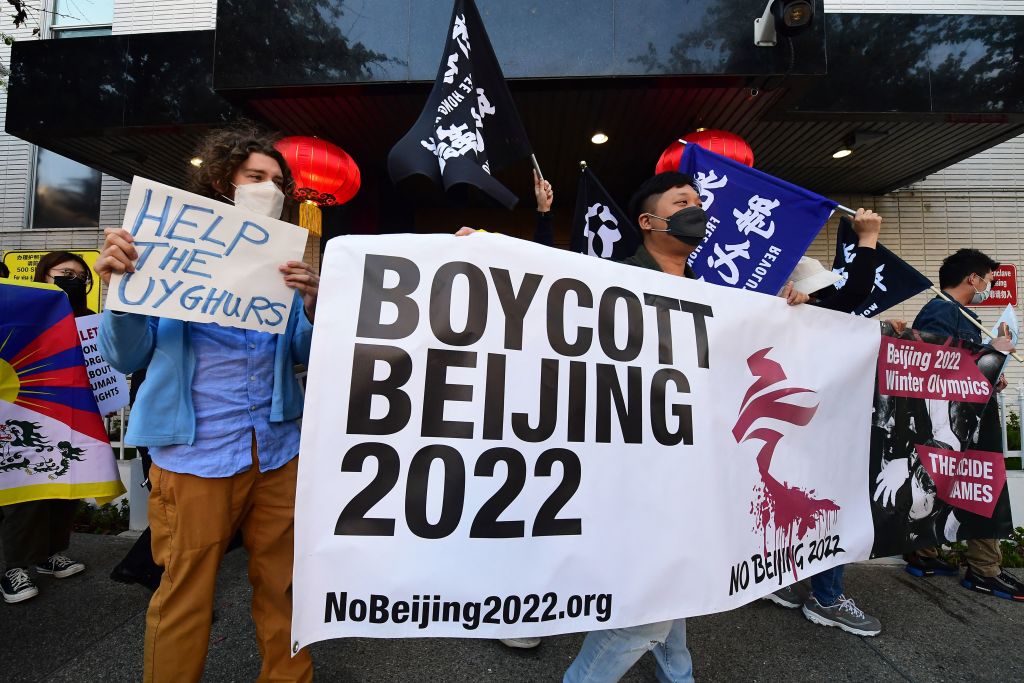 Activists protest against the 2022 Beijing Winter Olympics outside the Consulate of China in Los Angeles, California on February 3, 2022 ©GettyImages

“What you are seeing play out in real time is this very delicate tightrope walk," says Dipanjan Chatterjee, VP and principal analyst at Forrester Research, who writes about brand strategy and social justice. “These sponsors of the Olympics are in a tenuous balancing act where there is too much to be lost by endangering the Chinese opportunity, [but also face] the downside of alienating their domestic audience of values,” he tells Campaign.

Chatterjee says that if China were any less important economically, you might see more Western-based brands taking a stronger stance in support of boycotts. But his own market research suggests consumers' bark is worse than their bite on purpose-led purchasing, with only 18% of consumers ever truly motivated to make purchase decisions based on social values. This too will enter brands’ calculations.

As we’ve seen, some global brands continue to run separate Olympic campaigns in China. But these days, those brands need to be much more careful in depicting who or what they are supporting.

“We’re in a more global world now," says Dreyer. "So what you do in one market is closely watched by viewers overseas. So it's not like you can have a big happy campaign within China and no one overseas notices. Those days are long gone, and that has really affected what some of the big brands are doing.”

So as much as global sponsors might wish to create neutral, inoffensive global Olympic campaigns, they may have discovered in the process that the risks were still too high.

“When PR teams and marketing teams are sitting around wondering how to plan a campaign, they might get hammered from this side and they might get hammered from the other side,” says Dreyer. “So the answer, basically, is to not do anything. There’s been too many examples where brands have been burned both in China and overseas, just over the last six to 12 months, that the default more and more is becoming: ‘Okay, let’s just lie low'.”

It’s important to note that this is not a completely unique situation. Politics has always become intertwined with the Olympics and boycotts throughout its history, albeit never paired with a global pandemic. From the IOC's perspective, this storm will pass.

Chatterjee maintains the amateur nature of the Olympics will always allow it to retain a special universal appeal for audiences and brands alike. In the Olympics, one rarely cheers for overpaid superstar athletes like in the world of professional sports, aside from a few sponsorship darlings like Eileen Gu. 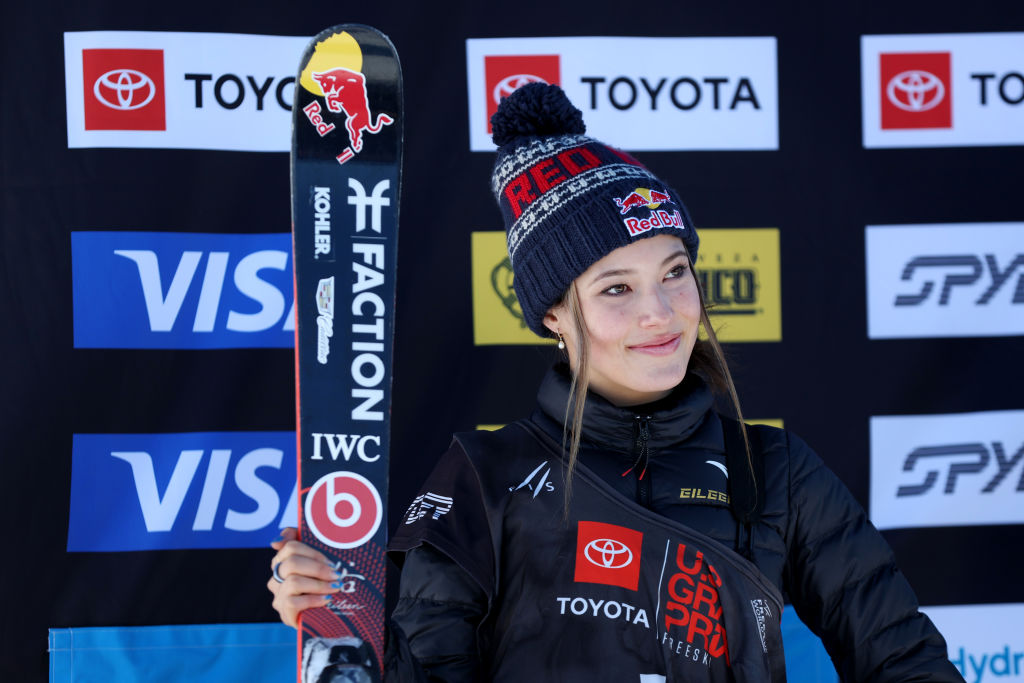 “[The Games are] about the everyday man and woman rising above their limitations and challenges to claim victory,” Chatterjee says. “That is something very appealing. In the world of brands that relatability is super important. So the equity of the Olympics is very different and it endures.”

In some respects, Tokyo 2020 and Beijing 2022, then, are taking global audiences back to the Olympics’ earlier roots, with the ability to watch a more brand-free version of the Games. This could give both brands and organisers a chance to pause and consider the good and the bad of Olympic marketing and sponsorhip in the future.

For now though, both appear content to simply get through these Games unscathed with minimal damage control necessary.

Web (online only story, NOT from printed publication)

Pick of the Week: Give the BBC’s mesmerising Winter Olympics film all the gold medals

BBC warms up for Winter Olympics in icy spot, but no mention of China

Global adspend to grow 9.2% powered by Olympics, World Cup and US mid-terms