With the blessing of the Chinese government, the China American Football League promises a branding bonanza for global companies

HONG KONG AND NEW YORK — In an innovative deal with U.S. backers, China has opened its doors to a new American-style arena football league — and that puts opportunities in play for brands on both sides of the Pacific.

The China American Football League (CAFL), which kicks off its debut season in fall 2015, marks the first commercially backed professional sports league in China, according to Gary R. Morris, CEO of the CAFL. This is a big step, Morris explained, because all the others, including the country’s highly successful basketball league, are structured as state-owned enterprises.

League chairman Martin Judge, who also shares ownership of the U.S. Arena Football League’s Philadelphia Soul, founded the CAFL. He and Morris started laying the groundwork for the league about three years ago. While Morris resides largely in Shanghai and Judge in the United States, league headquarters are in Beijing.

To support the launch on the U.S .side of the Pacific, the league has retained Ari Fleischer Sports Communications, the PR agency headed by the former Bush administration press secretary.

"There are some familiar suspects here in the United States," Flesicher said. "A lot of successful corporations doing business for many years in China also understand football."

A Spalding banner on the CAFL home page hints broadly at one sponsor, although Morris said a relationship with the Bowling Green, Ky., sports equipment giant is not yet official.

As for bringing Chinese brands into the football fold, Fleischer acknowledged a learning curve about the American sport. However, he said, a number of factors add momentum: "Having the sponsorship of the Chinese government is a game-changer in China."

Morris also indicated the relationship with China’s sports ministry is close and the government body is ready to do what it takes to ensure the success of the CAFL, including great logistical support. The first commercially backed sports league in the country could become a blueprint for the future if successful.

Every major city in the country has large sports arenas, and football games represent a chance to use these venues to create jobs and leisure opportunities for local residents. At least for the time being, you will not see any of the wrangling over arena funding that so often ties up team deals in American sports. The venues are all there waiting to be used.

Fleischer predicted an eager local audience and sponsors. "Sports are ancient to China, and the Chinese take tremendous pride in their competitions. Chinese companies might not know how to run a screen pass, but they understand the revenue potential for a new competitive league.

"It’s exciting to see how a new market can be tapped for a wonderful old American sport."

Privately owned professional teams will debut next year, the CAFL’s Morris told Campaign, representing six to eight first-tier cities including Shanghai, Guangzhou and Beijing. Players will comprise a 50/50 mix of foreign and local talent. Each team will handle its own marketing; ownership of individual teams (still under negotiation) will probably be a mix of corporations and individuals.

While Morris declined to specify TV deals in the works for CAFL, he said the league has been in discussions with one well-known, sports-only network. "You might be able to guess which one that is," he said. Promotional plans for 2015 include extensive social media as well as TV advertising.

Fleischer said the league is taking a deliberate approach to building interest in CAFL football on Chinese social media such as Weibo. "When you look at other sports in China, tennis for example, social media is massive," he said. "It’s too soon for that to happen for Chinese football — it won’t develop personalities and relationships with players" until team lineups announce in winter and spring 2015. 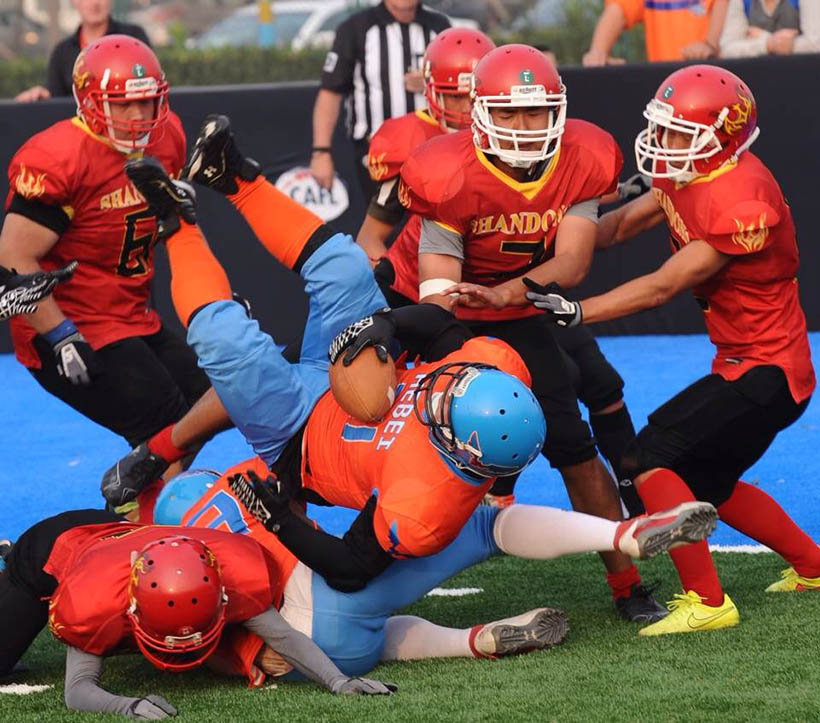 The CAFL wants to build the same kind of feeder system US colleges provide to professional teams, so this year the CAFL has been supporting games at Chinese universities. Local rugby leagues will also be a source for talent. Referees will likely all be foreign at the start, but Morris emphasized the aim is to shift to an entirely homegrown talent pool for all aspects of the game.

Morris said the game’s closeness to fans was another factor in favor of arena-style football. "Fans sit right along the court walls (it’s like a hockey rink), and can see the players’ eyes. Game balls will also fly off into the crowd and fans can keep those. And with the music and lights, the whole thing becomes a very exciting event." Morris said crowd engagement at an exhibition game the league held earlier in the year in Beijing in front of 10,000 spectators closely resembled the intensity of the popular, state-owned Chinese Basketball League.

While transplanting a rough, American-style sport may seem like an uphill battle, Morris said he is optimistic. He sees great enthusiasm from players, both local and foreign, and believes relationships are strong and all the necessary support is in place. Now it's just a matter of getting the fans to come around. And that's where the marketing starts.

Morris said the CAFL would start its campaign to build public demand in early 2015. Campaign Asia-Pacific contacted some sports-marketing firms in China and the APAC region but none had yet heard of the league.

Fleischer said the CAFL has also been in close contact with the NFL about the commercial prospects of transforming American football into a truly international sport. "While this is not a carbon copy of the NFL, anywhere American football goes is good for everyone."

Heineken bets on the US catching soccer fever