JetBlue wants to do for overscheduling what "An Inconvenient Truth" did for global warming. And the airline thinks it’s got just the movie to do it.

"HumanKinda" is a 10-minute documentary-style film — created in conjunction with Mullen Lowe — that explores the effects that constant busyness is having on the lives of young people. 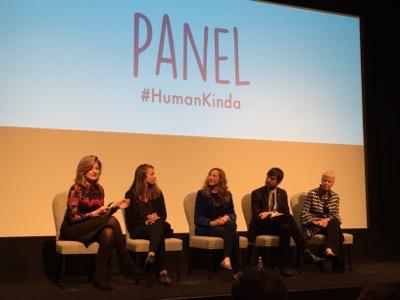 The film, screened at a SoHo event Tuesday night that included a panel discussion moderated by Arianna Huffington, features comedian Sam Richardson as he follows two busy people — a 20-something man juggling several jobs and a working mother — to see if he can help save them from their frenetic lives. Showing the two spending so much of their time checking emails, texts, and on the run, the short poses the question whether everyone is slowly losing their humanity and becoming "HumanKinda."

The hope is to spark a widespread conversation about the increasing need to slow down and book a vacation. (Maybe with JetBlue?) The airline has compared the film to such cultural touchstones as "An Inconvenient Truth" and "Food Inc.," which helped fuel a national backlash against processed food and meat.

"We wanted to create something big, and we thought about other films that have changed the way people think about things – ‘Food Inc.’ and ‘An Inconvenient Truth’ – those films created a tipping point," said Nick Mathisen, associate creative director at Mullen Lowe. "We aspired to create something that would create a tipping point on busyness and start to effect change and draw attention to this busyness epidemic and the compulsive need to be busy." 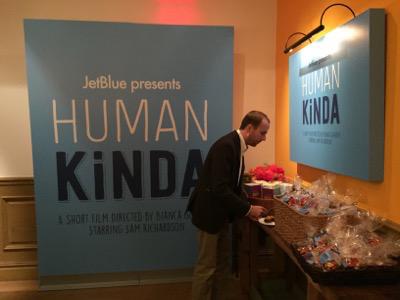 JetBlue’s first short film, making its debut online today on Yahoo! and Tumblr, focuses on the "emotional side of why consumers would want to fly," said Phillip Ma, manager advertising and content for JetBlue. "We’re looking at this as a campaign on human kindness."

The film encourages viewers to "slow down and put yourself first, and not send those hundred emails," said Lisa Mathisen, associate creative director at Mullen Lowe (and married to Nick). "Take a few days for yourself and take a vacation."

Though branding in the film is subtle, JetBlue planes make several appearances, such as when Richardson flies to New York and Washington, D.C., to follow his two subjects. "The film is an experiment," Nick Mathisen said. "We have these two test subjects who are real people, and we don’t know which way the story is going to turn, or if their busyness is going to be cured. It’s not your typical documentary."

The short is being advertised in cinemas with a minute-long trailer. Additional content will include video and content from Yahoo social influencers and Tumblr artists as well as custom integration on ABC’s "Jimmy Kimmel Live." The video will also be promoted across JetBlue social platforms like Facebook, Twitter and Tumblr.

Why climate change is our most important creative brief

Tumblr promised Millennials on a plate, so why didn't brands bite?

How Mother helped the 76ers revolutionize their brand

What marketing predictions did 'Back to the Future Part II' get right?

JetBlue 'A Taste of Home' by Mullen Boston

JetBlue 'Fly It Forward' by Mullen