Monday: Characterised at BR Towers by crisp spring sunshine, conversations about Brazilian carnival and lots of tech chat. Here are the five things you really need to know.

Interestingly, there is no sniff of the cool, hip and young crowd whose members include Twitter, Vine, Airbnb and Uber. The youngest brand in the list is 17-year-old Google.

Those surveyed clearly prefer the trusty Philip Schofields of the branding world over the Cara Delevingnes.

Mahoney is looking for other opportunities within and outside the WPP network, which owns RKCR/Y&R, as well as the possibility of setting up a start-up. "At some point in everyone’s career, it’s worth stopping and rebooting, and, fortunately, I have the luxury of being able to do that," he said.

No doubt he’ll be looking for somewhere that isn’t such an utter nightmare to pronounce.

On social: "If you don’t have a cause, get one"

This tweet caught my eye during today’s daily morning Twitter inhalation. Salesforce’s Jeremy Waite tweeted a cartoon by Gaping Void founder Hugh MacLeod featuring a note to brands from Arianna Huffington (both of whom, incidentally, I admire greatly). It read: "If you don’t have a cause, get one." 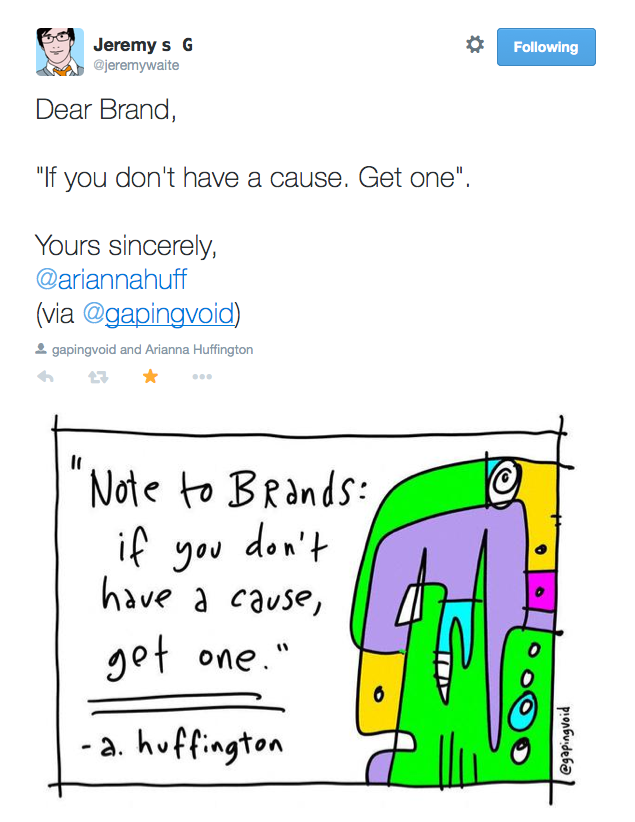 For me, this message sums up the 2015 zeitgeist for brands: if you don’t have a purpose, you might as well give up and go home.

Friday's lesson? We should all be more unprofessional