From pop-ups on rooftops, inside warehouses and in subterranean gardens to food markets celebrating different cultures and bespoke festivals, food and drink-themed brand experiences are becoming a staple of London's restaurant and bar scene.

When it comes to promoting food and drink, sampling has long been seen as the traditional route to getting a consumer to taste a product. Sampling methods, however, have being transformed in recent years, evolving into full-scaled bespoke, branded experiences.

"Sampling is incredibly important but we believe that we need to constantly review how we do it in order to stand out and remain front of mind," says Kenny Hyslop, head of experiential at Pernod Ricard, which counts brands such as Campo Viejo, Brancott Estate, Malibu and Chivas among its portfolio. "We enjoy getting creative but are always mindful of the fact that different executions need to be tailored to different drinkers."

Hyslop says Pernod Ricard's recent work with Malibu at Ibiza Rocks is a great example of how the brand executes sampling in a creative way that works for its target audience. "We created an environment for Malibu drinkers that mirrored the #becausesummer campaign and encouraged social media content creation and engagement. For our whisky drinkers we’d obviously behave differently."

London has witnessed an explosion in foodie and drink activations in recent months, with experiences including French liqueur brand Chambord’s pop-up pub, Le Crown and Cactus, which opened in July. It featured games hosted in a garden and the chance to personalise cocktails and feast on pub snacks. Peroni Ambra’s Somerset House Terrace, running from April until September, is themed around the orchards of north west Italy, offering a bespoke cicchetti menu and cocktails. 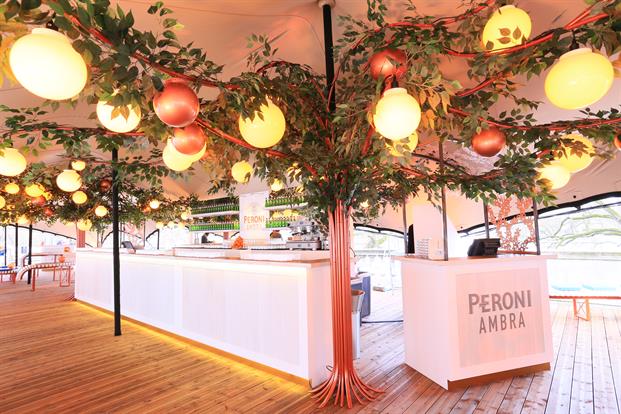 Bacardi-owned brand Bombay Sapphire meanwhile revived ‘The Grand Journey’ in July, an immersive drinking and dining event - complete with gin train, the Laverstoke Express. It took diners on a trip around the world to explore the locations where each of Bombay Sapphire’s ten botanicals are sourced. Guests were also treated to dishes from Michelin-starred chef Tom Sellers. 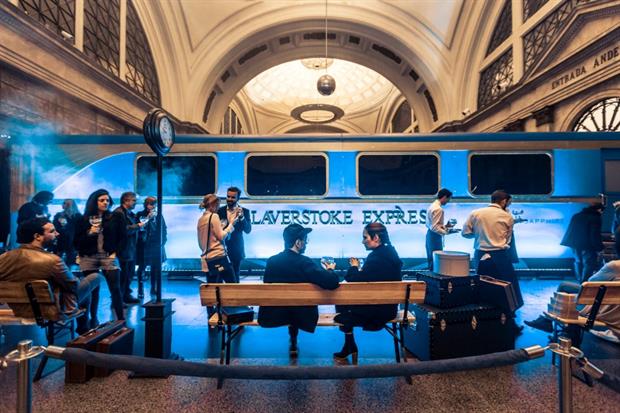 Deborah Kelly, head of UK sales at London & Partners, the Mayor’s official promotional agency and convention bureau for the city, says that with increased competition in the food and drink industry, it is crucial for brands to get closer to their consumers if they’re going to make a lasting impression.

"This is why we are seeing an increasing number of moveable food and beverage experiences, with brands going ‘on tour’ to reach more consumers," she says.

One of the latest experiences to grace the capital is Campari Creates. The Italian aperitif brand is recreating the spirit of Milan's Navigli canal by inviting guests to take part in a series of masterclasses aboard a narrowboat. The two-week activation in Kings Cross in September will also form part of Design Junction, an exhibition for contemporary interior design and culture, itself timed to coincide with London Design Festival.

Nick Williamson, marketing director at Campari UK, believes that full-scale brand experiences such as Campari Creates give the brand the opportunity to really bring to life its values and history in a more profound way than is possible at a sampling event.  The activation aims to showcase how Campari has been a muse to creativity of all kinds – from cocktails to works of art – since its foundation.

"In the case of Campari, we have over 150 years of history to communicate – everything from our work with amazing artists to our cocktail development story – so a full-scale brand experience gives consumers the opportunity to get truly immersed in our brand and discover this rich legacy," he says.

Williamson believes branded pop-ups and bespoke drinks experiences are not so much challenging London’s restaurant and bar scene - rather, they have a complementary part to play.

It's a view shared by Pernod Ricard UK's Hyslop. "Pop-ups have been around years, they haven’t appeared overnight, and we work harmoniously with the on and off trade to ensure our activations ‘close the loop’ and drive customers back into trade," he says.  When we launched Chivas The Blend last year, for example, we were selling tickets to an experience but ultimately, if they’re not going to go back into store to purchase a bottle or order a dram at the bar, we have failed."

Similarly, explains Hyslop, the brand placed its recent Campo Viejo Fiesta de Color pop-up bar right next to Waterloo Station to drive footfall, but it was also right next to key customers, so it could direct people to these venues once it closed its bar for the evening.

"Pop-ups work well because of this," adds Hyslop. "They provide consumers with something cool and different to keep them excited about products or brands, but the objective remains to continue supporting the trade by getting more people buying into our products for a long time after the activation has run."

Bruce Burnett is CEO and founder of experiential agency i2i Marketing, which has worked on campaigns for brands including Cointreau and Emmi. Burnett says that with consumers interacting with brand campaigns in a much more selective way, there’s more pressure than ever to create truly compelling narratives around the products they consume. He cites Coca Cola’s biggest ever sampling campaign in Australia this summer as one example of this. Two million samples of the new Coca Cola No Sugar (Coca Cola Zero Sugar in other markets) were distributed across the country, with the brand partnering with ride-sharing service Go-Catch to offer bottles to consumers for their journeys, while a launch event around the drink featuring singer Kelly Rowland was also staged.

"When it comes to the drinks industry, being able to taste a product is paramount to its success, in conjunction with other marketing and advertising methods," he says. "This is largely because tasting a product de-risks it – meaning consumers won’t be taking a gamble by switching from their trusted brand or trying a new range," adds Burnett.

i2i Marketing worked with Emmi to launch the Caffe Latte iced coffee drinks product, with the aim of raising the profile of a low awareness brand. Emmi wanted to capture the imaginations of passers-by with the creation of a bespoke mobile café from where free samples were handed out. The sampling initiative helped lift the product’s sales by 693% in Tesco stores.

Brands are also using pop-ups and branded activations to bring current trends in the food and drink sector to life or to offer consumers a taste of something special. London & Partners' Kelly says there are a lot of high-end dining experiences becoming more and more accessible to consumers.

"For example, London was the first UK destination to host 'Dine in the Sky' where the best restaurants transfer their menus to a table suspended 100 feet in the air," she says. "All those new trends are fantastic because they allow London to remain an exciting destination for visitors, with new bars and restaurants constantly opening."

Molson Coors owned-brand Cobra, meanwhile, worked with agency Sense to create a 'Flavour Room and Bar' for the Night Market in Kensington Palace Gardens in June, in part to raise awareness around matching beer with food. The activation invited guests to explore the smooth and complex flavours of Cobra alongside a fusion menu curated by Gary Maclean, MasterChef: The Professionals Champion 2016. There was also the chance to enter an immersive upstairs beer and food matching experience. 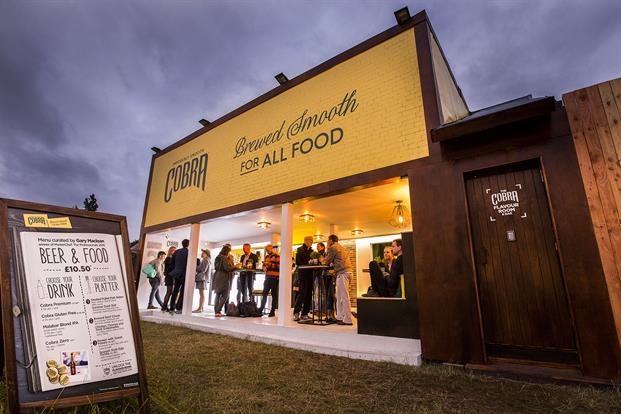 Speaking about the activation, Rob Hollis, head of World Beers Portfolio at Molson Coors said that the demand for beers that pair well with food has never been higher. "Gary’s fusion menu will demonstrate just how versatile Cobra is as the perfect partner to a huge range of different cuisines from around the world."

i2i Marketing's Burnett believes that while experiential is often reserved for new products, it can also work well for established brands that are being taken for granted and have fallen out of a person’s repertoire.

"Consider that people often forget a product’s great qualities and may need a reminder," he says. "This was the case with Cointreau. We created and installed an outdoor Cointreau Fizz bar in the gardens of 50 style bars in London, offering free cocktails and nibbles. The campaign encouraged drinkers to reconsider the brand resulting in a significant increase in sales. It’s important to bear in mind that experiential can be a highly effective tool in changing consumer behaviour, especially if it’s used as an integral part of the mix."

How Fanta elevated Halloween with its '13th floor' VR experience