Bodyform/Libresse from Essity is a femcare brand with a global presence but it is a challenger brand in many markets. In the UK, it is number three behind the giants Always and Tampax from Procter & Gamble.

Not only did P&G keep outspending Bodyform, it had been increasing its investment year on year and Always was advertising almost all year round.

As a challenger in a commoditised category, we couldn’t afford to compete on price and promotions or to outspend our competitors.

A few years ago, we started building a brand platform – "Live fearless" – to help women live the lives they want by breaking period taboos.

In a society that is still deeply stigmatising periods – and in a category surprisingly afraid of menstruation and, thereby, participating in the shame – we wanted to play a bigger role than pouring more blue liquid on to sanitary products and a more relevant role than tackling societal issues that seemed important but were unrelated to periods.

Despite not being the category leader, we wanted Bodyform to be a lighthouse brand, taking risks first and using scale to help shift attitudes.

In 2016 we released "Red.fit". In this award-winning campaign, we created a powerful, taboo-breaking film that showed women bleeding while engaging in activities such as boxing, running and ballet – a first in femcare advertising.

And we provided muchneeded myth-busting content to support and inform women so they could keep active during their periods. The campaign’s outstandingly positive reception emboldened us (and the client) to keep pushing even harder against taboos.

All our research showed evidence that almost everything around periods was problematic. Periods are, of course, the most normal thing in the world. But in 2017, they were still seen and experienced as everything but normal.

With Bodyform/Libresse, we commissioned global research. The results were profoundly sad and universal:

By digging deeper into the manifestations and consequences of the taboos, we found a powerful insight that enabled us to tackle the root cause of the stigma.

In 2017, there was still a glaring absence of representations of periods in the media and mainstream culture. And this was fuelling the toxic shame. 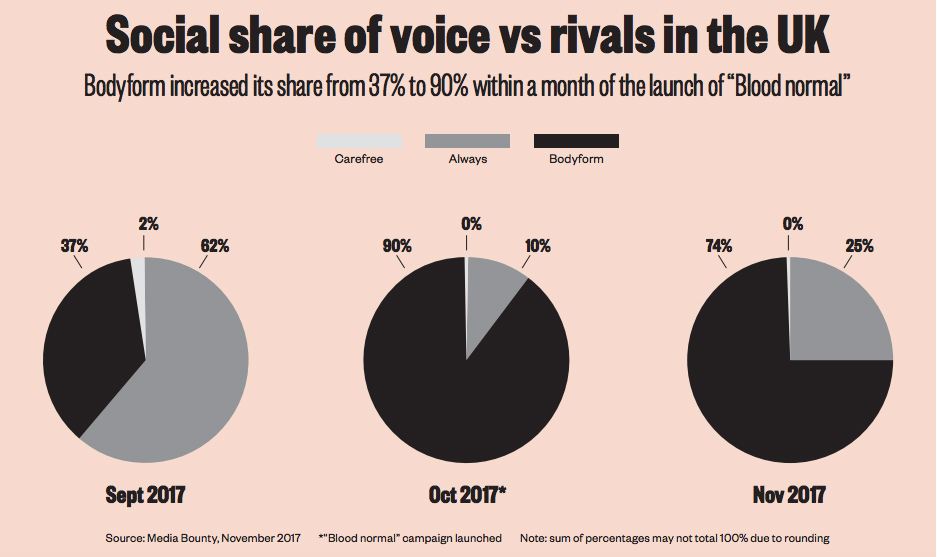 You can’t be what you can’t see

Representation is the key to everything. It shapes what we think is normal and acceptable and what we find taboo. In culture, we find blood acceptable. It’s not shocking to see blood in coverage of live sport. Or in crime series. Or horror films. You see it all the time in video games and graphic novels.

And the period advertising category has played its part, too. For decades,those who created the ads were afraid to even use the word "period" in them. They invented the blue liquid – the ultimate symbol of euphemised shame.

With "Blood normal" we wanted to make a historical correction. We wanted to do what no other brand had been brave enough to do before.

We envisioned a campaign that would have a film at its heart, but out of that film would explode real-world activations that could ripple through culture and change it.

Our idea was not hinged on the blood. Our idea was to create a new, unashamed normal. And once you start asking questions about the representation of periods – and how abnormally they are treated – you begin to see how pervasive the stigma and the taboo are. And you become determined to shine a light into all the dark corners.

And for every challenge, we would provide an answer. Why do we treat pads and tampons like a Class A drug? We would show women asking for them normally in mixed company.

Why can’t they get the pop-culture treatment? We’d make giant, inflatable sanitary-pad-shaped lilos (try hiding that up your sleeve). Why should periods only be a woman’s issue, when period shame is everyone’s problem?

So we included men casually buying and passing on sanitary pads. Why are most period jokes cruel and misogynistic?

We would get a 12-year-old comic to write normal jokes and incorporate them into her routine. Why can’t periods be beautiful? We would create embroidered period underwear in collaboration with French fashion designers Dessù (pictured).

Why do we never acknowledge period pain? Almost every woman can confirm: periods can be fucking painful. Why is period sex so totally taboo? We’d make intimacy at that time of the month something normal, not disgusting.

And, yes, why is it only period blood that is depicted as a weird, abnormal, watery blue? And why can’t periods enjoy the normal right of every other type of blood to be shown as they are – in all their red glory?

It was very ambitious but we knew that if all of this was coming from a mainstream brand, our voice and idea would be magnified and move from the margins to the centre ground.

Well that was the dream. And while we knew the campaign was pushing boundaries, we were hopeful that the broadcasting authorities would be ready to take this step with us.

God, were we wrong.

Across all platforms (TV and online) we faced a big, visceral "no". Some of the film’s scenes we would never have imagined might be banned were: the designer underwear, the kiss, the shower scene. The authorities used words like "gone too far" and "offensive" to describe the scenes.

And, of course, there was an absolute rejection of the blood on the pad. It was clear to us that the stigma of periods and period blood was so deep-seated that it was clouding the authorities’ judgment.

When you see the other ads that feature far more provocative scenes of women (in scanty underwear, shagging in showers) and portray them in all sorts of deeply objectifying and sexualising ways, it was clear we had touched a raw nerve of prejudice.

With so many cuts demanded, we really were left with the choice of binning all our work or diluting it to the point of meaninglessness.

It was game over

Our client, Martina,told us she was going to lose her job. But then she swiftly followed this with: "Let’s do it anyway."

Our other client, Tanja, said: "The systematic rejection made all of us so angry that we became even more determined to get ‘Blood normal’ out there."

So we decided to do some creative judo. If they were trying to silence us, we’d use their force of rejection against itself. We would incorporate the ban into our film, to make our voice even louder, to highlight the almost melancholic and bitter truth – that what we thought was normal and beautiful was still regarded as anything but.

And these tactics, combined with the sheer bravery and resilience of our team and clients – all lobbying the internal stakeholders and media owners like a team of Erin Brockovichs on steroids – allowed us to get an even better campaign out into the world.

So what happened next?

When we finally launched online, there was an immediate outpouring of praise and goodwill. Women across the globe were saying "thank you" and "thank fuck" in all languages.

They were not only commenting online but also reaching out to us personally, and to our client, to express how this campaign was changing things profoundly and how they finally felt understood.

The campaign gained extensive publicity; we had the greatest share of social voice (it increased from 35% to 90% against Always and Carefree); we started trending on Twitter; and positivity around our message (even though we knew the campaign was polarising) was more than 70%.

And, ironically, we started getting on to the very television stations we were originally banned from, proving how relevant and crucial our campaign was.

Men and women have started creating their own "Blood normal" positive iconography (some of which we’ve integrated into our campaign). The rest of our campaign continues to spread into culture. Our embroidered Dessù underwear was sold online – and Dessù is now praised in France as the thought-leader of lingerie – a post-#MeToo brand that doesn’t sexualise women.

Our pad-shaped lilos are beginning to pop up on beaches around the world, providing playful positive imagery on social media. We ran a bursary for young filmmakers to encourage them to depict periods in their films as something normal – and three films are being produced.

Saffron, our 12-year-old comic, is busy performing period jokes in her routine. And we have even used some of the hateful comments we’ve received – and there were a lot of them – to create new content, juxtaposing the hatred with positive imagery, proving again why our campaign is needed.

"Blood normal" has not just changed people’s attitudes and culture, it has changed a company - Essity has discovered how brave it can be. After the launch of "Blood normal", many employees, even from supposed conservative markets, contacted the global client to praise the campaign.

And 94% of Essity femcare employees, across all functions beyond marketing, said they felt proud to work for the brand.

More markets are launching "Blood normal" and Latin American markets, where the campaign has not yet run, have vowed never again to use blue liquid.

It has strengthened the Bodyform/Libresse brand, giving it a disproportionately high share of voice that we could not afford to pay for. With a limited investment compared with the spending power of P&G, we punched above our weight with a media ROI above 13.

But "Blood normal" also made more women think highly of our brand: 60% of recallers had a better opinion of the brand and more than two-thirds of women wanted to buy the brand after seeing the ad (according to Ipsos in November 2017). We have changed a category forever.

A door has been opened that can never be closed – good luck to any brand that still wants to use blue liquid. In several countries, people and journalists have publicly asked competitors to follow suit. And some already have.

But, most importantly, we’ve changed minds and overturned a ban. In France, where the TV authorities rejected the campaign last year, we got back to them with the proof of its success among consumers.

We asked whether they would change their minds and overturn their ban of our film. And they’ve said yes. For us, "Blood normal" isn’t just a campaign designed to show periods in a new, truthful way. It’s the courage to make periods normal in a category historically petrified by the very notion of menstruation.

Margaux Revol is a senior strategist and Nicholas Hulley and Nadja Lossgott are creative partners at Abbott Mead Vickers BBDO. 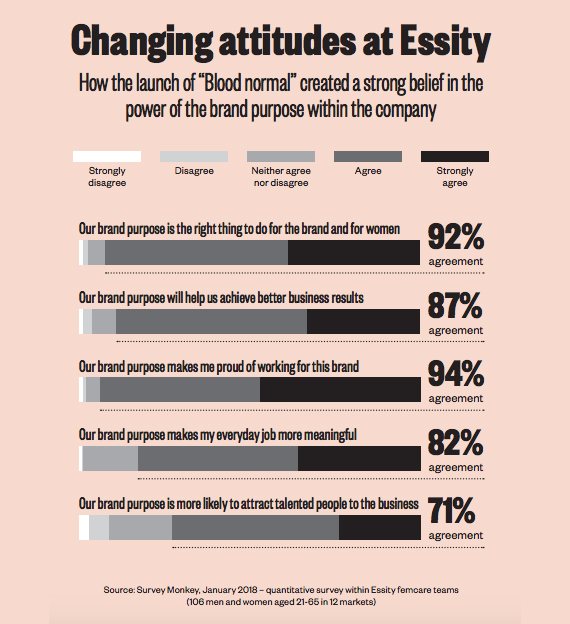 From vulvas to Whoppers: the world's most-awarded campaigns in 2019

In praise of the vulva: Bodyform and AMV used creativity to subvert shame

Pick of the week: Bodyform and Libresse take a bold step in smashing taboos

Blood is the new normal: Why Bodyform and Libresse took a marketing risk for a campaign about periods

Why this dad wanted to make an ad about period blood