Positive progress has been made when it comes to BAME representation in mainstream advertising and, to a degree, within the industry. But there remains a long way to go, with plenty of cultural and structural change needed, before either becomes entirely colour blind.

Black History Month throws the representation of people of colour in mainstream advertising into sharp focus. It’s an issue that has only relatively recently started to be addressed.

In fact, some trace the more inclusive climate to winter 2017 when a notable spate of multi-ethnic actors were cast for many of the big Christmas ads. This uptick in black representation could have been inspired in part by the #ChristmasSoWhite campaign of 2016, for which advertising consultant Nadya Powell created a stock-image bank of black and ethnic minority families enjoying the festive period.

The "Food love stories" campaign created by Bartle Bogle Hegarty for Tesco and the multi-award-winning Nike ads "Nothing beats a Londoner", by Wieden & Kennedy London, are now celebrated as representations of our more diverse society, but both are recent work, having launched only in 2018. In general, ads from an earlier era either favoured invisibility for people of colour or played to stereotypes. The Advertising Standards Authority is well aware of the lazy stereotyping that can creep into campaigns and since 2013 has had guidelines in place to end offensive racial clichés that sometimes previously made it through the sign-off process.

Robinson says: "That ad was part of a series that all used the same concept of placards with the wrong lyrics of famous songs. They were very funny, and the one using the reggae song really stood out for me. Having said that, the ad used a track that was a touchstone of Caribbean culture. We actually didn’t get ads that featured black people as part of non-specific UK culture for many years."

In the US, the representation of people of colour is more complex, with  a longer history. Dino Myers-Lamptey, former managing director of MullenLowe Mediahub UK and founder of TBS, says: "To gain a clearer picture of what’s happening in the UK, we’re going to have to exclude all those US ads. And the British ones featuring celebrities – sorry, Lenny Henry – and sports and entertainments stars, too. Once we’ve stripped those back, to be honest, I think the first time we see black people featured in a non-tokenistic way is in the Halifax ads featuring Howard Brown, which were launched in 2000."

Anna Arnell, creative partner at And Rising, says: "I would love to see more black and minority ethnic people come forward for comedy roles. Just like in any other industry, finding the best people is about nurturing fresh diverse talent."

Both Arnell and Robinson agree that casting directors tend to stick to the same talent agencies. Robinson says: "The casting agents don’t go to the black clubs to find original talent. People need to start getting out of their comfort zone, and the industry needs to stop being so complacent."

Arnell worked on a series of choreographed Christmas 2016 ads for House of Fraser, where many of the dancers were from the BAME community. "I remember scrolling down through the YouTube comments and being horrified at the most outrageously racist comments people were leaving. It’s really saddening that although more black and minority ethnic people are being cast in ads than ever before, many people at home are freely spewing their racist reactions out into the world," she says.

In Myers-Lamptey’s experience, ad agency processes and internal structures can be problematic. He says: "I’m amazed at the rigidity of people’s roles within some of the larger agencies. In an ideal creative climate, everyone involved in the production of a campaign should be able to offer constructive criticism. But for a critical stance to be available to everyone, the workplace needs to offer its employees psychological safety."

Such psychological safety is not always attainable for BAME employees within the industry. Many have self-reported feelings of performance-based anxiety due to encountering microaggression in the workplace. "There aren’t enough black and other minority ethnic people at a senior level who feel able to intervene," Myers-Lamptey continues.

The discourse surrounding black people in British ads cannot be viewed separately from the wider representation issues at play. Kym Oliver, co-founder of YouTube channel The Triple Cripples, faces a triple-whammy of under-representation – she’s black, female and a wheelchair user. When asked about the award-winning Maltesers "Look on the light side of disability" ad by Abbott Mead Vickers BBDO, which features a Caucasian woman in a wheelchair discussing her new boyfriend with two of her friends,  she was shocked to learn that it was on the ASA’s "Top 10 most complained about adverts" lists in both 2016 and 2017, because it centred on a disabled women’s sexuality.

Elsewhere, Oliver welcomes Joint London’s RNIB-approved ad for Amazon Alexa, which broke this September and features a black woman and her assistance dog.

Nene Parsotam, co-founder of Vine Creatives, acknowledges the fact that the industry is making progress. "It’s now not only easier and more acceptable to have people of colour in your ads, it’s expected," she says. "If you release an ad that only features Caucasian people, everyone takes to Twitter to directly criticise the brand. This is a good thing. The issue for me is that there aren’t enough people of colour in the creative departments working on the current crop of campaigns. When you see brands come out with really tone-deaf work, like the recent "#KnifeFree" chicken box campaign, you can tell that there weren’t any people who fully understand this particular issue in the room being listened to."

In the beauty sector, brands quickly come under fire, too, if they don’t cater to a wide range of skin tones. The launch of Rihanna’s Fenty Beauty brand brought 40 foundation shades to the market, which has dramatically raised the bar for other brands. It has since expanded to 50, and its marketing materials often line-up the models via shade-based, rather than ethnicity-based, criteria.

Laura Smith, managing editor at Speak Media, says: "Blackness is having a moment, with editorial and commercial brands falling over themselves to get some ‘black girl magic’ for themselves. But it’s still rare for them to feature women – and it is usually women – with darker skin, kinkier hair or more typically black features or bodies. Whether they’re aware of it or not, colourism is rife: light skin, light eyes, and so-called ‘good’ – for which read mixed-race – hair are still the Holy Grail.

"Even where brown or black women do feature in campaigns, they’re often not the main focus, but the peripheral sidekick. A recent campaign by the make-up brand Glossier was refreshing. Advertising its new foundation with a huge range of women and men with different skin colours, it put those with the darkest skin first and those with the lightest last, something you rarely see."

Geoff Chang, brand journalist at eight&four, notes that people of Southeast Asian heritage often fail to get a look in when it comes to ads outside the fashion sector. He says: "Dr Martens’ ‘Tough as you’ puts diversity and empowerment at its core. I love that the creative individuals it has chosen for the campaign personify the brand’s values – from its long-standing punk attitude down to the physical robustness of its very shoes."

He adds: "Dr Martens has always attracted the rebellious type and, for the time being at least, to champion diversity is to be a rebel."

While progress has been made, there is clearly more to be done. Challenging entrenched structural inequalities can be successful only when viewed as a long-term cultural project – only then we will see colour-blind campaigns that are both empathetic and engaging. 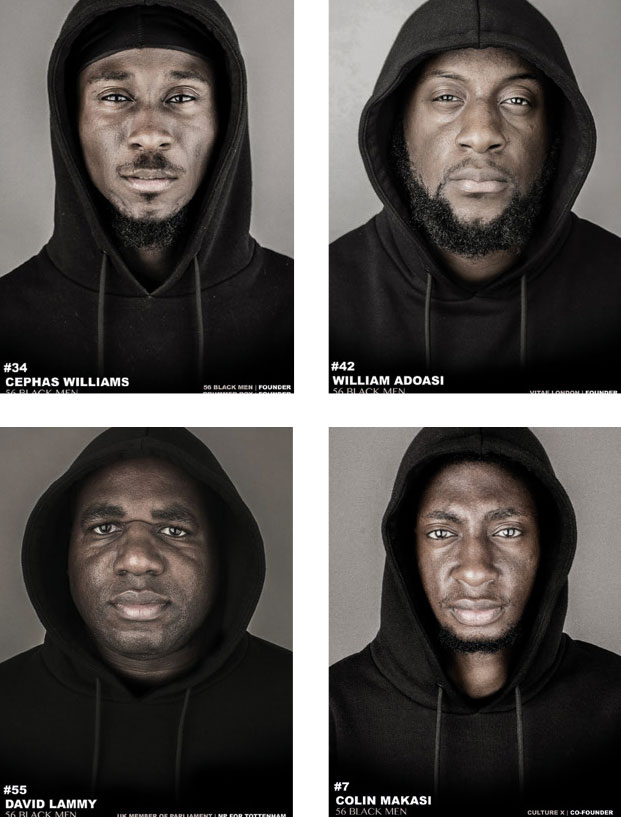 The "56 black men" project, launched in 2018 by photographer and creative Cephas Williams, seeks to challenge the stereotype of "the black man" and the negative connotations attached to the cliché image of a black man wearing a hoody.

Williams decided to highlight the positive achievements of everyday black men, to counter the negativity so often seen in the media – where black men are often mentioned only as murder victims or suspects.

The number 56 is not arbitrary. It is a figure taken from a Sky News report, which detailed the number of black people who were murdered in 2018.

The campaign makes a visually bold statement by showing each man wearing a hoody, alongside copy listing their job and accompanied by the tagline: "I am not my stereotype."

It features men from a range of professions including the worlds of finance, arts, business, medicine and politics.

The work gained substantial press coverage, and in February 2019, David Lammy, the Labour MP for Tottenham, went public with his involvement, writing a piece for The Guardian.

In it, he stated: "It uncovers important dimensions of their stories – our stories – which are largely untold in the current distorted narrative of black lives."

Williams and team have now created a website for the project, which hosts each portrait along with an extended biography for each subject. 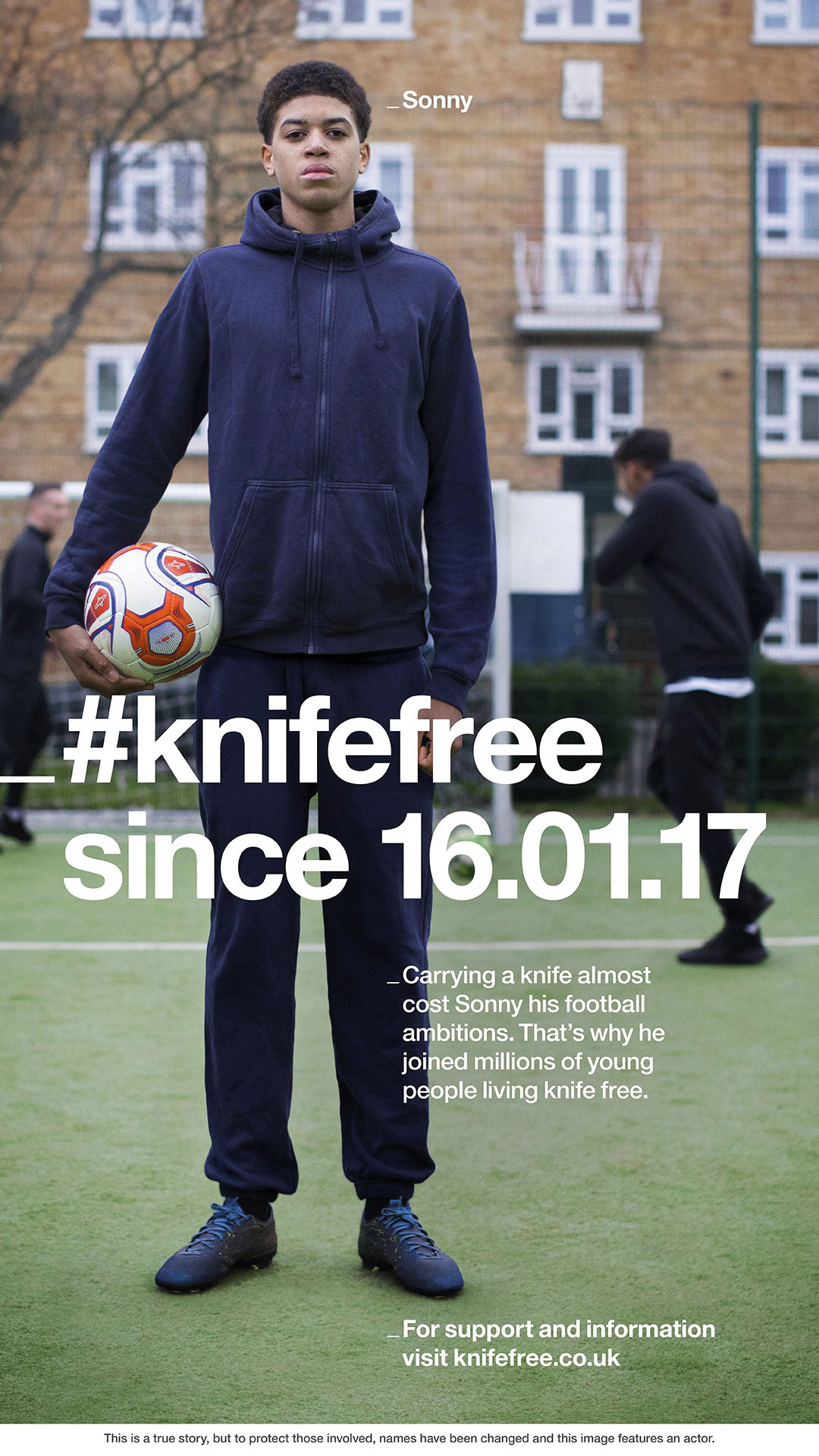 In August, the Home Office faced widespread criticism over its £57,000 "#KnifeFree" campaign. It involved the interior of more than 320,000 chicken boxes being printed with  ostensibly real-life stories, fashioned as short rap-lyric-style poems, in an effort to dissuade young people from carrying sharp weapons.

The overwhelming reaction to the campaign (with strategy by FCB Inferno and media by All City Media Solutions) has been a negative one, with criticism centring on the lack of grass-roots research and insight into the fundamental causes of the youth disaffection, which then spills over into violence.

Aside from chicken boxes, the work gave rise to a spate of articles – mostly written by BAME commentators – slamming both the concept and its execution.

The campaign also includes a website, www.knifefree.co.uk, which features videos and other media aiming to persuade young people to pursue positive activities instead of carrying knives. These campaign components are faring better, with various governmental social-media accounts still regularly tweeting its content.

In response to the initial furore in August, Word on the Curb, an online broadcaster founded in 2016 by Hayel Wartemberg, has lobbied the government by sending the chicken boxes back to the Home Office, with the addition of knife-crime solutions.

The solutions were gathered from passers-by at London’s Westfield Stratford shopping centre, and then handwritten on the #KnifeFree boxes.

'This was for the black boy in the community': Behind the '56 black men' project

WPP's Karen Blackett: I'm tired of diversity being seen as a problem, not a solution

Is putting #knifefree ads in chicken shops 'crude' and 'offensive'?

How I came to set up my own media agency

Change is too slow: the truth about the IPA's diversity report