Smiling nervously at the Campaign cameraman gazing down on them from above, John Bartle, Nigel Bogle and John Hegarty were pictured in a 1982 shot amid what, at that time, looked more like the detritus from a builder’s yard than what would soon become their start-up’s first home.

Their apprehensiveness was understandable. The notion that setting up shop during the high summer of British advertising was – in Robin Wight’s words – "like mugging old ladies" belied the reality. For every success story of the period, there were numerous casualties.

Bartle was certainly under no illusions about the attendant risks. "We were leaping into the dark," he was later to recall. "We had no business, we’d vowed that we wouldn’t do creative pitches and our houses were on the line. A lot of people forget that."

So how did Bartle Bogle Hegarty defy the odds to become one of Britain’s most successful and creatively potent agencies, with resultant knighthoods for two of the founders (Bogle and Hegarty) and a CBE for Bartle? How did it manage to produce a slew of award-winning work from Levi’s to Audi ("Vorsprung durch technik"); from Tesco to Barclays?

It was partly down to serendipity. Thrown together by circumstance, the trio turned out to be a triumvirate of equals, who not only got on well but effectively melded their different but complementary skills – Hegarty’s iconic creativity, Bartle’s planning insightfulness and Bogle’s strategic brilliance.

Probably more by luck than judgment, it was TBWA that first harnessed the team’s talents. Formed in 1970 by Bill Tragos, Claude Bonnage, Uli Wiesendanger and Paulo Ajroldi, who had worked together at Young & Rubicam France, TBWA’s plan was to establish itself as the first European agency network.

In need of a London agency but short of the cash needed to acquire one, they hired a launch team with the offer of small personal shareholdings. With Hegarty as creative director and Bartle and Bogle as joint managing directors, the shop blossomed, becoming Campaign’s Agency of the Year in 1981.

However, the trio’s harmonious relationship also led to agreement that they were getting a raw deal from TBWA. "It was a pan-European agency and was run along the same lines as socialism. Like socialism, it didn’t work," Hegarty says.

"Partners of each of their European offices would get a share of profits, regardless of their own personal performances. So offices in Frankfurt would be under-performing but earning money because we were doing well. By the early 1980s, me and a couple of the other London partners went to the board and said: ‘This isn’t working – we want a bigger share of our own office’s profits.’ But they told us to fuck off. So we did."

B, B and H’s decision to launch out of a one-room office in Soho was challenging but timely. Industry consolidation – as well as big client mergers – had yet to happen so there was more business around. What’s more, advertisers were less scared to hire start-ups because, in many cases, they could make a seamless switch to agency principals who were already experienced on their accounts. Unusually, Bartle, Bogle and Hegarty did not poach any TBWA clients, but it proved no disadvantage. The Audi, Whitbread and Levi’s accounts were all landed within 12 weeks of BBH’s opening.

This was testament to the synergy between the trio that transcended their different backgrounds and personalities. The avuncular Bartle, the son of a Leeds bus inspector and the first member of his family to go to university, was fascinated by market research. He learned to analyse marketing data with insight and originality at Cadbury, which he joined as a marketing trainee. At the same time, he was being beguiled by Boase Massimi Pollitt, then a Cadbury roster agency, where he encountered Stanley Pollitt, one of the founding fathers of planning.

Bogle was an altogether more enigmatic figure. A one-time wannabe lawyer who learned his trade at Leo Burnett, he was shy and diffident – almost taciturn – in his demeanour. Those who took him at face value, though, seriously underestimated Bogle and the way he drove BBH in his unflamboyant fashion.

Like Bartle, Hegarty also had humble roots. Small, lean and extremely likeable, Hegarty was a labourer’s son from Edgware. His passion for advertising went back to his first art-directing job at Benton & Bowles ("I was one of the first to ask my employers why the ads had to be so shit"). It was there that he worked with a tyro copywriter called Charles Saatchi – and Hegarty went on to join him at what became Saatchi & Saatchi.

It’s curious that such a seminal agency never claimed to have a unique approach to advertising. Instead, its founders promised themselves that they would be the best they could be. What did set them apart was their refusal to present speculative creative work at pitches. Their experience at TBWA had convinced them that such work was a huge waste of time and money and almost never used.

BBH, however, was the embodiment of 1980s cool. So cool, in fact, that some wags suggested everyone in the place wore black and there was hair gel in the loos. Nevertheless, BBH did build a reputation as a lifestyle agency, an approach greatly influenced by what Hegarty saw as the cultural shift Thatcherism represented.

"Whether you liked it or not, it gave people confidence to show their wealth: to wear that suit, to drive that car, to drink that drink," he remembers. "I think there was an ethos developing in Britain of ‘it’s not only what you are but how you look that matters’."

Today, BBH looks at ease with itself. Once an agency that yo-yoed up and down the billings rankings because of its habit of losing accounts soon after winning them, it now sits comfortably in fourth spot. And as a settled member of the Publicis Groupe family, it has a credible hub-and-spoke international structure that defies the sceptics.

Comfortable but never overwhelmingly so. BBH’s self-depiction as a black sheep in a white flock is symbolic of its sustained maverick credentials.

'My pinboard' by John Hegarty 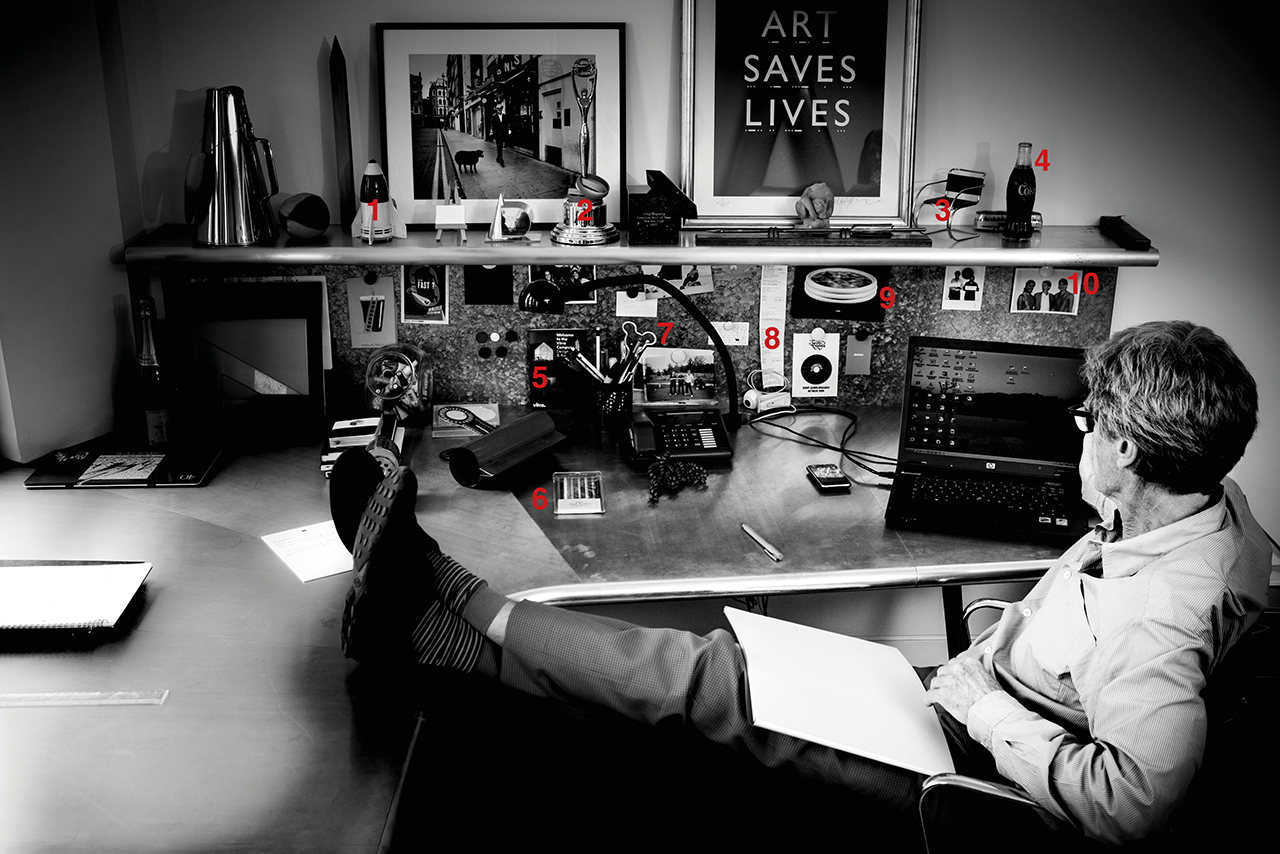 1 A rocket pencil sharpener bought in Japan. The top slides back and you sharpen your pencil, and then at the bottom it turns into a mini vacuum cleaner that sucks up any leftover sharpenings. That’s the Japanese for you.

2 My Clio Lifetime Achievement Award. Someone else telling me my career is over!

4 A Coke bottle. That’s a radio. A reminder, things aren’t always as they appear.

5 An invitation to the Vitra Campus in Germany. A brilliant example of how a manufacturer of office furniture creates a vision of how the world should work. Brilliant.

6 A pack of coloured pencils. I’ve got an obsession about colour – I love it. Probably a result of being brought up in grey Britain.

7 I remember saying to one of our art directors: "Great ideas sometimes look mad at first." They came back and gave me a pencil with Mickey Mouse ears.

8 A bill for the most expensive lunch at The Wolseley, £620,000. When I pointed out this error to Jeremy King – a decimal point in the wrong place – he said not to worry, the lunch was on him. Stylish.

9 A mailer from Paul Smith – a rubber duck in an inflatable paddling pool! Why not? It got pinned up on my wall.

10 A picture of me with two beautiful Brazilian models at our opening of BBH in São Paulo. And people keep asking why we opened an office in Brazil!