In the lexicon of corporate jargon, which has served only to muddle and obscure the realities of the modern workplace, the phrase 'work-life balance' is particularly damaging. 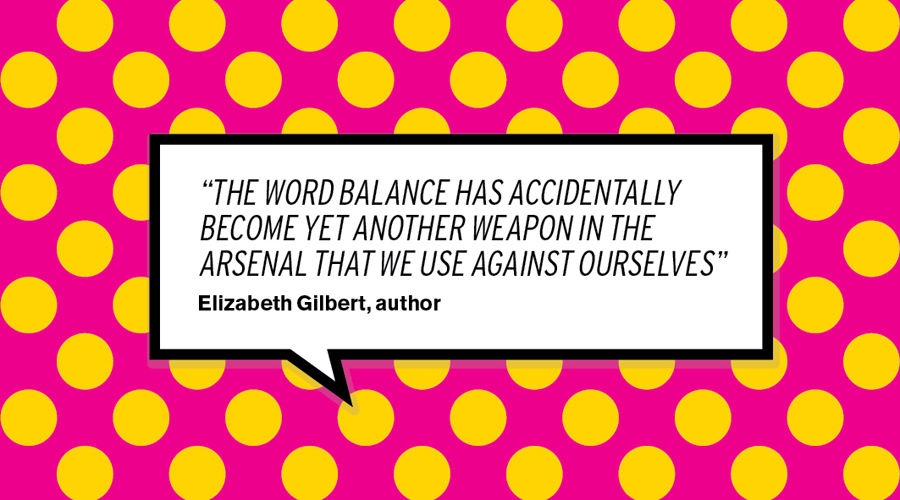 As Facebook chief operating officer Sheryl Sandberg passionately and articulately argues in her book Lean In, framing the issue as ‘work-life balance’ – as if the two were diametrically opposed – practically ensures that work will lose out when it comes to the crunch. Who would ever choose ‘work’ over ‘life’? Especially when women working full-time are still paid an average hourly rate that is 15% lower than men. In the UK, women face wage penalties for time out of the labour market as well, with mothers’ average earnings decreasing by roughly 13% per child.

So the construct of the work-life balance is, in effect, creating yet another unachievable goal for business leaders and another standard that will never be met.

Christine Armstrong, co-founder of communications consultancy Jericho Chambers, says that flexible working sounds good, but, in reality, "it means you’re always running, always on and always trying to fight the guilt that you can’t be in two places at the same time". She continues: "We need to talk about [how to find balance]; to not talk about it would be worse. It can be so lonely, so brutal. There are days when you feel so tired, you feel sick. We need to keep driving for it to be better."

Certainly, business leaders have a responsibility to challenge the culture of presenteeism that dominates the fabric of the creative industries. If employees are working on a pitch or a new campaign at 4am, it is not a testament to their dedication, but evidence of a toxic culture that supports outdated and increasingly backward working practices. As cultural critic Margaret Lyons explains: "The opposite of being degraded isn’t being revered – it’s being seen as a fully complex human being." Moreover, these men or women have responsibilities outside the office.

Myriad research findings also support the view that having a life outside work is good for business. According to a study published by Peter Limbach, of the Karlsruhe Institute of Technology, and Florian Sonnerburg, of the University of Cologne, companies in the US’ S&P 1500 index with chief executives who had completed a marathon were worth 5% more on average than those where the CEOs had not.

Clearly, not every employee will have the grit and determination necessary to run a marathon, but the point stands that having the space to develop both personally and professionally should be sacrosanct. The discourse surrounding the work-life balance does not do enough to address this pressing issue. It is perhaps best summed up by author Elizabeth Gilbert, who writes: "Here’s the thing about balance – it is, and maybe should be, a momentary and fleeting condition. We may reach it at certain instances, and it is glorious in those instances. But then the ground shifts under our feet again."

Top 10 ads of the week: Iceland pips Sainsbury's to the post