Argos' yetis take over the trampoline

Argos is the biggest brand to get in on the John Lewis parody bus this year. The spoof, created by CHI&Partners, features the colorful yeti from Argos' own Christmas ad this year.

For the second year on the bounce, PR agency Frank and a team of students created a discount version of the ad for its client MyVoucherCodes, which it said cost $747 and was put together in six hours, versus the original's $7.4 million budget and six-month production process. Click to see last year's effort.

Comedy website The Poke is also making a tradition of creating parodies. After last year's Star Wars-themed spoof, 2016's parody is said to have taken four hours to make, and cost less than the price of a John Lewis trampoline. It recasts the cute critters in John Lewis' original as undesirable vermin.

BBC Three created a simple parody, which it posted on its Facebook page, by reversing John Lewis' effort, and reinterpreting the story.

Scottish beer Tennent's Lager's spoof was released on YouTube with the simple description; "If the John Lewis ad was filmed in Scotland."

Independent film company Redshirt Films' parody brings back the somber tone of previous campaigns. Redshirt Films said it fixed the ad so that anyone who was upset about the 2016 installment's upbeat sentiment can be "as miserable as they seem to want to be."

That Lot Trumps the retailer

A topical version here from social agency That Lot—mashing up segments from the John Lewis ad with scenes from this week's second-biggest news story, the US presidential election.

Can it really be considered a parody if it happened before the real thing? Who knows. Anyhow, student Nick Jablonka caused quite a stir earlier this week, when his A-Level Media Studies coursework, which had been uploaded to YouTube in the summer, suddenly fooled many people into believing it was the real thing.

It has now been viewed more than 1.2 million times on YouTube, reported across the national press, and landed him the offer of a job at the PR agency W.

Fold7 created some reactive outdoor work for Gumtree, which went live the weekend on 1,000 six-sheet digital screens after the John Lewis ad broke. According to the brand, thousands of trampolines are ready to make someone's Christmas. 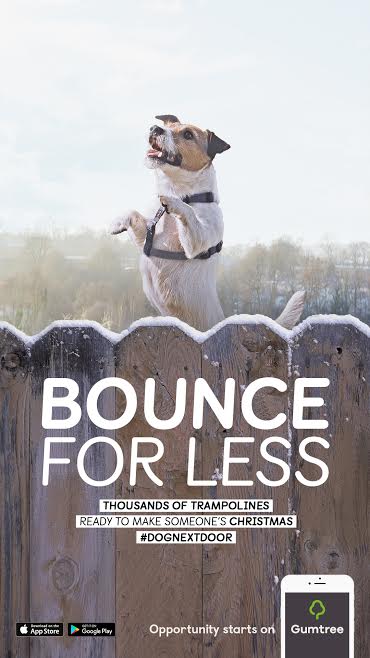 Finally, bringing you back to reality, here's the real thing in all its glory. Click to get the lowdown on the campaign.

If you've scrolled this far, chances are you'll also want to check out last year's parodies.

A version of this story originally appeared on PRWeek.