Camp+King's first task: tweak one of the most famous rabbits in the world, but keep the attitude and the shades

Making changes to a beloved brand mascot is a process fraught with potential pitfalls. Characters need to evolve along with technologies and taste, but a redesign risks losing what endeared audiences to the brand in the first place. KFC’s recent campaign from Wieden+Kennedy subverts the challenge with a string of fake Colonels, while Deutsch NY has spent 10 months working on the latest version of the "Jolly" Green Giant, expected to debut in early November.

Last month, an even more popular advertising icon – the Energizer Bunny – unveiled a new look as part of the "Bigger, Better, Bunnier" campaign, the first work for the brand from San Francisco shop Camp+King, which won the Energizer account in January in a review. Prior to that, Energizer had been with TBWA\Chiat\Day for 25 years. At the time of the win, the move sparked rumors that the Bunny might get the boot until Energizer's Chief Consumer Officer Michelle Atkinson made it clear he would remain a highly visible part of the brand.

Since his debut in 1989, when he was created by DDB as a spoof of a Duracell mascot, the Bunny’s look has remained relatively unchanged. "We wanted to make the Bunny feel 'real' again," said Roger Camp, partner and CCO at Camp+King. "He was at his best when he felt like a real toy. When he was breaking through the TV sets years ago, he had a sense of mischief and rascal-like quality, and there was a still a little bit of mystery about where he was headed off to."

More a makeover than a full revamp, the Camp+King version is a bit more svelte, with brand new fur and a wider range of motion. In the new spots, the Bunny shows off his new flexibility, his independently moving legs and his wagging puff of a tail.

Newly released creative assets from VFX & design company The Mill reveal some of the behind-the-scenes planning that went into the Bunny’s new look. He needed to be easier to use across different media, and a digital character can convey more personality than the classic animatronic Bunny.

"We wanted to expand his range of movement to create stronger performances, so with that came looking at the design and thinking about how a modern robotics toy would be manufactured," said Robert Sethi, creative director at The Mill and director of the new spots. "We started with connecting the arms and hands." They added details to his toes and fingers, which before had looked more like mittens.

Rather than a simple fist clutching his drum mallets, he can toss them in the air. He has whisker stubble. And he actually walks, rather than just rolling along. At first, Camp considered having the Bunny take off his sunglasses at some point, but the feature was determined to be too popular to discard, though he adds future spots will change "certain aspects moving forward, like not having him always carrying the drum, setting down the mallets."

Early sketches toyed with enabling even more motion than is present in the final spot, or adding a mouth (he’s never had one, and still doesn’t). 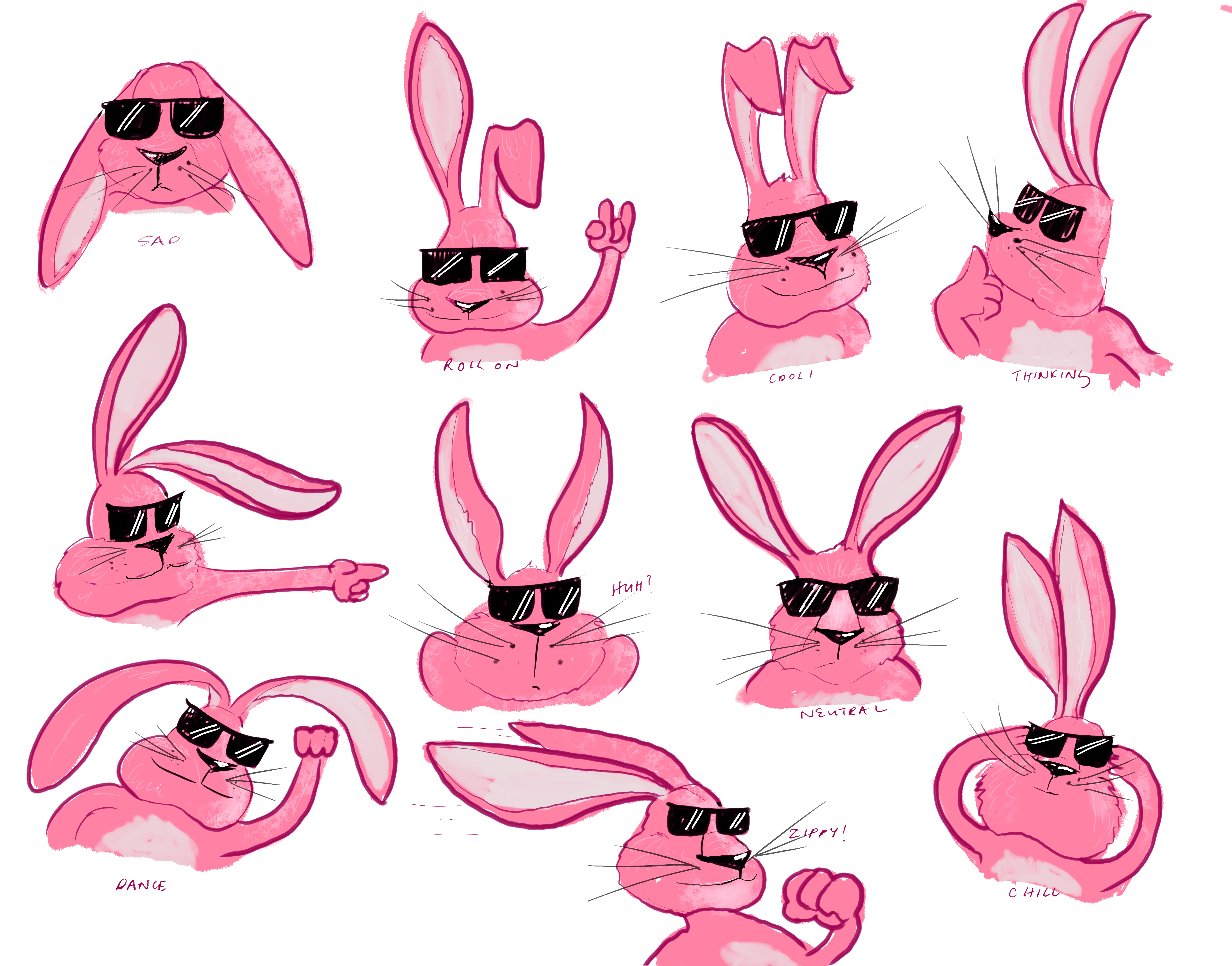 Even as the final storyboard for the intro spot came together, the movements the Bunny needed to make highlighted shortcomings in the design. At first, he looked good in his CGI skin. "We thought we were going in a good direction, only to find out when we put the fur on him, it bulked him out and changed the silhouette," said The Mill’s Jason Monroe, lead 3D artist on the campaign. The team had to go back and slim him down to get the right proportions.

An early attempt to add a bit of facial hair was also aborted. It was more rabbit tuft than full hipster, but "it definitely aged him," Sethi said.

Over the next few months, Energizer will roll out two more spots focusing on the redesign, in addition to two that are already out. In an homage to the early "interruption" spots from the '90s, he’ll run as momentary bumper ads on YouTube videos. And perhaps unavoidably, Camp+King will release a Snapchat lens that transforms users into the Bunny.

"We've taken note of the old Supervolt supervillain series and realized he's pretty endearing when he finds ways to defeat a foe by simply doing what he's always done best — just keep going," Camp said. "He doesn't need to be a superhero or go out of his way to win."

Whether this iteration of the Energizer Bunny becomes as popular as his forebear remains to be seen. But for Monroe at The Mill, being a part of his reinvention has been a defining experience. "When in your career do you get to take such an iconic brand and develop it, work on it?" he said. "I’ve been doing this for a long time, and I’ve never had an opportunity like this."

Why reinventing a brand is not about logos

Emerging from bankruptcy, Rayovac advertises for the first time in a decade