Heathrow needed to engage passengers' hearts and minds, encouraging them to spend more emotional and physical time with the brand.

When Heathrow Airport issued Havas London with the ambitious challenge in 2016 to increase year-on-year retail sales, we knew this needed to go deeper than just promotional activity.

So we set about finding out what would motivate customers to engage with the airport retail space – one of the world’s biggest, with more than 75 million passengers travelling through every year.

A TNS shopper behaviour study conducted in 2012 told us that the challenge came down to time. We needed to engage passengers’ hearts and minds, encouraging them to spend more emotional and physical time with the brand.

To that end, we focused on three key areas of growth in order to deliver against the target.

First, talk to people as individuals and demonstrate that every journey matters to Heathrow, regardless of where people are travelling to and what they’re travelling for. Their individual stories and needs are the things that define Heathrow’s raison d’être.

Second, position Heathrow as a global leader by creating a higher purpose that resonates with a wide target audience.

Third, use the previous two areas of growth to remind people that Heathrow is the best choice for flight connections as well as a point of departure and arrival.

We knew that we had to leverage the existing seasonal travel surges within Heathrow (the key travel points of summer and Christmas), those peak moments that benefit from increased passenger numbers and therefore offer the highest potential for increased retail spend and additional services or product benefits.

As this would mark Heathrow’s first foray into brand activity, our 2016 summer campaign was our opportunity to establish the brand’s new positioning and drive brand relevance.

Christmas, on the other hand, required a greater retail focus. As a key gifting period, we needed to build on the new brand story and use it to encourage retail engagement at the airport.

Summer for Heathrow was all about moments of connection through adventure as people head out on their summer holidays. Our "First flight" ad showed a young girl and her suitcase experiencing her first flight, capturing the wonder of travel and her reactions to the experience of travelling through an airport

Christmas holds far more sentimentality. Our insight was that Christmas is a time when you come home to your loved ones. A time for coming back together, for reuniting and reconnecting. A time when the distance between us is forgotten and families celebrate their love for one another.

Brands that deliver world-class marketing make their higher purpose feel personal. For Heathrow, that meant showcasing it as one of the most forward-thinking airports in the world – an establishment that progresses people, rather than processing them.

Famously, a cleaner who worked at Nasa once stated that his job was "helping to put a man on the Moon". This example of higher-purpose thinking is what has the potential to unlock Heathrow from a pure facilitator of travel to a brand that enables each passenger to progress with every journey they make.

We started by developing a new positioning that shone a light on passengers and drove brand relevance by celebrating a higher purpose at an individual level:

Heathrow brings us all closer.

People flying around the world. Families reconnecting on holiday. Strangers who share the same destination. Travellers who have more in common than they realise.

The bears are born 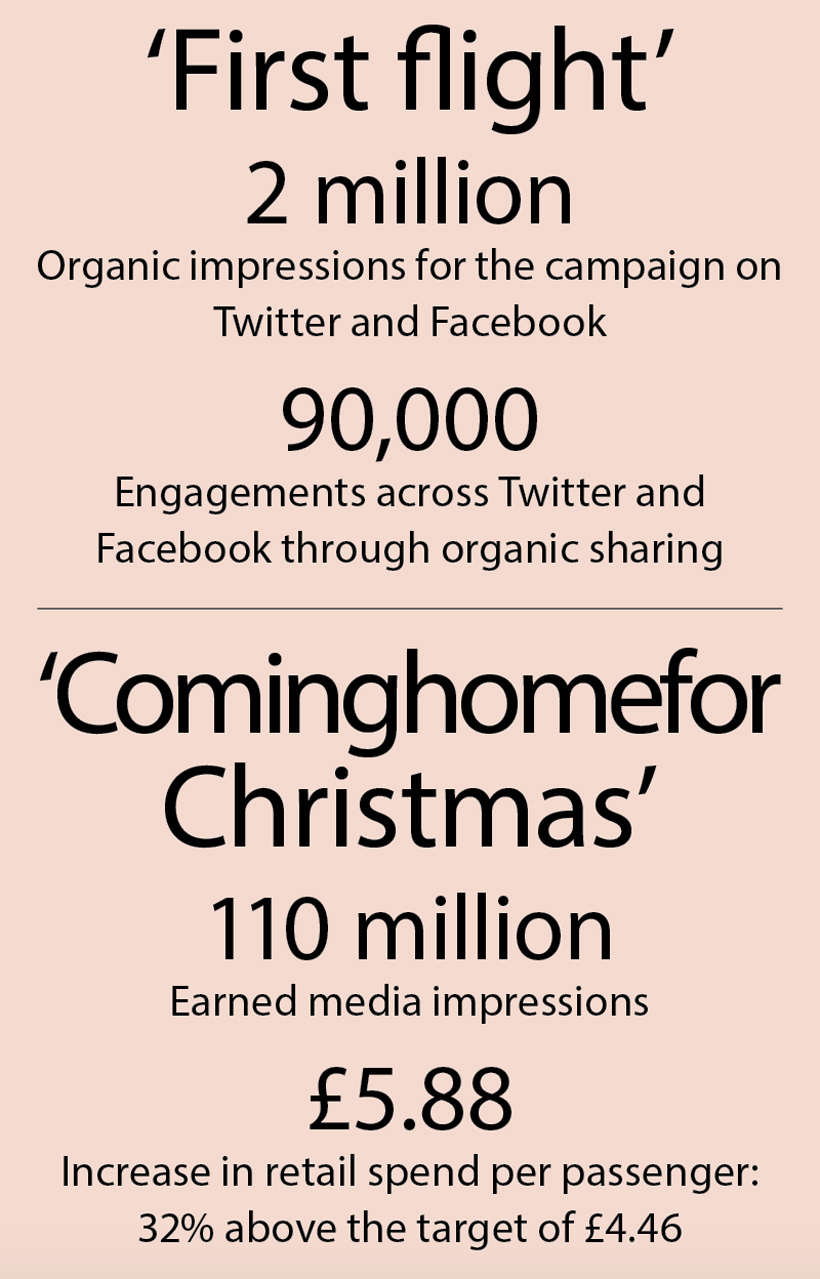 We had two objectives for the "Coming home for Christmas" campaign.

First, build on the brand love generated through "First flight" and Heathrow’s 70th-birthday celebrations in the summer of 2016.

A big, creative idea was required that could manifest itself as a hard-working retail execution, but, equally, deliver a heart-warming, emotionally powerful brand story at the most competitive time of the year.

It was no doubt a tall order to provide Heathrow with cut-through, but we had confidence in the power of the emotions that naturally reside in the airport over Christmas.

While summer was a time for people to depart on their adventures, Christmas was the time to come home to your loved ones.

That led us to a single, powerful thought: Heathrow can provide the most precious gift of all – the gift of coming home.

Our beautiful film showed two bears travelling home for Christmas, highlighting charming moments of their experiences as they move through Heathrow to meet their family, revealing their true selves as the story unfolds.

The film made a successful debut online, followed by TV with supporting print and outdoor executions on commuter routes and in high footfall areas.

Alongside the bears, retail-focused executions encouraged people to take home an extra-special something this Christmas – whether that was their favourite chocolates or the designer handbag they had been coveting. This execution brought the bigger sentiment into the retail space, encouraging people to reserve and collect online or find the perfect gift in-store.

Digital and social channels supported brand and retail executions. Together with Heathrow’s media agencies, Carat and iCrossing, we were able to devise a retargeting strategy to ensure one cohesive story was told to our audiences, so that the combination of brand exposure and retail messages worked together to achieve maximum impact.

We connected with our known passengers via a CRM programme, gaining considerably more impressions for our brand campaign, with the narrative resonating strongly with this audience. The activity drove five times as many people to Heathrow Boutique to reserve and collect gifts than outside these peak seasons. 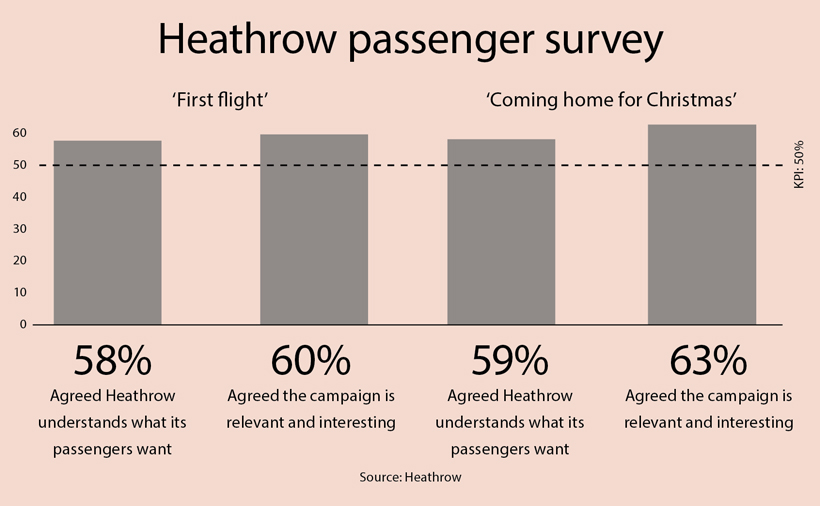 Before even airing on TV, the bears film was phenomenally successful.

Media platforms and individuals alike shared the ad, which resulted in 110 million earned views from Facebook posts over the six-week campaign period.

This outweighed the 884,000 online views we were able to achieve through media spend and exceeded our expectations.

It connected with both the UK and an international audience, driving huge volumes of earned engagement for Heathrow. The work also encouraged people to spend physical time in the airport and resulted in a significant uplift in passenger spend and love for the brand.

Last year firmly established the Heathrow brand in people’s hearts and minds – 2017 has been like the difficult second album.

Through our brand positioning, we have succeeded by shining a light on individuals and their stories as they pass through the airport. The 2017 Heathrow vision was to build on this strong foundation by continuing to show our human side and understanding of passengers’ emotions and needs.

This year, we’ve established a new human insight to inspire our creative campaigns: Heathrow believes that now, more than ever, people need to feel closer to each other, so we made 2017 the year of bringing people closer.

Our "Wonderers" film that launched this summer shone a light on the variety of people who pass through Heathrow each day, with a narrative that acted as a rallying cry for everyone to continue to look up and wonder what is out there.

We encouraged families to get closer to the world through a Kids Go Free promotion that enabled children to travel free on the Heathrow Express train service, eat free in selected Heathrow restaurants and fly free on selected British Airways flights. This was promoted through social, digital, CRM and out-of-home.

Alongside our family activity, we ran an out-of-home campaign that told the stories of individuals in the airport and their emotional reason for travelling, providing a glimpse into their life as one of many flying through Heathrow each day.

Our brand positioning will continue to inspire passengers and staff alike. We will keep our focus on being smart and effective and driving passenger numbers and spend, by working closely with Heathrow and its data and media agencies to evolve the airport’s marketing model. •

Heathrow bears depart Florida for the UK in Christmas campaign

The bears are back in town: Heathrow's endearing teddies return in second Christmas campaign

Pick of the week: Heathrow "Coming home for Christmas" by Havas London