Bartle Bogle Hegarty has created a babygrow for St John Ambulance, as the next stage of its campaign to increase awareness of how to give first aid to babies.

One hundred larger Tesco stories will give away 24,000 units of the garment this Thursday. The distribution deal came about thanks to Tesco also being BBH’s client. A second batch will be made available via a social media giveaway.

The babygrow features the Humpty Dumpty character featured in the "Nursery Rhyme Inc" ad created for the charity by BBH earlier this year, which provides information on the same issue: how to give CPR to a baby that has stopped breathing.

Humpty Dumpty, along with other nursery rhyme-inspired characters in the spot, was designed by Becky Sloan and Joseph Pelling, the directors behind the internet series 'Don't Hug Me I'm Scared'. 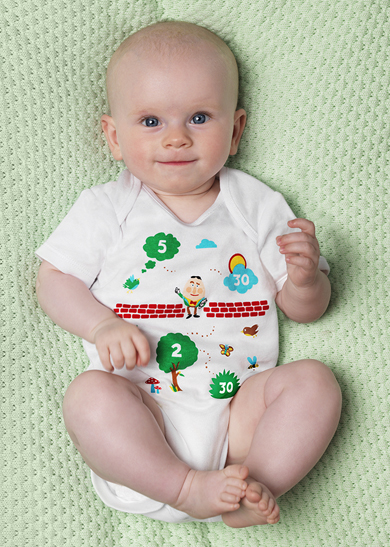 The front of the babygrow features a colourful graphic indicating the main steps that should be used in the CPR process, while the full instructions are printed on the inside.

Emma Sheppard, head of brand and communications at St John Ambulance, said the project reflected an ambition for the charity to shake off its "old fashioned" image and become more relevant to the people it was targeting.

"We changed strategy last year, moving away from our harder-hitting work, into doing work that directly educates people," she said.

The decision to use a baby outfit to carry the brand’s message was simply about putting in where it would be most accessible and useful, said Ian Heartfield, deputy executive creative director at BBH. "A film is one thing that people do share, but if you can have the first aid lesson physically in front of you, that’s even better."

Heartfield added that the project showed there an opportunity for creatives to be open minded about the media they consider using: "If it’s right for the idea and right for the brand we should do it."

Why compromise is not a dirty word

Trouble at the top: Why agencies like BBH should focus on succession planning