In its third year, the program expands its reach, as well as the definition of agency diversity.

There’s a well-worn path to becoming an ad agency creative. Undergrad, portfolio school, internship, entry-level—deviate and the industry becomes much more difficult to break into.

But for the past three years, BBDO New York has been quietly running an innovative program to recruit talent from beyond the usual pipelines. Initially conceived as a diversity program, the Creative Residency has expanded its purview to cover diversity of thought and experience—DJs, science fiction writers or creatives who had never considered advertising as a career— while shepherding 12 people into full-time jobs. And this year, the program is going national.

This year’s residents include Raymond Li, a painter and photographer who’s worked on new business accounts at MediaCom, and Storm Smith, a deaf filmmaker and motivational speaker. The third resident, Andy Deaza, has a more traditional advertising background, with experience at Miami Ad School and agencies like JWT, FCB, McCann and SpikeDDB.

"For me personally, I was nervous, because I think I’m the only deaf person in this company, ever," Smith said. "I knew it was a fast pace. The other two have more experience [in the industry] than I do. It’s a totally different world to survive in." The three residents ease communication with a smartphone app that transcribes speech for Smith to read, and Deaza and Li are learning sign language. 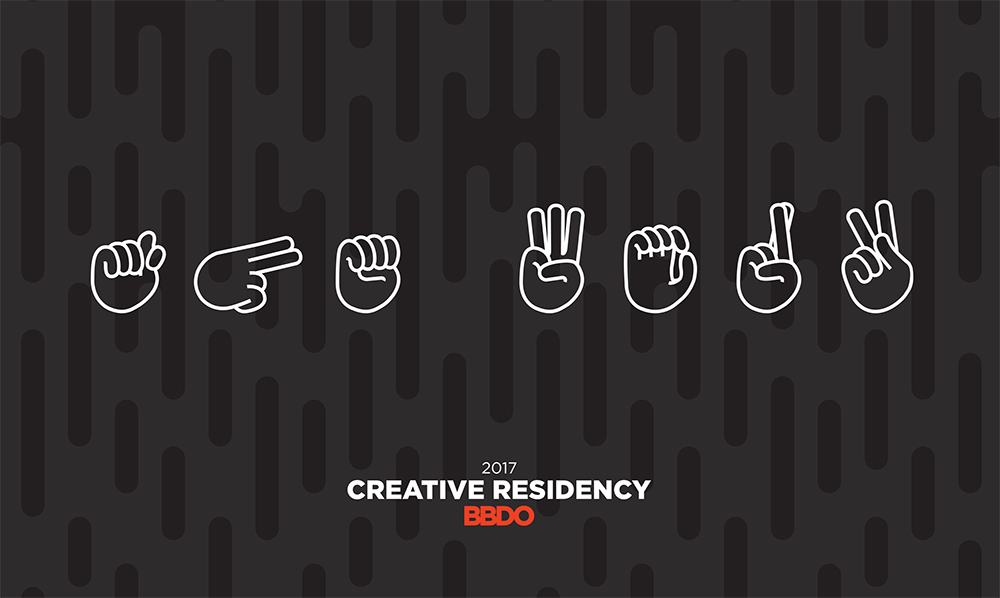 The Creative Residency program is officially in its third year, but it’s difficult to distinguish former residents from current—except for a single member who was poached by Apple, they all still work at the agency. It’s meant to be a simple transition; while the residencies last for a year, the purpose is to funnel talented creative into the agency, "a pipeline for great talent that nobody else is tapping yet," according to David Lubars, chief creative officer for BBDO Worldwide.

The program grew out of a desire to increase black representation at the agency. In 2014, Lubars received a request from the One Club to send a creative to its long-running "Here Are All the Black People" multicultural career fair, then in its fifth year. "So I sent myself," he recalled.

During a panel at the event, a question from the audience asked what black and minority creative should do to get their foot in the door at an agency. "Some of the people on the stage weren’t in the position that I was in" to make hires, Lubars said. So he decided on the spot to hire five people of color and tasked Michaels with selecting them. "It’s not that hard, it’s just deciding to. I just wish we’d done it earlier," he said.

If the residents themselves are nontraditional agency folk, the recruitment method is even more so. Rather than conduct interviews, Michaels and Karla Mayers, EVP, director of diversity and supplier diversity at BBDO New York, identify potential candidates they meet through networking or industry events and monitor their projects and success for as much as a year, sometimes even longer. Amy Lai had been on Michaels’ radar for the initial class of residents, "but we kind of lost touch," she said. "He found me again when I won MAIP Intern of the Year. ‘We’ve been looking for you!’" Lai joined BBDO as a resident in the program’s second year and now works as a junior art director at the agency.

"It’s the friendliest kind of stalking," Michaels said. "At the end of this process, we cold called them at their job, asked what they were doing, and told them that they should quit and come work here because they have a job here now." With only one exception, they all did.

"Out of the gate, we're providing a full-year commitment and a full-time job with unwavering support from the agency, quickly leading to real work for some of our biggest clients," said John Osborn, CEO of BBDO New York. "Most importantly, the program is working. Residents are converting to ongoing copywriter and art director positions in the agency, and so the benefits of the program are enduring. And it's focused purely on creatives, which is the area of the business that the industry and BBDO needs to most keenly address with regard to finding, cultivating and maintaining diverse talent."

Now that BBDO New York’s Creative Residency program has matured, it’s expanding to BBDO’s other offices in the US. "We wanted to make sure we had this down, that it was successful," Mayers said. "We felt it was a good time to make that transition."

The other offices will be able to lean on New York for guidance, but each location will be responsible for determining exactly how the residencies will play out. "They have different cultures. They’re not New York," Michaels said. "They don’t have the exact same rhythm and style that we do, so they have to find people who match who they are."

Each office will have at least two residents so newcomers have a partner. "I was delighted when David came up with this program," said Debbie Lindner, EVP, chief people officer at BBDO Atlanta. "It’s interesting how you invigorate and plant seeds of change in an organization."

Atlanta is still working out the exact budget for the residencies, which will determine how many people they’re able to hire this year. "We want to make certain we find the right talent," Lindner said. "They’ll tend more to be junior to mid-level and focused on digital capability."

As in New York, the recruitment process will be long-term. It will begin this summer, so Atlanta expects to start making offers early next year. Once the North American offices have their Creative Residencies firmly in place, Lubars expects the program to go global.

As for Michaels, he’d be happy to see it expand beyond even BBDO Worldwide. "Our greatest hope," he said, "is that people rip off this program and do it everywhere."

The class of 2017 wants it all: Work-life balance and a well-paid future

What's in a name? BBDO campaign aims to put more women on the map