Simon Cowell stars in Barclaycard’s new campaign to educate customers about how to take control of their credit card payments.

The ad, by Droga5 London, promotes the brand's repayment calculator tool, which helps users pay off their balance sooner and accrue less interest. It is Droga5’s first work for the consumer division of Barclaycard.

In the film, Cowell launches a talent show in Antarctica – a seemingly strange move for a successful entrepreneur. He suggests the repayment calculator makes as much business sense as his new venture, because the tool actually helps cardholders to pay less interest. The idea is to demonstrate that Barclaycard’s services put customers first.

Cowell tweeted about his fake talent show on Monday. 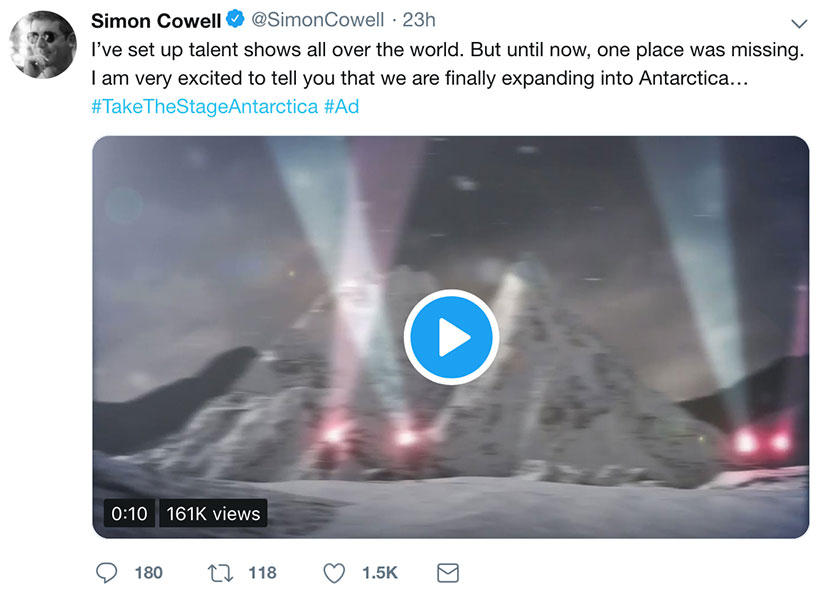 He said: "I wanted to work on this campaign because I love the fact that Barclaycard has created something that’s entirely in its customers’ interests. Paying off a little extra each month could save a lot in the long term and it’s important to know the difference it can make."

The campaign launches on Tuesday and will run for six weeks across TV, out-of-home, radio, customer channels and on Barclaycard’s website. The film will also appear during one of Cowell’s most famous shows, Britain’s Got Talent.

Alex Naylor, UK marketing director at Barclaycard, said: "This campaign shows not only how serious Barclaycard is about helping customers to pay less in interest and clear their balance more quickly, but also in educating consumers about their finances.

"By working with Simon and engaging with consumers across multiple channels, we hope to drive conversation and help people better manage their finances. We’re thrilled that one of the world’s most recognisable and popular businessmen has collaborated with us for this campaign."

In January, Droga5 launched its first campaign for Barclaycard's business division that puts the spotlight on unusual small businesses across the country. It has so far featured The Crystal Barn in Kettering and The Upside Down House in Bournemouth.

Can Droga5 maintain its creative culture after Accenture's acquisition?

Barclaycard follows Crystal Barn with visit to Upside Down House