The proportion of staff in UK agencies from black, Asian and minority-ethnic backgrounds has fallen at each of the three highest levels of seniority, according to diversity data in the latest IPA Agency Census, which is out today.

People from BAME backgrounds also make up a slightly smaller proportion of the overall workforce, down 0.1 percentage point to 13.7% – but they have better representation among middle managers, where they now make up 14.5%, up from 12%. At junior level, the figure rose 0.8 percentage point to 17.7%. 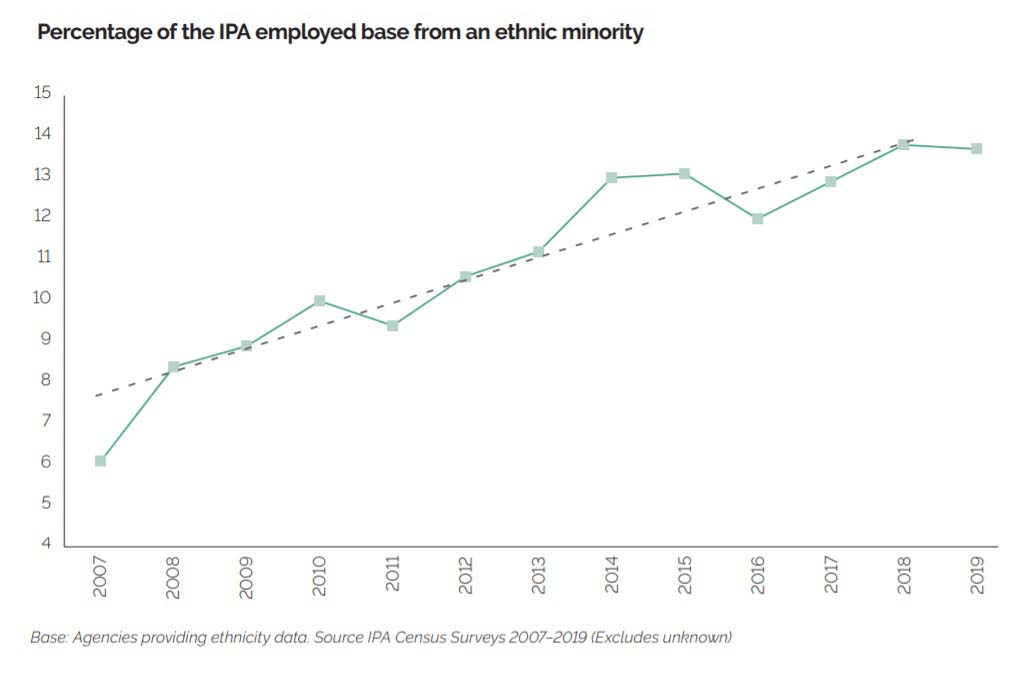 Media agencies reported a greater level of ethnic diversity, with people from BAME backgrounds making up 15.8% of staff, compared with 12.3% for creative and other agencies. Representation is higher at all levels in media agencies than creative agencies, and almost twice as high at senior levels.

The figures mean the industry is still some way from meeting the targets set by the IPA in 2015, when it began compiling diversity data.

The organisation had said agencies should achieve 15% BAME representation in leadership roles and 25% among new starters by 2020.

The figures for this year will only be revealed in the census in around 12 months from now.

Dino Myers-Lamptey, founder of The Barber Shop, said that while the data was disappointing, it did not tell the whole story.

"The IPA must start to measure their agency leaders with a firmer yardstick," he said, "and, with that, they should publish some of the big omissions from this census – such as the ethnic pay gap, which if the gender pay gap of 24.4% is anything to go by could be an embarrassing truth leaders have to tackle head on.

"Counting what can be counted is only step one. Real insight lives in undisclosed bonuses and in tracking progression throughout agencies. Then there's the even bigger question: what does all this look like in our clients' marketing departments?"

Myers-Lamptey added that the impact of the coronavirus pandemic made it even more important to monitor and report diversity in agencies to avoid making steps backwards as agencies "retrench to ’safe’ behaviours, with familiar faces from familiar places".

Ali Hanan, chief executive of Creative Equals, said the slow progress "reflects the bias in the way the sector recruits (staff-incentivised bonus schemes, from ‘networks of networks’, which are historically white)".

She added: "When will the sector wake up and ensure this becomes an urgent business priority – even more so in the current Covid-19 climate with furloughing, redundancies and restructuring top of mind?"

While adland has a long way to go to reach the IPA’s target on BAME representation, the picture is more encouraging on gender diversity. Women now make up a third (34%) of the C-suite, up from 32.7% in 2018 and the highest level to date – although this still falls short of the IPA’s target of 40%. 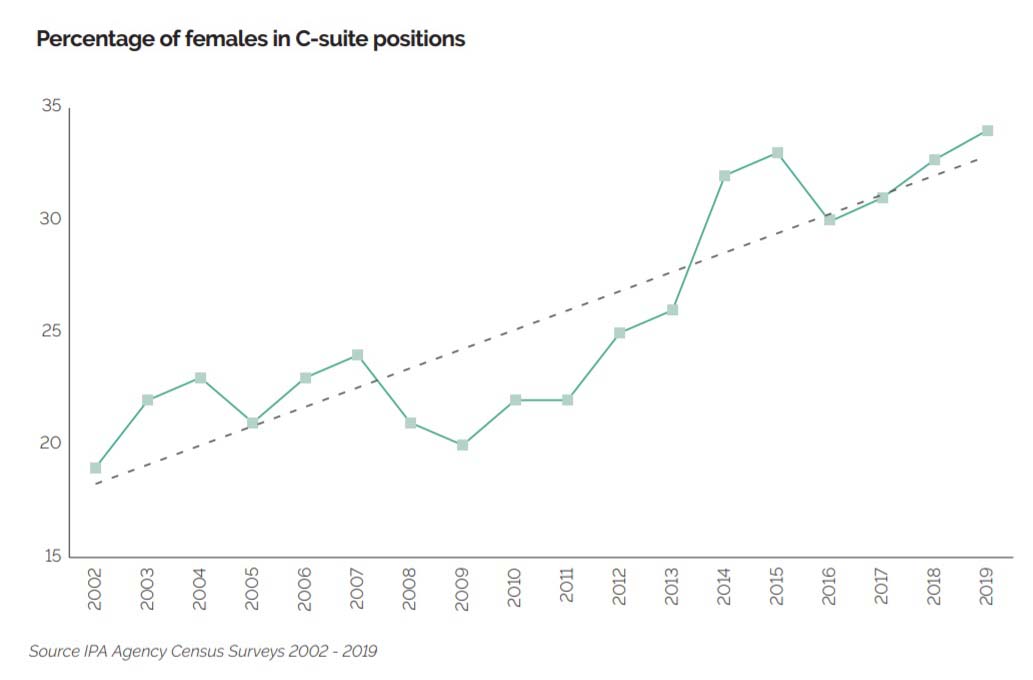 Women’s representation in head of department roles has dropped by 3.1 percentage points to 40.4%, but among other senior staff it is up 3.8 percentage points to 47.3% – and women now make up 55.1% of middle managers, up from 51.2%. Women are better represented at every level in media agencies than in creative and other agencies, except in the chair/chief executive/managing director segment, where the numbers are 28.8% (media agencies) and 29.8% (creative).

The Census also gathered salary data and found a slightly increased overall salary gap between men and women of 24.4% – up from 24.2%. Within levels of seniority, the gender pay gap ranges from 18.7% at C-suite level to 0.9% at junior level.

The gender pay gap is much more pronounced at creative and other agencies (28.1%) than media agencies (19.8%), and this holds at every level apart from C-suite. Even at junior level, there is a 6.4% pay gap in creative agencies – whereas at media agencies this figure is -2.2%, meaning female staff at this level are paid slightly more than their male counterparts.

Hanan said: "Let’s look at the data with a macro, historic overview: given the fact [women in C-suite roles] was 19% in 2002, it has taken 20 years to not even double. At this rate, it will take at least another decade to reach parity. The entry-level figures are reassuring, but the real question is what is happening to women’s careers that make progress so glacial?"

Paul Bainsfair, director-general of the IPA, said: "Once again these figures show that while some improvements were noted in some areas in terms of the diversity of our industry, these are marginal at best and too slow in pace.

"Having said this, we do know that there is an inevitable lag between action and results. While there are mild fluctuations year on year, looking at the bigger picture over the longer term, the overall trajectory of the major trend data charted within the Census is positive."

Bainsfair added that the IPA wanted to applaud agencies that were showing the best performance in improving diversity and pointed to the publication next month of the iList – an initiative to recognise ad practitioners who are helping to make adland a more inclusive place, in association with Unilever and Campaign. The IPA published a shortlist of 63 names in February.

Earlier this month, Campaign published its own diversity data from agencies featured in the annual School Reports.

This painted a similar picture to the IPA Census, with higher levels of female representation in senior roles but a marginal dip for BAME leaders.

School Reports 2020: Meet the top of the class

Which skills are going to be most in demand as the ad industry recovers?

"The IPA will help agencies and the industry to be resilient, to reorient and renew"

The month in advertising: A love letter to the industry

School Reports 2020: Who made the diversity grade?