Rum brand Bacardi organised an exclusive Rudimental and Bipolar Sunshine gig at The Vaults on Leake Street in Waterloo last night (11 July) as part of its Bacardi Beginnings music programme.

The two music artists performed at the London venue less than 24 hours after collaborating to write, record and release an original track called Distance (Bacardi Beginnings).

The event forms part of Bacardi’s music mentoring programme, which returns after its launch last year to celebrate the rum brand’s 150th birthday and provide a unique platform for some of the UK's best up-and-coming music talent to be mentored by established acts and showcase their sound to a wider audience.

Lisa Jazwinski, brand director for Bacardi UK, said: "Bacardi Beginnings was hugely successful last year and proved to be a great platform for some of the UK's best up-and-coming music talent to increase their profile and showcase their music and artistry.

"This year we evolved the programme to deliver greater standout and awareness, which is much needed by breakthrough artists. Bacardi rum has championed new music artists since the brand was created in 1862, and this year’s campaign, being bigger and bolder, is further commitment to our support of emerging talent." 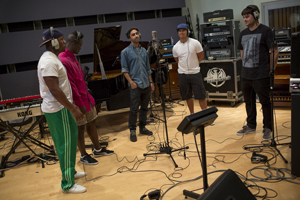 As part of the campaign, Bacardi will be organising two further projects at the end of this month and in October.