'Times are weird. The news is depressing. BABE wanted to relieve some of these feelings and bring some positivity to our consumers.'

It took BABE just under 21 hours to give away one million dollars worth of wine.

Damn. That’s a lot of vino. But not too much. Because there is no such thing.

The Anheuser-Busch brand (which you may recall bought it from Josh Ostrovsky AKA The Fat Jewish for silly digits around a year ago) handed out swag to fans in a bid to encourage the stay-at-home mentality as COVID-19 tears through America.

"Times are weird. The news is depressing. BABE wanted to relieve some of these feelings and bring some positivity to our consumers," Chelsea Phillips, general manager at BABE, told Campaign US.

This campaign all started with a "CANCEL 2020" hat that the team came to Phillips with unprompted. It snowballed into BABE’s $1 million dollar wine giveaway that took place last week. More than 250,000 people visited drinkbabe.net in less than 24 hours -- 11 times higher than its best month. 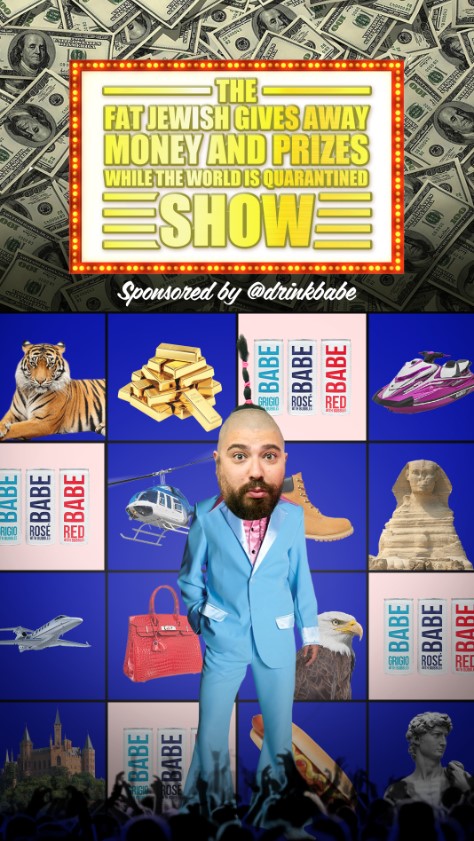 She continued: "We got responses from friends of first responders who wanted to celebrate them, bachelorettes who are planning virtual celebrations -- it was really amazing and we wanted to do even more as a brand to help them out."

Its success quickly sparked a trivia Instagram Live show hosted by Ostrovsky. One of the first sessions took place at 3pm EST last Friday via  @thefatjewish. During BABE’s show, it gave a free month of rent to a cocktail server from Vegas who had lost her job.

"What makes BABE unique is that it started from the voice of the consumer on Instagram. We are constantly paying attention to what people are saying in our comments," Phillips explained.

"We’re going to continue to find ways to keep our people smiling during this difficult period. We're working harder than ever before, but having a blast and staying true to who we are as a brand while we do it."

Of course, this hasn’t come without its challenges.

The general manager said that hurdles include everything from the entire organization answering customer service emails at all hours to finding new ways to get noticed during a time where consumers are buying what they know.

"That said, we’ve pivoted quickly, and I’m so proud of how the BABE team came together through Slack, Zoom, Text, WhatsApp and other platforms to pull all this off in less than 10 days. Countess Luann watched our game show; what could be better than that??"

Phillips added: "We already felt that wine was an essential, but based on the results of the giveaway, it showed us how important the beverage category is at this time, and how it’s our job as a brand to continue to bring relief to our consumers."