In the current political climate, most brands are understandably reticent about taking sides. But Audi is diving in headfirst to a vocal backlash stemming from its just-released Super Bowl Commercial.

The spot, which debuted yesterday, focuses on a father’s anxiety about raising a girl in a world that favors men, particularly when it comes to salaries. "Do I tell her that her grandpa’s worth more than her grandma?" wonders the voiceover. The commercial, created by Venables Bell & Partners, ends with the message: "Audi of America is committed to equal pay for equal work."

On Facebook, the automaker posted the ad with a message: "Women are still paid 21% less than men. As a brand that believes in progress, we are committed to equal pay for equal work. #DriveProgress."

The backlash started immediately. Commenters on Facebook, Twitter and YouTube took issue with Audi’s statistics and began accusing the company of liberal bias. The video, which has been viewed more than 2 million times in the first 24 hours, has racked up a staggering 19,000 "dislikes" to just 1,000 "likes."

@Audi You pay your female employees less than males? You know that's against the law, right?

The debate itself—at least among those providing cogent arguments—is familiar. Those who support the commercial note that that American women earn 79 percent of what their male counterparts make, based on last year’s report from the Joint Economic Committee Democratic Staff. Critics point to the Equal Pay Act of 1963, which makes it illegal to pay a woman less than a man for the same job. They are also citing other factors they say aren’t taken into consideration, like maternity leave, education and part-time work.

Conspiracy-minded critics claim that Audi is trying to distract the American public from the news that its parent company Volkswagen just agreed to compensate the owners of its 80,000 polluting vehicles, which includes Audis, at least $1.22 billion.

What’s surprising is Audi’s response. Rather than stay on the sidelines, or deleting angry Facebook comments, the brand is wading in and defending its claims. 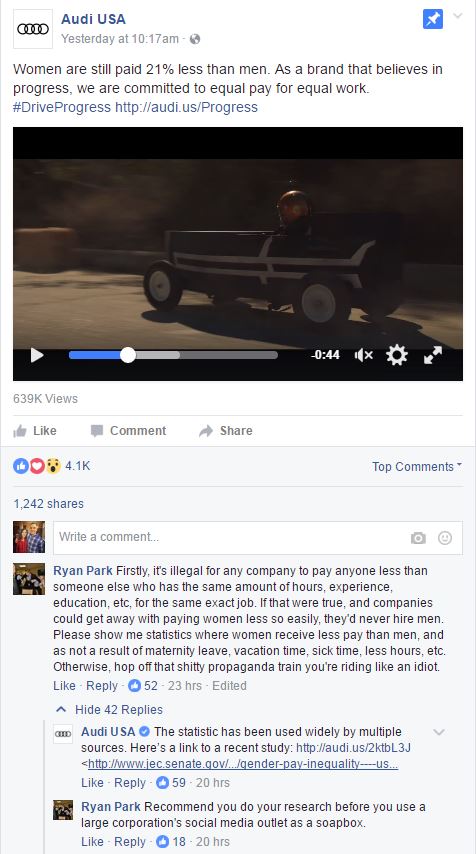 The brand didn’t even ignore Jessica Buchberger, who pointed out on Twitter page that Audi’s executive team includes only two females.

@BuchbergerJm We have pledged to put aggressive hiring and development strategies in place to increase the number of women in our workforce.

So far, Audi, which didn’t immediately reply to a request for comment, has remained largely stoic in its responses, providing statistics and then staying above the angry back-and-forth. Whether its changed any mind is unclear, but this is just the prequel. The Super Bowl commands an audience of 110 million people, so Audi can expect another wave of comments this Sunday.

Audi built a moon rover for 'Alien: Covenant' that is actually going to the moon

To win back trust, VW goes big on longevity

Q&A: Twitter's head of brand strategy Alex Josephson on how to deflect Trump and tackle the Super Bowl

HP and Visa 'walk the talk,' donate funds to #FreeTheBid