A star of reality TV show Geordie Shore is the latest celeb to be told off by the Advertising Standards Authority for failing to identify social media posts which were part of a commercial endorsement.

The body today upheld two separate complaints against Marnie Simpson - both of which relate to snaps sent on Snapchat in June. 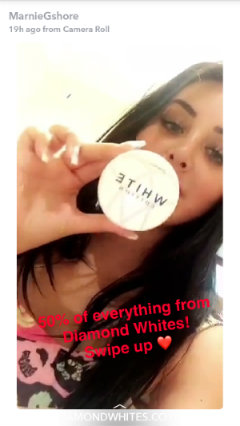 In the first case, Simpson sent a snap of her face (right), the logo of Diamond Whites and the text "50% off everything from Diamond Whites! Swipe up [Heart emoji]". The second (below right) included an image of Simpson wearing grey contact lenses, with text stating: "[Heart emoji] mrs grey coming soon."

In both cases, a complainant asked whether the snaps were obviously identifiable as a marketing communication.

In the Diamond Whites case, the company said it believed Simpson's followers would be aware of her longstanding relationship with the tooth polish brand.

The snap in which Simpson was wearing contact lenses was a promotion for a range of contact lenses called iSpyEyes, which she had recently launched alongside Unleashed PR - the agency is named on the ASA report as the company behind the promotion.

Unleashed PR was set up in 2008 by Emma Handley and Craig Johnson-Pass, the latter a former staffer at Outside Organisation. It provides PR and talent management services.

The agency told the ASA that the post did not explicitly refer to the lenses nor mention the product's website, and that consumers who were aware of the product would not have known where to buy them from the snap. 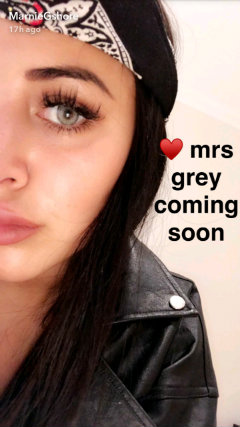 In both cases, the companies were told that they were responsible for ensuring that communications sent on their behalf were compliant with the CAP Code, and that the snaps should not appear again without such a note.

Both companies said they would look into using relevant hashtags, such as #ad, in future.

As snaps disappear after 24 hours, the two posts in question were not ordered to be removed.

ASA has now made three formal rulings this year on non-disclosure, following another in April involving a detox tea brand, as well as informally resolving eight such cases. This compares with two formal non-disclosure cases in 2016, and three in 2015. There were 17 informally-resolved cases on non disclosure in both years. The ASA has received a total of nearly 4,000 complaints since the start of 2015.

Last month, another Geordie Shore star was told to remove an Instagram over the health claims it made about the same detox tea brand.

The regulator has reminded agencies and influencers to label content in line with is code on a number of occasions this year.

M&S scores win over Iceland in clash of the crumpets

Blood is the new normal: Why Bodyform and Libresse took a marketing risk for a campaign about periods

Why media partnerships are worth more than the trouble

How the ad industry can change the future for female founders