Devised by creative agency BD Network, the new nationwide experiential campaign follows the launch of a pop-up concept store, and it aims to engage with, and inspire, a younger foodie audience.

The brand has created a modern Scandinavian-style kitchen, with live theatre chefs on hand to deliver a bespoke experience for commuters, including a personalised cheeseboard for them to try.

The Art of Smorging – inspired by the Scandinavian Smorgasbord – aims to provide a modern alternative to the traditional cheeseboard, where friends can get together and share cheese paired with other foods.

The pop-up will be touring eight UK locations comprising six train stations and two shopping centres, in cities including Liverpool, Manchester, Leeds, Birmingham and Bristol throughout July and August. 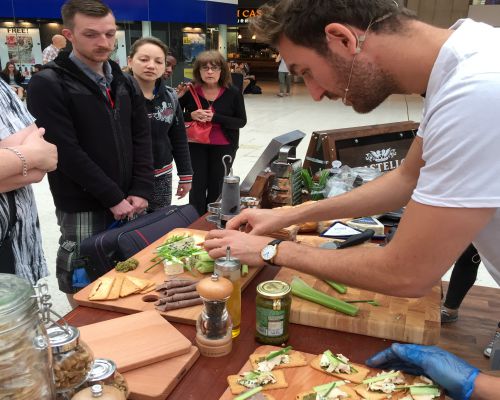 Visitors to the pop-up kitchen will receive smorging boxes, containing three mini Castello cheeses to take away, a guide to smorging and discount coupons.

"We worked with Scandinavian chef Trine Hahnemann to develop the idea along with a host of Smorging recipes and pairings to inspire consumers, which are available on our website castellocheese.co.uk."

The Smorg Station pop-up will remain at London Victoria until 7pm tonight, and is set to stop off at Cabot Circus in Bristol on 28 July.

In pictures: The Laughing Cow embarks on cubic sampling tour